Heaven Came Down and Healing Filled Our Souls

By chogministries
Posted July 31, 2013
In All Church of God, Global Gathering, Global Strategy
Heaven Came Down and Healing Filled Our Souls2013-07-312013-07-31https://www.jesusisthesubject.org/wp-content/uploads/2016/07/ChogLogo-Light.svgChurch of God Ministrieshttps://www.jesusisthesubject.org/wp-content/uploads/2016/07/ChogLogo-Light.svg200px200px 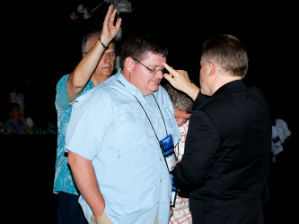 Five years of excruciating pain. It all started with an accident that left Paul Poorman with infinitesimal shards of glass littered throughout his leg. The seemingly endless trips to the surgeon, countless consultations, and inconclusive diagnoses did little to ease the pain or the frustration Poorman and his wife were facing. Perhaps no one but God knew what a difference the Global Gathering would make in their lives.

On September 8, 2008, while working at a recycling plant, Paul’s life took a dramatic turn for the worse. When a faulty conveyor belt needed attention, Paul knelt down on a bed of milk jugs and one of them popped. Unknown to Paul was the glass resting underneath the milk jugs; when the jug popped, the glass object exploded and sent tiny pieces of glass into his leg. The emergency surgery to repair the lacerations sewed shut the glass under his skin. Since then, more than five hundred pieces of glass have worked their way out of Paul’s leg, either through surgery or on their own. In the meantime, this condition, which has baffled doctors, has left Paul debilitated, unable to work, and constantly reporting pain at 8 on a scale of 1 to 10. While some doctors dismissed the issue due to scans that could not detect the subcutaneous glass, others confessed that he would simply have to live with the shards buried deep within—as well as most of the accompanying pain.

This past March, Paul had a final surgery, which extracted seventy-five more pieces of glass. The nerve damage had already been done, however, and the pain would not subside. Swelling in his leg forced him to walk with the aid of a cane and prevented him from coming to the North American Convention in recent years. But this year, Paul and his wife Jodi decided to make the trek to Anderson for the Global Gathering.

“He’s been anointed several times at NAC in the past, but never saw improvement,” Jodi explains. “This year he decided to go up and there was something different. Paul didn’t really want to go up to be prayed for again, but felt like God was leading him.”

“God, if you want me to come up there,” Paul prayed, “Bring Don Smith down [to offer anointing].” Don Smith, Go Link and Project Link specialist at Church of God Ministries, had been a positive influence on the family years before, had not been scheduled to serve the Global Gathering as an anointer during Tuesday evening’s healing service. Don had seen that long lines were forming to receive anointing nearby, so he promptly stood to serve. “I was basically sitting there, and I looked up and saw Mr. Smith sitting on stage,” Paul recounts. “He came down and stood right in front of me, so I had to get up!”

Healing did not come instantaneously. Paul did not suddenly look down upon a brand-new leg. But as he returned to his seat that evening, he and Jodi both felt a sense of divine intervention. After the service, they went back to their room and noticed that the swelling had gone down in his leg. The next morning on the way to the General Assembly, Paul noticed his leg wasn’t grinding anymore as he walked, and the swelling had not returned. The next week at a medical checkup, doctors were flabbergasted to report that the muscle in his leg had improved by 200 percent!

While the pain has not altogether disappeared, Paul and Jodi are celebrating a healing work that has begun. Back at their home church, Fox Street Church of God in Franklin, Pennsylvania, a revival of prayer was sparked by their testimony. The Sunday following the Global Gathering, the pastor did not preach; instead, Paul, Jodi, the pastor, and others shared how God worked in their lives at the Global Gathering. They held their own anointing service, and the Spirit moved in a powerful way. The church continues to take prayer more seriously than ever, and healing of a variety of kinds is spreading across the congregation.

But why was it that God waited five years to begin his healing work in Paul’s leg? “I think it was perfect timing. He’s doing so many things in our church because of this. There is a whole new spirit going on here. Through it all I have learned a lot, a lot about myself, a lot about my journey with God. He’s given me some down time, maybe, that I’ve needed in my life to get into his Word and learn more about him. Now at this point in my life, I can explain that to people. He’s shown me so much and how to rely on others and on him.”