Hawaii Happenings: Reaching Across the Isle

By chogministries
Posted February 5, 2015
In All Church of God, Western
Hawaii Happenings: Reaching Across the Isle2015-02-052015-02-05https://www.jesusisthesubject.org/wp-content/uploads/2016/07/ChogLogo-Light.svgChurch of God Ministrieshttps://www.jesusisthesubject.org/wp-content/uploads/2016/07/ChogLogo-Light.svg200px200px 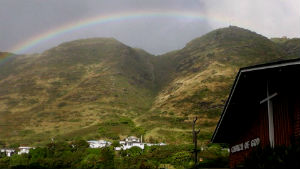 Photo: A rainbow reminds the Aina Haina Church of God that God keeps his promises.

As the crow flies, 4,358 miles separate Anderson, Indiana, and Honolulu, Hawaii. Activities and events that bring the Church of God together, such as the Church of God Convention, aren’t just a three-hour drive, or even a four-hour flight. While the Church of God in the continental United States enjoys multiple fellowship opportunities throughout the year, the Church of God in Hawaii often feels disconnected. Through the years, Aina Haina Church of God has faced great ministry difficulties and outreach challenges in isolation. Things are about to change.

The Holy Spirit’s work was evident in the planning of a meeting in late 2014 with the Aina Haina congregation, former Aina Haina pastor Bob Christensen, Handel Smith from Church of God Ministries, and Steve Robertson, who serves as the regional pastor of the Church of God Association of Northern California, Northern Nevada, Hawaii, and Guam. Bob, Handel, and Steve each felt the leading of the Spirit to spend significant resources and time to make the trip to the Aloha State—and not for a tropical vacation. In fact, when you’re assignment is ministry in Hawaii, it won’t be a picnic. 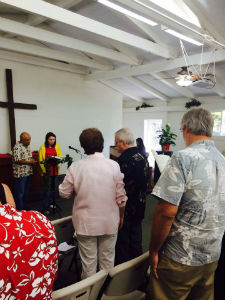 “The culture in Honolulu is very different from what it is here in the Midwest,”Handel explains. “Trust is very important to Hawaiians. It takes time to build trust and relationships with people. We also discovered that, in the area where the church is located, the average age is between fifty-two and eighty-two. The homeless rate is also really high in Honolulu. Because the weather is so wonderful, the government doesn’t provide shelter (though they do provide benefits). Shelter is at a premium because of space limitations and cost. So there is a significant homeless population there that is looking for Jesus.” As Bob Christensen explains, Hawaii is diverse, with Korean, Japanese, and Chinese influences. “It’s a difficult place to win believers,” Bob explains, “We’re right next door to a Taoist temple and close to a Buddhist temple. There’s a lot of turnover, even though the church is in a stable neighborhood. And the economy is expensive—a modest house will run you $600,000.” 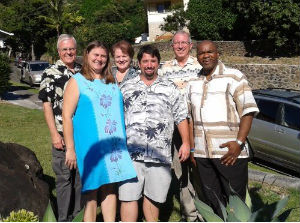 Bob, Handel, and Steve knew it was time to re-establish a life-giving connection with the Church of God in Hawaii. But they had to rebuild some trust. “Initially, it was perceived by the congregation that Church of God Ministries had taken entirely too long to connect,” Handel reflects. “We had to rebuild trust. But then the subject of our conversation became Jesus. We spoke about Jesus. We asked for forgiveness. We asked for an opportunity to partner in helping the church to reach their local community for Christ.” Though the past wasn’t pleasant, and though hell had won some battles, a new day was dawning late last year for the Church of God in Hawaii. “We took a stand for Jesus, and reclaimed that which the enemy had stolen,” Handel recounts.

The meeting focused on finding ways to support the local pastor and congregation. Leadership development resources were discussed, including the Church of God Ministries Be Bold Academy—details coming soon! Coaching relationships were established with pastors across the Pacific, and long-term relationships were initiated. In a creative gesture of goodwill, the group from the lower forty-eight states treated Pastor Billy Pearson and his wife to a date night! “With Steve Robertson coming all the way from California, and with Handel Smith coming all the way out from Anderson, we really felt supported and loved,” Billy explains. “It was both encouraging and edifying.”

On Sunday, what God had accomplished in just a few days culminated in a powerful worship service. “There was excitement, there were tears, and the presence of God was truly in that place,” Handel recalls.

For the “True Story of Ministry in Paradise,” read this CHOGnews article from May 2013. Learn more about the Church of God at www.JesusIsTheSubject.org.