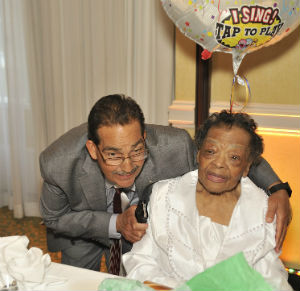 Photo: Benny Santiago embraces Hattie Downer at her 100th birthday celebration. Benny’s was one of countless lives changed because of the ministry of Hattie Downer. Photo credit: Richard LaGuerre.

She was the first African American woman to serve the Church of God as a home missionary. She traveled up and down the East Coast, starting Sunday schools and other children’s programs for churches. Ultimately, she made her base of ministry operations on the crime-stricken, drug-infested streets of Brooklyn, New York. There she preached the gospel to local characters with nicknames like “Killer” and “Capone.” She even extended grace multiple times to delinquents who would break in and steal from the church she led. This pillar of faith, rock of endurance, and epitome of compassion has a name: Hattie Downer. She celebrated her one hundredth birthday in September, and many who have been touched by her ministry came to honor her and share stories of personal impact.

One person dramatically touched by Sister Hattie’s compassion for the people of Brooklyn was Benny Santiago. Benny, who currently serves as a chaplain for the Madison County Sheriff’s Department in Indiana, didn’t used to spend his time on such noble pursuits. Addicted to a variety of drugs during his growing up years, Benny’s life was anything but smooth. Lured by gangs and trapped by alcohol, he began to recognize that his life was going nowhere fast. Hattie Downer would often stop by the store where 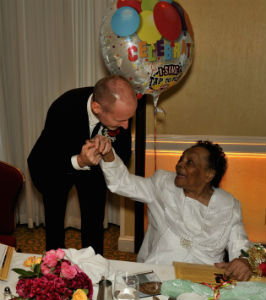 Benny worked as a butcher, and each time, she invited him to church. On Good Friday in 1979, Benny was driving by the church he knew Hattie pastored when God spoke to him. The church doors opened, as if to welcome him in. He pulled to the side of the road and stared in awe at those doors, which were glass. There was no one on the inside or the outside. Benny gazed up at the trees. There was no wind blowing. Then the doors started flopping open and shut.

“I said that must be God telling me, ‘Hurry up, I’m tired of holding the door open for you!’” Benny got out of the car, and there was Hattie Downer. “She said, ‘So you’re looking for Jesus. You’ve come to the right place.’ I protested, ‘Well, I’m not ready yet.’ She said, ‘Jesus loves you.’ I said, ‘But I’m shacking up.’ She said, ‘Jesus loves you.’ I said, I’ve got cigarettes, I’m involved with gangs, and you don’t know my background.’ She just kept saying, ‘Jesus loves you.’” Soon after, Benny went on to tell everyone he could about the change Jesus had made in his life, and he has never been the same.

Benny explains that Hattie Downer was one of the first African Americans in Brooklyn to minister to Hispanics. The neighborhood of Williamsburg Church of God, which ultimately became Cathedral of Joy, was in a constant state of change over the decades that passed while Hattie served there. Though it might have been easier to abandon that community and minister elsewhere, she remained. “If God didn’t say move, I didn’t move,” she explains. “I just had to ignore the winds of change and change only when he 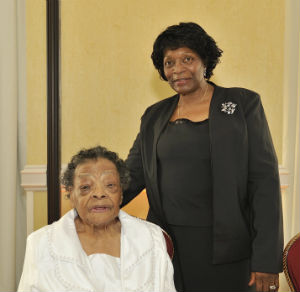 would tell me to change. I was placed there by God, not people.”

As a home missionary for the Church of God, she was noted for feeding breakfast to schoolchildren, helping parents with housework, and starting a professional-quality library in her church office for the community to enjoy. “She worked tirelessly to make sure all children would know about Jesus,” Norma Canty, current pastor of Cathedral of Joy Church of God, explains. “She said she never married because she never really wanted to have children but to be a mother to all these other children.”

Even when a young man named Henry Lopez, caught up in a variety of illegal activities, needed a ride to Sunday school, Hattie gave him a lift. In fact, her love for children led her to pick up any and all children that wanted to attend. Henry, who would one day stab and wound the feared neighborhood “Killer,” and also nearly bleed to death from shots fired in retaliation, would one day also bear the fruit of the seeds Sister Hattie constantly sowed in his life. Today, Henry Lopez also serves in ministry, and he and Benny Santiago are good friends.

When asked what wisdom she would offer to young ministers in the Church of God today, Hattie says, “Be careful in your life and ministry. Don’t lie, don’t cheat, don’t be evil-minded. Especially young men—be careful around young women. Be sure you know what you’re doing by the Spirit of God, not just because you have an ambition. And always be ready for criticism from people, from friends, and even from family.”

Charles Naylor’s “On to the Goal” has served as the theme song for Hattie’s entire ministry. When she was treated unfairly and when the storms of life threatened to derail her from God’s track for her life, she kept pressing toward that goal. “Never mind what the others do,” she chants. “On to the goal keep pressing; they cannot run the race for you, on to the goal keep pressing!”