The spoken word of God is powerful. Church of God Ministries recognizes this and devotes time and energy to spreading the gospel through Christians Broadcasting Hope (CBH), reaching the world in nine languages. The CBH Portuguese-language team, based in Marechal Cândido Rondon, Brazil, has added a vital literature ministry to their broadcasting programs, and that program received a much-needed shot in the arm in 2020. Just when Ecos da Liberdade (Echoes of Freedom) was running low on inventory, a surprise offer from a struggling printing company allowed for the creation of more than 1 million pieces of evangelistic literature to fill the stock room to overflowing.

“Here in M. C. Rondon, Brazil, I had the privilege of working alongside my father, pastor Mário Hort, for twelve years. God took him to glory on October 9, 2019,” writes Isai Marcel Hort. “We have a great mission ahead of us. We are continuing this beautiful radio and literature work that burned in my father’s heart. God has done great wonders through these means of communication.”

Each of CBH’s language teams is given the freedom to create what their ministry will entail, according to John Walters, CBH director for Church of God Ministries. In the case of the Brazil-based Portuguese team, “It’s these little booklets,” he explained. “Mário Hort, when he was alive, produced them in the hundreds,” Walters said. “They travel the country and leave them at hospitals, prisons—wherever they think they would do the most good.” 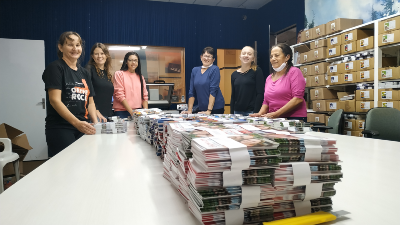 The idea of writing his own small books for evangelism came to Pastor Mário Hort several decades ago. He became speaker/host for the Portuguese team of CBH in 1979 and, before long, began authoring topical, evangelistic pamphlets.

“The delivery of evangelistic pamphlets is no longer as common or very welcome,” his son, Pastor Isai Hort, said. “Precisely for this reason, the way in which our material was printed changed a few years ago. Today we no longer have pamphlets but small books. We believe that there are some things that make our literature welcome for readers. It is not a simple paper, but a small printed book with good quality. The themes are eye-catching and have a direct message. We use bright colors and pictures of people, children, and situations that represent daily life. The texts bring living testimonies. It is an easy read for anyone to understand and feel invited to accept Jesus. Many themes are geared towards family and marriage. The testimonies of marriage restoration are inspiring.” 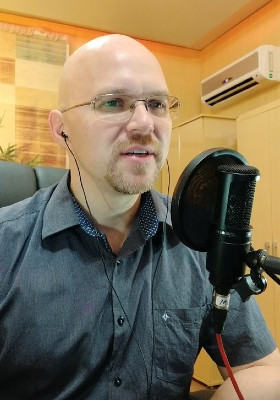 Thanks to the reach of the Internet, the weekly broadcast recordings produced by Isai Hort and his team are heard in many nations around the globe—Brazil, Paraguay, Argentina, Mozambique, and Angola, among them. But the literature effort is more geographically limited. It is dependent on postal services and foot-power for distribution, and therefore primarily serves populations in southern Brazil. Nonetheless, it is still a large and impressive operation.

“Our radio programs are recorded weekly in our studio. The recorded programs are placed on our website where broadcasters download and retransmit in their cities,” Hort said. “The largest of these is Rádio Transmundial, which broadcasts to the city of São Paulo, which has 12.33 million inhabitants.

“In our podcast, we offer our (free) literature to everyone who wants to do evangelism using our booklets. The listeners write e-mails stating what titles they are requesting, and we have an organization of hired and volunteer people who prepare the packages that are sent by mail.”

“God has been merciful and has saved lives through this work,” Pastor Hort writes. “In 2020, the year of the pandemic, we had the privilege of printing a large number to replace our stock that was running out. The normal cost of printing a booklet is 0.24 centavos each (US$0.045). The printers were stopped due to the pandemic. A printer that knew our work had a high stock of paper and offered to print the booklets at less than half the usual cost.

“We passed this opportunity on to the church and invited everyone who wanted to contribute to get as many booklets as possible. After this fundraising campaign here in Brazil, plus the help that came from CBH in 2020 (36,660.60 Brazilian reals/US$6,650), we were able to print over 23,000 copies of 45 different themes, totaling 1,040,000 booklets.”

Of the 45 themes, 31 had been written by Pastor Mário Hort, 11 were written by Isai Hort, and 3 were by other authors. 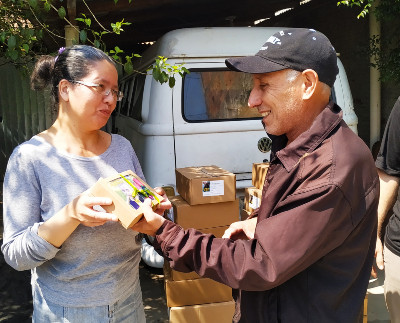 Distribution of the evangelistic literature.

“The church held a celebration and dedication service of this literature that is distributed with so much love and work by several evangelists throughout Brazil, mainly in the southern region.”

John Walters of CBH said the Portuguese-language team was the first one established after the English-speaking and Spanish-speaking programs.

“It has been one of the most evangelistic and productive of all our language efforts through the years,” Walters said. “Their innovation, initiative, and creativity have led to a variety of efforts and styles through the years. All with the desire to tell people of the hope of Jesus and lead them into a personal relationship with him.”

Watch this video (in Portuguese) on YouTube of a well-produced, nine-minute glimpse of the Ecos da Liberdade literature program. Learn more about Christians Broadcasting Hope at www.christiansbroadcastinghope.org. 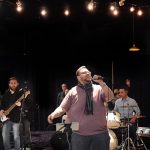 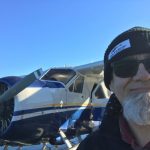