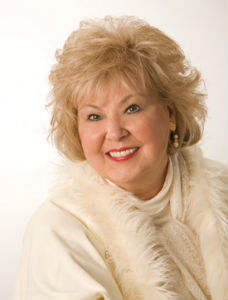 The Anderson University School of Music, Theatre, and Dance will present Gloria Gaither with the 2013 Outstanding Music Alumni Award during chapel on Tuesday, Oct. 22.

For more than 50 years, Gloria and her husband, Bill Gaither, have shared a mutual commitment to a larger purpose. Their union has produced more than 700 songs, hundreds of recordings, numerous awards, a dozen musicals, a collection of books, and best of all, three children and seven grandchildren. In affirmation of their vast contribution to the gospel music industry, they have been recipients of many Grammy and Dove awards, the ASCAP Songwriters of the Century Award, and induction into the Gospel Music Hall of Fame and Museum.

Gloria’s writing spans a wide range of subjects and genres: children and family themes, devotional encouragement for women, social commentary, scripts for video format, song lyrics, and magazine interviews. Her written work grows out of an irrepressible habit of journaling. Gloria has always been a student of literature, with special interest in the works of John Steinbeck, and has contributed papers and reviews on his writing in a variety of academic settings.

She has written more than 40 books, including titles for adults and children, and created scripts for more than 100 videos. All of these pursuits have won her the respect of the academic community, and she has received honorary doctorates from six universities, including an Honorary Doctor of Humane Letters from Anderson University in 1989. Out of a sincere heart to help young adults pursue excellence in their respective fields through Christian education, she has been a dynamic voice serving on the board of directors for both the Council for Christian Colleges and Universities and the United Christian College Fund. Gloria maintains an extensive speaking schedule. As an advocate of family preservation, living in the moment, and unadulterated discipleship, Gloria has touched the hearts of audiences everywhere with her simple yet profound message.

Bill and Gloria Gaither will introduce the 40th Anniversary celebration and performance of Alleluia! A Praise Gathering for Believers on Friday, Oct. 25, 7:30 p.m. in Reardon Auditorium. The concert is free and open to the public. The performance will feature the AU Chorale and area church choirs. See full homecoming schedule.