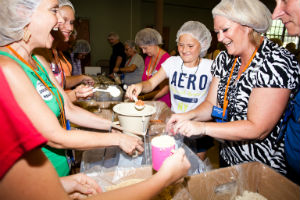 What better time and place than the Global Gathering of the Church of God to address global hunger and clean water issues. On Monday afternoon, at the Kardatzke Wellness Center, Ray Sanders, CEO of Water4 Foundation (www.water4.org), and John Steffens, of the University of Oklahoma, co-led a session that brought a new perspective to providing clean water and food.

Sanders explained that Water4’s method is a 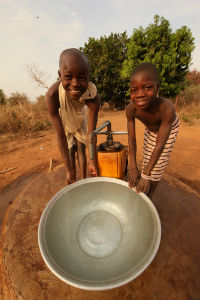 simple mechanical pump that is affordable, replicable, and lifesaving to the five thousand children endangered daily by water-borne diseases. Water4 is able to show communities that access to clean water is within their control by training, equipping, and supporting nationals, thus creating independence rather than reliance on outside aid. This transfer of technology allows men and women all over the world to develop their own water systems, and has become a gateway for missionaries to introduce the Living Water as well. Steffens added that once this well is developed, the land around it can be cultivated to provide food and a source of income to many families in the same community.

Later in the afternoon, hundreds gathered to pack meals for Change This World, meals that have been formulated by food scientists to provide a rich source of easily digestible nutrients needed by a malnourished person’s body and mind. You could sense the harmony and joy as the group worked the assembly lines to reach more than 250,000 meals by the end of the gathering.

I am writing this story while sitting in an air-conditioned room, mere feet away from a vending machine for snacks and refreshments to keep me hydrated and satisfied. What a contrast! To be only thankful for God’s blessings is not quite enough; being his agents to make such simple essentials available to everyone on earth is a mandate. As we move forward toward being a twenty-first-century movement, our mandate is to present Matthew 25 as a solution rather than a bandage. In other words, sustainable ministry models ought to be the new normal as models to follow in fulfilling our mission.