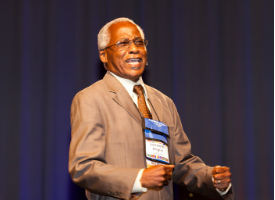 Renewed hearts were filled with eager anticipation Tuesday evening in a spectacular demonstration of faith as the more than three thousand attendees took part in the final worship and anointing service of the 2013 Global Gathering.

Spanish worship leaders Ualesca and Omar Rojas, of Elemento Basico, kicked off the night and led the audience in a time of spirited worship featuring songs like “We Are Free,” by Matt Redman, and “Glory” (translated from “Gloria”), written by Omar Rojas himself.

The theme of the night was “Celebrating the Unity of the Holy Spirit,” and keynote speaker Lenworth Anglin, executive chairman of the Church of God in Jamaica, acknowledged that while this is important, he reminded us that we would do better to celebrate “the power in the unity of the Holy Spirit.” 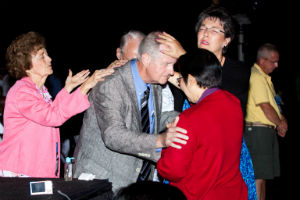 He challenged us to remember that we, ourselves, do not create unity, but that it is God who creates unity—that it comes not through human actions but through the power of the Holy Spirit. Therefore, Anglin noted, our role is in preserving, rather than creating, this unity.

“The Holy Spirit breaks down barriers and builds up bridges!” he exclaimed, jumping around on the stage in undeniable joy. “When the church begins to pray together, miracles are guaranteed!”

Anglin concluded by encouraging the church to endure and to continue making the journey together. There were truly fitting words for the time of anointing that followed.

After Earl Wheatley shared his miraculous testimony of how the prayerful unity of the church helped to defeat his pancreatic cancer, we came forward one-by-one to be anointed with oil—each of us asking the Lord for his blessing on our lives.

The night concluded with all of the international delegates gathering near the stage and the lighting of ceremonial candles representing the more than sixty different countries from which they have travelled—and to which they will eventually return renewed with the power of unity found in the Holy Spirit.