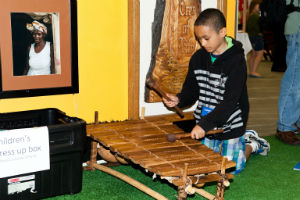 More than a week has passed since the Global Expo was moved out of the O.C. Lewis Gymnasium on the Anderson University campus. The lumber that was once the backdrop for Africa, Asia-Pacific, Caribbean, Europe-Middle East, Latin America, and North America now resides with Habitat for Humanity and is awaiting use for construction in partner homes. After months of meeting and planning, the event is complete. The staff of Global Missions now gets to pause for a moment and reflect on how God was present.

“The stories coming out of the prayer garden are amazing,” shares Living Link specialist, Debbie Taylor. “God really showed himself. I am going to make a scrapbook dedicated to the prayers of so many that were brought during the event.”

A highlight for the young and young-at-heart seemed to be the beach and shell display in the Caribbean exhibit. One child was heard running from the “beach” excitedly sharing, “Look, Mom! I found four shells in the sand! I think I even heard the waves, too!”

Connection between people was constant throughout the Global Expo. Daniel Kihm, missionary elect to the Netherlands, was energized by the people that came through the Europe-Middle East exhibit. “I was there from basically 8:00 am to nearly 11:00 pm every day,” Daniel recalls. “I might have gotten tired, but I thrive on being able to tell our story to so many and to get to hear their stories in return. What a great time.” 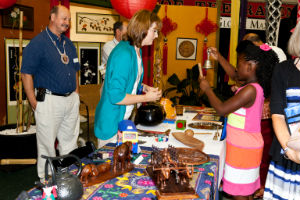 North American display, more than a hundred churches signed up for Focus 40, a forty-day journey with God that is organized by the Church of God Ministries Transformation Team. “That’s a real head start on any other year,” says Randy Montgomery, leadership development and congregational health co-director. “We’re very excited about those commitments from churches all over the country.”

The Global Expo accomplished the goal of bringing the world to Anderson. In the Asia—Pacific exhibit, a family of five arrived, took off their shoes, poured hot tea for every member, passed out cookies, and prayed together as they sat amidst the pillows on the floor. When they finished, the children turned to missionary Don Armstrong and offered a culturally-appropriate bow.

The Expo also brought the world to Anderson literally through modern technology. In the African exhibit, missionary Tim Stevenson and son Logan, along with African regional coordinator Ben Shular, set up live Internet feeds of Africa. Those who strolled through the exhibit were able to stop and watch the activities of wild animals as they were actually occurring halfway around the world.

Hundreds of people preserved their experience as they had their picture taken with the Christ the Redeemer statue from the Latin America exhibit. However, the experience goes beyond that of pictures. “People learned about other churches from around the world,” Kathi Sellers, recruitment and member care for Global Missions explains. “They were challenged learn about others in the church and how they can bring that back to their own churches here in the United States.”

More than sixty volunteers contributed over 1,200 total hours to the Global Expo experience at the Global Gathering 2013. “The volunteers were like an army of ants—and that is a huge compliment!” Don Smith, Project Link specialist, shared. “They were truly servants who put together a picture of the world that God loves.”

The blessings of the Global Expo will continue to be shared as those who attended return home and share their experiences. If you have any stories you’d like us to hear about, please share those by sending an e-mail to bhughes@chog.org.