Getting Out and Doing Something in St. Joseph, Michigan

By chogministries
Posted June 17, 2013
In All Church of God
Getting Out and Doing Something in St. Joseph, Michigan2013-06-172013-06-17https://www.jesusisthesubject.org/wp-content/uploads/2016/07/ChogLogo-Light.svgChurch of God Ministrieshttps://www.jesusisthesubject.org/wp-content/uploads/2016/07/ChogLogo-Light.svg200px200px 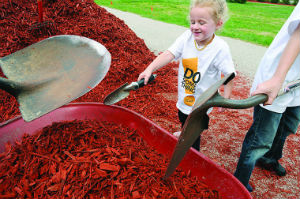 ST. JOSEPH – Sunday was not a day of rest for many members of First Church of God on Niles Avenue in St. Joseph.

For the third year in a row, it was “Do Something Day,” in which an army of volunteers fanned out to paint, prune, clean, cook and perform other good works for numerous organizations.

“It’s kind of what God tells us to do. It’s not sticking within four walls of the church,” said Jenny Fry, one of the organizers of the far-flung endeavor. “It’s about being out and active and taking care of your community.”

She said Sunday that about 950 people served at about 45 sites in Benton Harbor, St. Joseph, Stevensville and other towns.

“Everything went really great,” she said. “It was a good day. The weather held out. We got a lot done.”

She said crews appreciated the cloud cover and were grateful the rain stayed away. 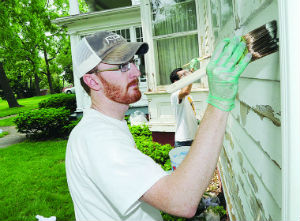 The First Presbyterian Church provided refreshments and shelter from the elements to the volunteers who will be preparing Morton House for professional painters.

One of the objectives of “Do Something Day” is to provide an opportunity for public service to everyone, from children to those using wheelchairs, Fry said.

Along with painting hydrants and light poles and sprucing up parks, volunteers packed military boxes for Blue Star Mothers, made cards for Meals on Wheels recipients and hospice patients, and made frozen meals for the Emergency Shelter for the homeless. Kids held a free car wash.

The church emphasizes that volunteering isn’t just for one day, and encourages members to get involved with organizations “and see that serving is a way of life,” Fry said.

Many took up that calling, volunteering with the 6 Degrees resale center, the Michigan Migrant Ministry and the Safe Shelter for abused women and children.

The church’s “Do Something Day” started three years ago when the Rev. David Colp learned about a similar effort at a church in San Diego.

He preached about the project and the congregation prayed for 100 percent participation from its 1,200 members.

Their efforts have attracted the participation of other churches and some unexpected allies.

This year young people who will leave foster care helped out, developing their work and living skills. Trustees from the county jail pitched in for the second year.

With nearly 1,000 volunteers providing between four and six hours of labor each (providing work that could cost $20 an hour), Fry calculates that the projects provide a big financial benefit.

Fry spent the day moving from site to site, troubleshooting as projects progressed, but said she misses being at ground level.

“It’s kind of a crazy thing, but I drive around and I’m a little envious of the people involved with the projects,” she said.

Of course, it takes those behind the scenes to make it all work, such as distributing box lunches to volunteers.

“I have a deep desire for communities as a whole to be a community, and not separate,” she said.

Ultimately, Fray said, the mission of “Do Something Day” answers the call to service and fulfills the Bible quote “Let your light shine before others, that they may see your good deeds and glorify your Father in heaven.”

Article republished by permission of The Herald-Palladium. Article originally published on June 10, 2013.