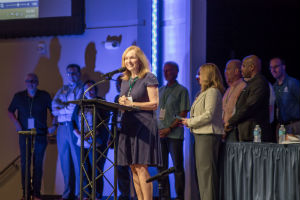 Conducting the business of the church doesn’t have to be business as usual. In fact, this year’s General Assembly looked and sounded much like a worship service had broken out in the Venue at Crossings Community Church. Worship was expected during the times set aside for morning devotions led by Bart Riggins, Leslie Barnes, and Carron Odokara. But at this year’s General Assembly, the variety of business presentations were especially poignant, moving, and inspirational. Dialogue was gracious, the optimistic atmosphere was contagious, and the resolutions that followed exemplified the move of the Holy Spirit to unite the Church of God in 2015 and into the future.

A first for the General Assembly, most of the voting was conducted online. After minimal technological hiccups, the process became more and more user-friendly. Best of all, paper and printing resources were saved in good stewardship. One pastor commented, “I’m glad the Church of God is going through the awkward moments of updating technology. It’ll be worth it.” Before Jim Lyon came to deliver the general director’s report, former TSA administrator John Pistole also spoke to the General Assembly which would later ratify him as Anderson University’s fifth president.

During the voting—marked by significantly higher participation over recent years—Jim Lyon came to the podium to deliver the general director’s report. In a message based on Hebrews 12, Jim emphasized our role as “Jesus people” over our conditioned identity as “church people.” While outlining several key updates in the life of the movement, Jim exhorted the gathered pastors and lay delegates to stop simply talking about holiness, but to actually live it out. “Running the race isn’t always easy,” he explained. “Jesus ran the race, and look where it took him. The church is not the subject. Jesus is the subject.” To these wise words and more, Jim received a standing ovation for the second year in a row. In response to the address, Stephanie Collins, NextGen pastor at The Gathering in Muncie, Indiana, said, “Never been so excited about the future of the Church of God. It is good to dwell together and be led by Jesus people.”

Some may have thought they’d missed Wednesday’s GA session and stumbled upon the first worship service of the day. The session featured Rebecca New-Edson, who has served the Assembly faithfully as chairperson since 2012. Her address to the General Assembly was powerful, hard-hitting, and memorable. “The only thing that makes Christian unity possible is the recognition that Christ is King,” she exclaimed. “We are to further Christ’s agenda, not our own.” Then, in a rallying cry to follow the Holy Spirit’s leading in this new day for the Church of God, Rebecca warned, “There may be risk in moving away from the status quo, but most assuredly there is risk in staying there.”

At this year’s GA, we celebrated the increase in giving to the unrestricted portion of the budget. We celebrated more than half a million dollars coming in so far for CHOG TraffickLight—the Church of God fight against human trafficking. We celebrated record-high online engagement of both General Assembly sessions and worship services. And, as an added bonus, each member of the General Assembly received a complimentary copy of Jim Lyon’s new book, published by Warner Press, called Jesus B.

Several resolutions also passed with overwhelming support. A resolution passed concerning updating and revising the constitution and the bylaws of the General Assembly and Church of God Ministries—bringing consistency and clarity to the language. A resolution also passed to improve and streamline the credentialing process across the board and across the country. Regarding the Church of God Convention, a modified version of the proposed resolution passed to allow for the following: regional meetings during the even-numbered years when the International Youth Convention is held; a larger Church of God Convention during odd-numbered years; and a convention with a decidedly more international approach every fourth year.

In a beautiful display of the power of the General Assembly to speak with one voice to issues affecting our culture, we passed a resolution denouncing racism and committing to reconciliation. In response, Jim Lyon echoed the palpable sentiment in the room: “Racial division is not the will of heaven. It is the purpose of hell.”

The accomplishments of this year’s General Assembly demonstrated no higher cause, no subject more essential than Jesus. The meeting was noted for its higher engagement, a sweet, sweet Spirit, and the bold resolve to lovingly tackle difficult issues. General Assembly 2015 certainly wasn’t business as usual.

General Assembly documents can be accessed at www.JesusIsTheSubject.org/general-assembly. Look for remaining material to be posted online in the next few weeks. Thank you for your patience.