By chogministries
Posted January 12, 2021
In All Church of God, CHOG, Global Strategy
From Columbus to Colombo: US-Sri Lanka Connections Inspire2021-01-122021-01-12https://www.jesusisthesubject.org/wp-content/uploads/2016/07/ChogLogo-Light.svgChurch of God Ministrieshttps://www.jesusisthesubject.org/wp-content/uploads/2021/01/beverlys_sri_lanka_group_adj.jpg200px200px

Nine thousand miles, ten-and-a-half hours by the clock, and a twenty-two-hour flight time separate Columbus, Ohio, USA, from Colombo, Sri Lanka.* The two cities share similarities as state and legislative capitals, respectively; they have similar populations (898,553 in Columbus and 752,993 in Colombo); and both are large metropolitan areas said to be important commercial centers for their own countries. The Church of God family in Columbus, Ohio, is connected to Sri Lanka in an even more intimate way.

Hilltop Church of God, on the west side of Columbus, has deep roots in the mission to Sri Lanka, stretching back to the 1950s and 1960s when Pastor Ruthven Neff felt led to travel to Burma (Myanmar) and Ceylon (Sri Lanka) to establish a Church of God outreach, before coming back to pastor at Hilltop. In the mid-1980s, a young pastor named Denny Huebner had a long conversation with Borman Roy Sokhia, of Meghalaya, India, and invited him to speak to the Columbus congregation.

It didn’t take long for Pastor Denny to begin traveling across the globe to help train pastors in Sri Lanka to effectively minister to the diverse, multi-ethnic population there. Using his personal experience in dealing with multi-ethnic congregational populations at Hilltop, Pastor Denny was a great practical help.

Since then, two more pastors and three laypersons have made the trek to Sri Lanka from Columbus. In 2007, Michael Leach, who had recently retired from the Columbus Dispatch as a staff writer, joined Pastor Greg Thorne as he led them, teaching communications techniques at a gathering of the Church of God in Sri Lanka.

The current pastor of Hilltop, Steve Anthony, returned in 2019 with two lay leaders, Shawn Hayman and Dan Lantz. They helped train pastors and shared in worship during their trip. In doing so, they have helped to further strengthen the connection between Columbus and Sri Lanka established decades earlier.

Steven and Peggy Beverly, Church of God missionaries for Global Strategy to Sri Lanka, have a long and distinguished history in missions. As the first North American missionaries to the Church of God in Sri Lanka, they minister on the shoulders of many who have come before them. The Beverlys have developed cultural competencies that most people never become aware of in America, as different and diverse as we are. 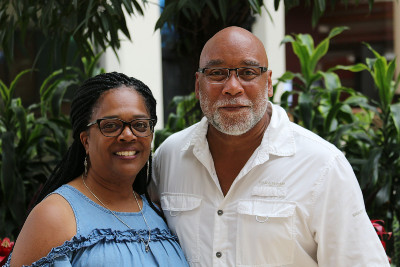 Steven brings clarity to the issue of sharing the gospel cross-culturally. “Cultures are fascinating to us,” he says. “Every culture has characteristics that align with the gospel. But every culture also has characteristics that need to be redeemed and brought into alignment with what Jesus taught us is the culture of the kingdom of God. Our challenge has been to understand our own culture and then to learn how much our American culture influences how we see the world, how we define what is right and wrong, and how our culture influences our behavior and our expectations of relationships.”

Steven continues. “But ministering cross-culturally in Sri Lanka is extremely nuanced. Sri Lankan culture is not homogeneous (just as American culture is not). There are two primary ethnic groups in Sri Lanka (Sinhalese and Tamil) and, not only do they have very different subcultures, speak different languages, and have different religions, they had been at war with one another, literally, for thirty years (the civil war ended in 2009). Sinhalese and Tamil communities don’t often mix. They have separate schools and often live in distinct communities. One of the few places that both Sinhalese and Tamils do mix is in the Christian church. In the church, former Buddhists and former Hindus find unity in Jesus Christ.”

Steven explains the difficulties of shedding their ethnocentrism. “Before we left for Sri Lanka, we self-identified as African American. And while Sri Lankans are quick to identify with the color of our skin—often by tapping their arm and smiling at us—we are not identified by them as African American, but simply as American. And to be honest, we have been surprised ourselves by just how American our thoughts and processes are. Sometimes the difficulty of understanding one’s own culture is likened to asking a fish to describe living in water. Culture is so pervasive, we don’t even think about it until we are taken out of our own culture.” 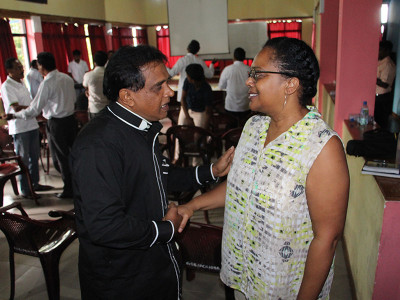 Peggy at a church gathering in Sri Lanka (pre-pandemic).

Steven continues. “Our African-American heritage makes enables us to identify with the oppressed people group in this particular cultural mix of Sinhalese and Tamils. Because of this, we have been able to bring a sensitivity to some cultural nuances.”

Hilltop’s Michael Leach speaks of meeting the Beverlys at Hilltop Church in Columbus several years after his visit to Colombo. “Through a combination of circumstances only God could arrange, Midwestern Hilltop has supported the work in Sri Lanka since its beginning, and Sri Lankan pastors have visited Columbus. I feel the Beverlys’ stellar qualities of warmth, sincerity, and love of God make them a good fit with the Sri Lankan people.”

Many churches do not support international missions to any degree, but regardless of size, every church should consider supporting these efforts, either as a percentage of their budget or a fixed amount designated to Global Strategy. Their gifts can have a profound effect on the efforts to save souls across the globe.

Learn more about Steven and Peggy Beverly, and discover ways to get involved, at https://www.chogglobal.org/team/spbeverly/.

*Note: Colombo, Sri Lanka, was not named after Christopher Columbus; it is, however, Portuguese mispronunciation of the Sinhalese name. 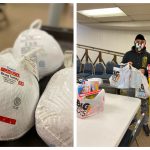 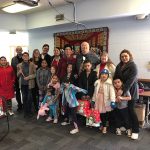