From Bishop Timothy Clarke, Chair of the General Assembly and its Ministries Council

By chogministries
Posted December 1, 2021
In Church of God, MOVE
From Bishop Timothy Clarke, Chair of the General Assembly and its Ministries Council2021-12-012021-12-01https://www.jesusisthesubject.org/wp-content/uploads/2016/07/ChogLogo-Light.svgChurch of God Ministrieshttps://www.jesusisthesubject.org/wp-content/uploads/2016/07/ChogLogo-Light.svg200px200px

Throughout the history of the church, in fact, from its very beginning, there has often been the need for the church to meet, to discuss, to pray, and then to make decisions about her future. At times the issues facing the church were about doctrine. At other times it was about the definition of what it means to be a Christian and, at times, it had to do with personal deportment, what was and was not allowed, even regarding foods consumed and behavior practiced.

We see this for the first time when the leaders of the church in the book of Acts met to discuss how Gentile believers would be included in the life of the church. We later see it throughout the history of the church when councils were formed; again, often to debate doctrine and to decide what was truth, what was error, what was sound doctrine, and what was heresy.

Some of those councils gave the church her creeds and confessions, and each served to give direction and definition to the church. Even in our own Movement there have been occasions when the Church of God had to address critical issues among us.

At times this was done and accomplished through Task Forces, and other times through committees, both select and standing. In many of those cases, resolutions were put forth, debated, and often adopted, that became the “official” position of the Reformation Movement.

For me, two particular events stand out in the history of the Church of God, and they both have to do with the issue of race. There was the decision to ask “Negro” or “Colored” saints to worship among their own, as opposed to worshipping in Anderson, alongside and with their brothers and sisters in the Movement. That decision was made no doubt in an effort to avoid the sting and stigma of bigotry and racism of those who saw issues with, and were uncomfortable with, the races “mixing.” It left an indelible mark on the church, a mark whose vestiges and impact are still being felt.

The other seminal event about race took place in Cleveland, Ohio, in 1970, and has come to be known as the “Black Caucus.” There in the city of Cleveland, Black leaders of the National Association of the Church of God (NACOG), both men and women, met to discuss both the current climate and the future focus of Blacks in America and in the Church of God. That caucus marked a sea change in this Movement, and its impact is also still being felt today.

I set those two events, seminal and significant, before you because, once again, we the Church of God, find ourselves at a juncture and perhaps even a crossroads. Whatever one’s view of history or culture, one truth must be acknowledged—the church, though not of the world, is in the world, and what happens in the world touches the church, whether for good or ill. Whether it was the period when the Ku Klux Klan held sway across the length and breadth of this nation, or whether it was the period following the assassination of Dr. Martin Luther King Jr. and the upheaval in many of our cities, the church is often made to respond to what is going on around her.

That is where we find ourselves today and, then as now, there are some, perhaps many, who wrestle with what it means to be Christian, Church of God, and Black in 2021. The increase and rise in overt racism, the murders of Black men and women at the hands of those sworn to “protect and serve,” the dismantling of so many programs meant to give us a hand up and not a hand out, and the silence of the church at times, have all converged to make many ask, Who are we? Where do we belong? And, what is our future?

To that end, perhaps even compelled by the reality of all that I have mentioned, there is a proposal that is being discussed in the NACOG that seeks to speak to the concerns of some of her constituents. Contrary to what has sometimes been reported, this is not an attempt to secede from the Church of God. In fact, I could argue that that is biblically and even doctrinally impossible to do so; this is an attempt, rather, to have serious conversation around three concerns: self-determination, self-identification, and self-affirmation and actualization.

Now, more than ever, Blacks must ask, especially Blacks in church that are majority-dominated, Who are we? What is our place? What do we leave to our children?

As painful as this may be for some, it is a discussion that must be had, and there are decisions that must be reached. It is my hope that the church will be prayerful, patient, and prophetic as the NACOG wrestles with this issue and burden.

As chair of both the General Assembly of the Church of God in the United States and Canada and its Ministries Council, I pledge that we will keep you informed. The Ministries Council has discussed these developments at length and stands in prayerful support of our brothers and sisters, and for the church as a whole. 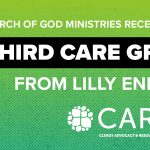