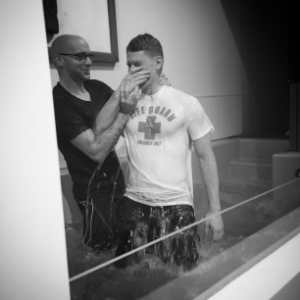 Just one year ago, Jason Jordan and his family took the reins of leadership at West Side Church of God in Poplar Bluff, Missouri. Average Sunday morning attendance in August 2014 was down to 25. The church had entered into a season of decline and discouragement. As the average age of the congregation climbed, cobwebs formed in the baptistery. Flash-forward one year—125 people gather for worship each week, the cobwebs were swept out of the baptistery out of necessity, and up to fourteen infants recently needed care in the church’s nursery.

Jason Jordan grew up as a pastor’s kid, but didn’t hand his life over to Christ until he was in college. Soon after salvation, he heard the Spirit calling him into ministry. For about six years, he poured his life into student ministry. Today he finds himself overwhelmed by how God worked in and through his life.

The Sunday morning that welcomed fourteen babies to the nursery was a watershed moment for West Side and Jason Jordan. It was on that day that Jason knew something big—something beyond themselves—was taking place. Awestruck by the great responsibility God had given Jason and his family, he reflected, “O my, these people are coming. They really are coming, and trusting us with their lives.” 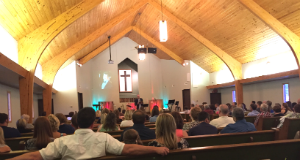 For Jason, the visible success enjoyed by West Side Church of God over the past year reaffirms the basics of what we believe, including Jesus as the subject. “Honestly,” Jason says, “I have read a ton of church growth books, and very few of them mention John 12:32, ‘And I, when I am lifted up from the earth, will draw all people to myself” (NIV). That was the goal from the beginning—to make much of Jesus in everything we did. God is faithful to his word—that’s all there is to it. Between God’s faithfulness and our volunteers’ willingness, that’s what has led to the growth. God gives the growth.”

Of course, there were changes that had to be made. And not everybody likes change. The church recently celebrated fifty years of ministry. As Jason intentionally demonstrated respect and honor to those who paved the way before him, and as he communicated allegiance to God’s Word and preaching Jesus, they also got on board. “The good thing about the transition is that we were very transparent about expectations and changes up front,” Jason explains. “There were no ‘surprises’ down the road of major changes, which started from the beginning. Jesus talks about how fresh wine needs new wine skins in order to be able to grow, as recorded in Mark 2. We changed almost everything, from the building, decorations, to the way to Sunday services were run. Everyone believes in the vision and the mission, and that’s what matters most. We adopt the same motto as the Army—we won’t leave any man behind on this mission!”

Looking back over the past year leaves Jason absolutely amazed. Certainly, growth didn’t come without some growing pains, and not everything came together smoothly. “There have been many challenges,” he explains, “the hardest of which was staying outward-focused rather than inward-focused. With all the changes and updates that needed to take place to the building and all, we started working a lot on ‘ourselves’—and we needed to do so. But now the challenge is to swing that momentum outward.”

The mission of West Side Church of God over the past year has simply echoed the mission of all of God’s church—to make disciples. They’ve kept their vision statement simple, too: “We believe the Christian life is a life transformed by the gospel, experienced in community, and lived out for the glory of God and the good of our neighbors.”

So what encouragement would he offer to other churches who want to experience spiritual and numerical growth? “You have to take risks,” he explains. “I see so many churches and pastors not willing to take risks, or they’re not taking the right risks. It can’t be your agenda—it has to be God’s agenda. I love what Adrian Rogers said about faith: “Faith is believing despite the circumstances, and acting in spite of the consequences.”