Frisbee and Guitar: The Urban Ministry of Two AU Sophomores

By chogministries
Posted November 24, 2015
In All Church of God, Colleges & Universities, Great Lakes
Frisbee and Guitar: The Urban Ministry of Two AU Sophomores2015-11-242020-02-29https://www.jesusisthesubject.org/wp-content/uploads/2016/07/ChogLogo-Light.svgChurch of God Ministrieshttps://www.jesusisthesubject.org/wp-content/uploads/2016/07/ChogLogo-Light.svg200px200px 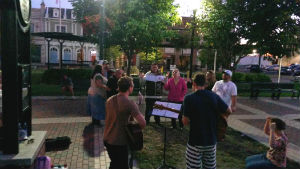 They’re musicians, but they’re not out to make a name for themselves. They sing and play guitar together, but they’re not a band. They lead worship and minister to people on the street, but they aren’t ministry majors. Logan Hauer and Josh Paff are just two Anderson University sophomores who were available when the Spirit said, “Go.” Now nearly every Saturday afternoon, they spend their time in downtown Anderson, Indiana, lifting their voices heavenward and engaging in a ministry of presence among the “least of these.”

The story begins on what was expected to be a particularly busy day for accounting major Logan Hauer. When all his plans fell through, he texted his friend Josh Paff in an effort to fill the void. Longboarding, an activity the two hold in common, was the solution. It was also the activity that took them to a town square in Anderson’s city center. There they encountered a church group playing guitar and worshiping God. While worshiping with the church group, the two learned of a man who had come to hear Logan worship one day. This man had been planning to kill himself that night. Instead, he heard the worship and lifted his eyes to a cross above a downtown church building. He was drawn in by the worship taking place at the town square. Realizing the power of such connections, the two AU sophomores kept coming back, week after week. 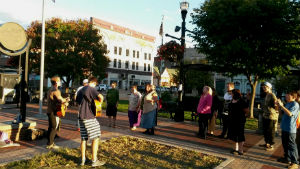 Soon the church group felt called to minister in another part of the community, but Logan and Josh were determined to stay. Each Saturday, Logan and Josh leave the comfort of Anderson University’s campus to hang out with the downtown community. They could be playing video games, shooting pool with friends, or taking an afternoon nap. But they know they’re called to make disciples, and they know that takes time. “If you’re a Christian who’s volunteering to help someone, sometimes it can come off like an obligation,” Logan reflects. “But when you come like this, saying, ‘Let’s understand life together,’ that’s more inviting. It’s easy to donate money, it’s tougher to donate time. When you invest time in someone’s life, it shows that you really care. It’s about the Great Commandment, and it’s about making disciples.”

Josh recalls an experience that was especially meaningful to him—and to a girl who was sitting alone. “I had seen her here the week before,” Josh recounts. “I decided I would just go talk with her. We got into this super-long conversation about life. She’s my age, but she’s been through some of the darkest, most terrifying things you can imagine—stuff that’s happening in our backyard! It disgusted me that people would treat her so poorly. She’s sitting there with a bunch of believers in downtown Anderson. She’s on the fence, but she feels this ‘Jesus thing’ sounds pretty awesome.” Planting seeds for eternal impact, Josh had the incredible experience of praying with her that day.

Throwing Frisbees is one way the two create community. “We try to bring Frisbees to engage them,” Logan explains. “They see us having fun, and that we’re approachable.” Same thing holds true when Logan and Josh play guitar and sing.

“We use music because it’s a bridge to people,” Josh explains. “It’s universally relatable. There’s something within all of us that craves music. So we start singing a song like, “I’m no longer a slave…” and that’s a conversation-starter. ‘What do you mean you’re no longer a slave?’ We’re doing ministry, but not on an agenda. We’re just trying to love people.”

To learn more about Anderson University, visit www.anderson.edu. Were you blessed by reading this story? Support the ongoing work of Church of God Ministries with your gift to the World Ministry Fund at https://www.jesusisthesubject.org/world-ministry-fund/.