By chogministries
Posted April 27, 2018
In All Church of God, Central, Give Life, Southeast
Friendships Forged in Post-Hurricane Harvey Texas2018-04-272018-04-27https://www.jesusisthesubject.org/wp-content/uploads/2016/07/ChogLogo-Light.svgChurch of God Ministrieshttps://www.jesusisthesubject.org/wp-content/uploads/2016/07/ChogLogo-Light.svg200px200px 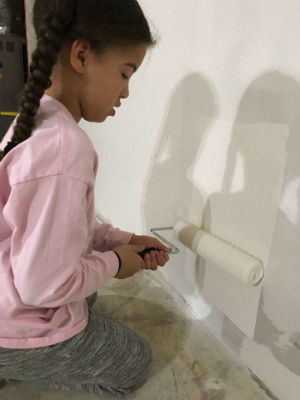 All ages got involved in the building restoration.

When Fairview Church of God of Falkville, Alabama, composed a work team to help with the restoration process at Orange Church of God in Orange, Texas, they expected to encounter hurricane damage. What they didn’t expect was the new and beautiful relationships they gained through the process.

Orange Church of God’s campus suffered eight to ten inches of flooding during Hurricane Harvey last year. In total, the flooding affected most of the property, resulting in some extensive damage the congregation never expected.

“It was really unprecedented,” said Orange Church of God’s Pastor Demo Moffett. “The campus was built in 1974 and had never flooded before. In fact, during other hurricanes, it was used as a shelter.” 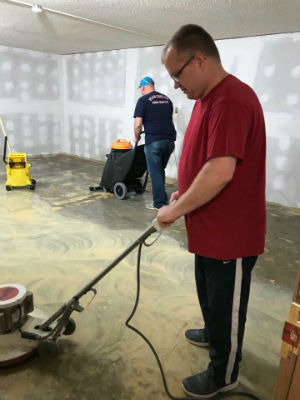 Preparing the floors for resurfacing.

The unanticipated damage called for many hands willing to help bring the campus back to its original condition. Multiple Church of God congregations across the United States answered the need by forming teams to travel thousands of miles to extend help to their sister church. To the astonishment of the Orange Church of God congregation, teams arrived from places as far as Kansas, Indiana, Washington, Louisiana, and Alabama.

“We have been so thankful for the amount of help we have received,” said Pastor Demo. “We have made some great relationships with other churches who have come down here, as well.”

Fairview Church of God’s team, led by Jonathan Warner, was composed of about fifteen participants from the congregation. The team worked hard to sell T-shirts in order to collect funds to help restore Orange Church of God, and while in Texas, volunteered to paint sheet rock, strip floors, and paint concrete.

“Houston receives a lot of emphasis in the media coverage,” said Pastor Milan of Fairview Church of God. “But there were hundreds of square miles devastated by Hurricane Harvey that didn’t get as much help as the bigger cities did. We wanted to reach out to some of those smaller areas.”

Although the trip involved quite a bit of hard work, the Fairview team felt incredibly blessed by the relationships forged with the Orange Church of God congregation. 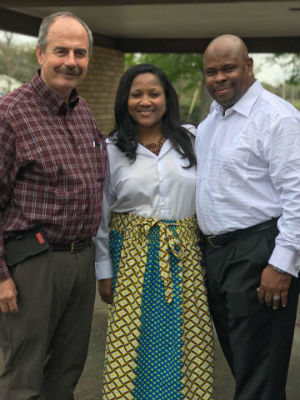 “We really had a great time,” said Pastor Milan. “We enjoyed the time we had, while working hard, too. They offered us wonderful hospitality, even serving us food. We stayed for the church service, as well. We want to continue building that relationship.”

Even while back in Alabama, that relationship continues to flourish. In fact, the Fairview Church of God is already planning another trip to Orange, Texas, and keeps in contact with Pastor Demo and his congregation.

Pastor Milan also hopes that they can continue extending help to Orange Church of God, which is still in need of more resources and funds, specifically for new gymnasium flooring.

“We have a full-sized gymnasium,” said Pastor Demo. “There’s no community rec center within thirty miles for children to exercise or play basketball.”

Before the gymnasium flooding, the gymnasium served as the home to a vibrant recreational ministry for children. Until the flooring can be restored—which will require funds beyond what the church can currently afford—no recreational center will exist for the surrounding counties to enjoy.

However, Orange Church of God has not lost its spirit and faith in the midst of destruction. In fact, the campus is planning to host a summer camp beginning June 1.

“This has not stopped us from doing ministry,” said Pastor Demo, “and we are so thankful for relationships made with Pastor Milan and others through this.”

In Texas, across North America, and around the world, God is on the move in the Church of God. Join the movement. Reach our world. Donate today at give.jesusisthesubject.org.