By chogministries
Posted March 4, 2015
In All Church of God
Freedom Sunday: CHOG Takes Stand for Freedom2015-03-042015-03-04https://www.jesusisthesubject.org/wp-content/uploads/2016/07/ChogLogo-Light.svgChurch of God Ministrieshttps://www.jesusisthesubject.org/wp-content/uploads/2016/07/ChogLogo-Light.svg200px200px 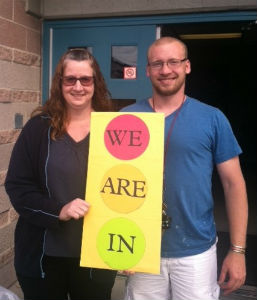 Photo: “We are in!” declares Acacia Hills Church (Tucson, Arizona).

Isaiah prophesied it. Jesus underscored it. Now the Church of God is living it out. When freedom for the captives is proclaimed, bonds begin to break, chains start to crumble, and prison doors swing open wide. On Sunday, February 22, 2015, the Church of God came together to shine the spotlight on the global atrocity of human trafficking. In church after church, God’s people committed to prayerfully and financially support ministries of the Church of God that deal directly with the issue. As usual, the Holy Spirit moved in some unexpected and unanticipated ways.

“On the day we took our offering, there was a new couple in church for the first time, with five grandchildren,” H.E. Paul Flores, pastor of First Church of God (Wauseon, Ohio) explains. “The man and his wife are recovering alcoholics, and were saved just a few weeks earlier. This was their first time to attend church since childhood. The woman was deeply moved because she has spent time in shelters, and has seen the ugly side of life in Toledo…Both were overwhelmed with the love of our people and the idea that Christians would care enough to give to a cause like this—to help people they’ve never met.”

Taking up a one-time offering wasn’t enough for Church at the Crossing (Indianapolis, Indiana). In the church newsletter, Nabil Safi, pastor of missions, writes, “Church at the Crossing, you said Yes loud and clear when fifty-five women and men signed up to take next steps. We are looking for ways to further our conversations and to engage at deeper and deeper levels in this biblical cause and mandate.”

Known for their faithful and generous support of mission work around the world, Highland Park Community Church (Casper, Wyoming) is no stranger to the fight for societal transformation. As a part of their new teaching series, “Hope in Action: Taking Christ to the World,” Highland Park invited Jim Lyon to come and share how the Church of God is proclaiming freedom for the captives by making Jesus the subject. Later via Twitter, Jim shared two incredible anecdotes of God’s providence at work on Freedom Sunday. Though the CHOG TraffickLight offering had already been collected, following Highland Park’s service, one church member handed Jim another check. She said, “I gave at the beginning of the hour. Now I have to give more.” Then after church, in the lobby of the hotel where Jim was staying, a young man greeted him, saying that he was “moved” by Jim’s teaching. The young man added, “I was trafficked as a teen until three years ago. Now I’m free.” What a blessing it is for this young man to watch and see how the Church of God is now working to bring freedom to so many more.

Sometimes it only takes one person to start something big. First Church of God (Ontario, Ohio) knows this firsthand. “It was a snowy day, and many churches were canceling services,” Pastor Jeff Gray explains. “So with a very small group of fifty or fewer, we had Freedom Sunday, and raised $1,425. The offering was not planned; we just did it at the close of the service after a spontaneous suggestion. One teenage girl, just fifteen, pledged to match everyone’s gift up to $500. She gave $500 herself. Because of her gift, others gave.”

Other spontaneous offerings brought in thousands of dollars when congregations were moved by last-minute promptings of the Spirit. Rustic Hills Community Church (Sioux Falls, South Dakota) brought in $1,182, in spite of the impromptu nature of their offering. The Fairview Church (Seattle, Washington) took up a last-minute offering and raised $1,350. 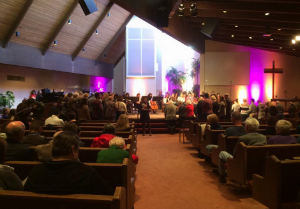 Creativity was on display in Alma, Michigan, where one hundred stoplight figurines were sold to remind First Church to pray against trafficking while stopped on the road at every red light. In total, they raised $1,350 for CHOG TraffickLight.

Eleven baptisms and an inspiring video capped off a morning of focused prayer and commitment to faith-in-action at Meadow Park Church of God (Columbus, Ohio). In Ohio, Donna Cox of OneHeart Dayton shared personal stories with Salem Church, detailing the power of the gospel to help eighty strippers “hang up their heels” and find employment. Then, in an unprecedented offering, $3,781 was counted for CHOG TraffickLight.

Meridian Church of God (Indianapolis, Indiana) invited a representative from Stripped Love to share about some of the work that is being done to fight against trafficking. For Meridian Church, Freedom Sunday represented an opportunity to participate in something much bigger than themselves—an opportunity the church has been longing for. “I think a congregation can get very caught up in what’s going on locally,” Maggie Hills, member of Meridian, explains. “But we as Christians need to connect to make a difference around the world. We’ve been wanting to get involved with the Church of God nationally, and this was something that came up.” Meridian Church of God looks forward to more opportunities to get involved with the larger work of the movement.

“In more than thirty-five years of ministry in the Church of God, I cannot recall a groundswell of positive participation akin to what we’ve experienced with Freedom Sunday,” Bob Moss, chief advancement officer at Church of God Ministries, explains. “Clearly the Lord has moved the heart of his church to address the travesty of human trafficking. This feels like a revival of purpose in our midst.”

Much has been accomplished, but the work is not done. Fund the fight for freedom at www.CHOGTraffickLight.org.