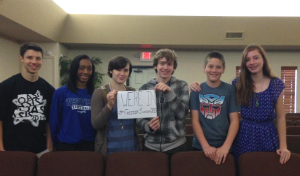 Photo: Youth at West Side Church of God (Glendale, Arizona) say, “We’re In!” via Twitter.

God is up to something big. And he’s using his people to get the job done. As evidenced by a flurry of social media activity categorized by the Freedom Sunday hashtag (#FreedomSunday2015), this weekend’s blitz against the scourge of human trafficking made a definite impact. Early reports indicate that the Holy Spirit was active and powerful as Church of God congregations across the country rallied efforts to raise both awareness and funds in the fight for freedom.

In Alma, Michigan, one hundred stoplight figurines were sold to remind First Church to pray against trafficking while stopped on the road at every red light. In total, $1,350 was raised for CHOG TraffickLight.

In Seattle, Washington, believers heard the prompting of the Holy Spirit to take up an unplanned offering for Freedom Sunday. As a result of the generosity of The Fairview Church of God, $1,600 came in to support release for the captives.

In Kokomo, Indiana, worshipers at First Church of God were blessed to hear from Carolyn Knight, a Bible professor who leads the nationwide ministry to strip clubs known as Light in Darkness. Moved by the outstanding work Christians are doing across the denominational spectrum, First Church boldly declares, “We R in!”

Eleven baptisms and an inspiring video capped off a morning of focused prayer and commitment to faith-in-action at Meadow Park Church of God in Columbus, Ohio. At West Side Church of God in Glendale, Arizona, the youth are eagerly taking up the fight against sex trafficking. Like numerous other churches and individuals, they posted a photo of themselves proudly displaying a “We’re in!” sign. In Ohio, Donna Cox of OneHeart Dayton shared personal stories with Salem Church, detailing the power of the gospel to help eighty strippers “hang up their heels” and find employment. Mark Krenz, pastor of McDowell Mountain Community Church in Scottsdale, Arizona, sums up the significance of Freedom Sunday. Simply put, he says, “Jesus’ mission was to bring freedom to those living in captivity. And as his church, that is our mission, also!”

Known for their faithful and generous support of mission work around the world, Highland Park Community Church in Casper, Wyoming, is no stranger to the fight for societal transformation. As a part of their new teaching series, “Hope in Action: Taking Christ to the World,” Highland Park invited Jim Lyon to come and share how the Church of God is proclaiming freedom for the captives by making Jesus the subject. Later via Twitter, Jim shared two incredible anecdotes of God’s providence at work on Freedom Sunday. Though the CHOG TraffickLight offering had already been collected, following Highland Park’s service, one church member handed Jim another check. She said, “I gave at the beginning of the hour. Now I have to give more.” Then after church, in the lobby of the hotel where Jim was staying, a young man greeted him, saying that he was “moved” by Jim’s teaching. The young man added, “I was trafficked as a teen until three years ago. Now I’m free.” What a blessing it is for this young man to watch and see how the Church of God is now working to bring freedom to countless others.

May the prison bars continue to fly open.

Do you have an experience from Freedom Sunday to share? Send us your story, photo, or other multimedia to chognews@chog.org, or use #FreedomSunday2015 on Facebook and Twitter. Still want to play a part in proclaiming freedom for the captives? It’s not too late. Fund the fight against human trafficking at www.CHOGTraffickLight.org.