We’re engaged in a battle of historic proportions. The Church of God has once again gone to the front lines of a war against sexual exploitation and human trafficking initially waged more than a hundred years ago. With the launch of Trafficklight in 2014 came a renewed fervor for seeing what Jesus sees, living out Jesus’ example in our neighborhoods, and allowing our hearts to be broken for what breaks his. Together we’ve raised awareness, funded life-changing projects, and touched the lives of trafficking victims through several ministries already in the trenches. Freedom Sunday 2017 offered a preview of what’s to come as we turn our attention to the supply side of human trafficking.

Hundreds of Church of God congregations took a stand once again for freedom on Sunday, March 5. Through a video sent to churches before Freedom Sunday, Jim Lyon joined Steve Arterburn to introduce the new direction the movement is taking to attack the root of the problem. Offerings were collected to kick-start Trafficklight 2.0, prayers were offered for Trafficklight partners, documentaries about human trafficking were shown, special guests testified to the work God is doing in local communities, and sermons addressed the connection between pornography and trafficking.

Riverbend Church of God in Saskatoon, Saskatchewan, is just one example. They featured a special guest from a new ministry in Canada started to restore trafficking victims. Nancy Klebaum reported their church’s Freedom Sunday story on behalf of the congregation, and said, “I am so excited to be a part of a tribe that, since its beginnings over a hundred years ago, has worked for social justice and the fight to end oppression.”

Patterson Avenue Church of God in Ulysses, Kansas, is a congregation of fewer than twenty, but that didn’t stop them from making a big impact on Freedom Sunday. The church has been supporting Trafficklight since their pastor heard about it at the Church of God Convention in 2014. Members have been encouraged to substitute their coffee money for the cause, and even sell hand-crafted items to make the $1,000 goal each year.

The Point Community Community Church in Saltsburg, Pennsylvania, participated in Freedom Sunday this year for the first time. They look forward to participating again and increasing their support. Jones Chapel Church of God in Meridian, Mississippi, not only showed videos from each of the Trafficklight partners leading up to Freedom Sunday, but also featured a moving video produced by the Christian band Tenth Avenue North, called “For Those Who Can’t Speak.” The film Priceless, produced by the Christian band known as For King and Country, was shown at the Church of God congregation in Prestonsburg, Kentucky.

These congregations weren’t alone. Many featured similar special video presentation and incorporated drama in to their Freedom Sunday service. From guest speakers to challenging sermons to collecting generous offerings, Church of God congregations like these, and many more, took a stand for freedom on Freedom Sunday 2017. Many will also continue to take a stand as they send their pastor or representative to the Freedom Summit.

The Freedom Summit, which will convene immediately after the close of CHOG Convention 2017 in Wichita on June 23, officially kicks off Trafficklight 2.0. Beginning at 1:00 PM, hear updates from ongoing and new Trafficklight partners. Be inspired by fellow Church of God congregations. Find out about new resources coming soon. Then join us for dinner and a tour of Hope Ranch for Women. Learn more at www.chogtrafficklight.org. The fight for freedom continues. 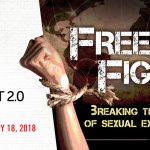