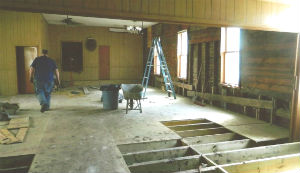 It may be your church board’s worst nightmare. Just when you least expect it, just when the finances can’t handle any more pressure, the bottom falls out. Often it’s a problem with the church building or property that needs attention, and such was the case for Lighthouse Community Church of God in Neodesha, Kansas, earlier this year. One problem appeared to lead to the next, until God made it clear that he is still in control. The very structural headaches that seemed only to worsen were actually blessings in disguise.

“Within six months, we may have had someone fall through the floor,” Pastor Leslie “Les” Griffith explains. The church had known that some of the floor needed some repair, but they couldn’t have guessed how extensive that repair would have to be. The church building, built in the 1890s, still had its original floor joists. The problem: at least seven of those joists were broken, and the others were on the verge of collapse. Though the church had intended to only remove a portion of the floor, they ended up having to remove the floor throughout the rest of the sanctuary, including the platform. 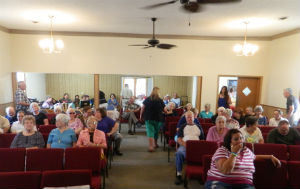 Contractors know all too well the kind of surprises lurking under every floor board and behind every wall. In order to make sure the joists were placed in good, solid wood, the plaster on the wall had to be taken down. Unfortunately, the thick plaster, the paneling, and the red pine lumber on the walls had to be removed on both sides. The church decided to take the opportunity to replace the wall up to the ceiling. To make matters worse, the construction on the walls caused part of the ceiling to come crashing down! What a mess it was! And the bills kept piling up…

It didn’t look good, but the church pressed on. Instead of dwelling on the setbacks, the church took this season of change as an opportunity for growth. “We just told the contractor we wanted the building to be in good, solid shape, and to look nice,” Les recounts. “We’d run into a setback and say, ‘Okay, we’ll take care of it.’ And our congregation was not about to quit. We came out stronger. There’s more support, more people excited about what’s going on than there ever was before.”

During the construction, the congregation met for worship at a food pantry where the pastor’s wife serves as director. The church now celebrates a new floor, new chairs, new walls, a new ceiling, and a new platform. Then, just as the church was finalizing a loan, they received a call from the owner of a nearly dilapidated house on the property adjacent to the church. The home had been abandoned and was sitting empty for seven years. Previous negotiations from the church to purchase the home so the church’s tiny parking lot could be expanded had failed. The owner would not budge from his $7,000 asking price. That day, he accepted $2,000!

“In our area,” Les explains, “people drive everywhere. We need parking. We need room to grow. The sanctuary can handle it, but our parking lot could not.” Not only was the church spruced up and ready to welcome new guests, but now they were also in a position to expand the parking lot. The next challenge was to determine how to pay for the building demolition.

“We were sitting in a meeting, talking about how to pay for getting the house torn down and prepare the property for a parking lot,” Les remembers. “During the meeting, our local fire chief walked in and said he was sorry to interrupt, but he wanted to talk about the old house next door.” The fire department was in need of an old house they could use for a search-and-rescue training operation. In conjunction with Homeland Security, they would foot a portion of the bill for demolition!

“Most interesting through all of this was that our attendance didn’t drop,” Leslie explains. “At times it even spiked. I am in awe of the strength of the people of how all of this bonded us together in a way that we haven’t been bonded before.” May the light of Christ shine ever brighter at Lighthouse Community Church of God!