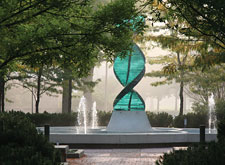 For the second consecutive year, Forbes has named Anderson University one of America’s Top Colleges.

Forbes included 650 undergraduate institutions nationwide in the 2012 rankings, which were prepared by the Center for College Affordability and Productivity.

“We are grateful to be included in this recognition as a truly distinctive quality university, so highly valued by our students and graduates,” said Anderson University President Dr. James L. Edwards. “The basis for this recognition encourages us in our commitment to center our educational mission in enduring values sustained by the exceptional work of our faculty and staff. The nation and region needs us and schools like us at our best, and we are committed to live within this vision of excellence.”

Forbes editor Michael Noer explained the ranking process in an article on Forbes.com.

“The rankings, which are compiled exclusively for Forbes by the Washington, D.C.-based Center for College Affordability and Productivity, focus on the things that matter the most to students: quality of teaching, great career prospects, high graduation rates, and low-levels of debt,” said Noer.

The rankings are based on five general categories: post graduate success (32.5%), student satisfaction (27.5%), debt (17.5%), four-year graduation rate (11.25%), and competitive awards (11.25%). A complete ranking methodology may be viewed at http://centerforcollegeaffordability.org/uploads/2012_Methodology.pdf.

Data collected by Forbes is corroborated by data from the Student Satisfaction Inventory and the National Survey of Student Engagement. Data from the SSI, for example, shows that students rank Anderson University above the mean on a large battery of questions ranging from classroom instruction to campus safety.