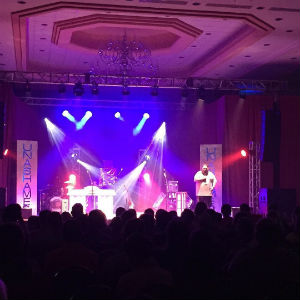 When it comes to wrestling the great injustices of the world, students are often those first in the ring. Longing to authentically combat problems with more than just talk, their generosity and willingness to serve cannot be understated. Looking ahead to Freedom Sunday 2016, leaders of the state youth convention in Florida took things in a different direction. Believing in the potential impact of our students on the rest of the faith community, they issued a fundraising challenge too good to pass up.

Every year, the youth convention in Florida takes up an offering to support a designated cause. The offering always goes to support a tremendous need, but is a one-time event. Departing from the norm, convention leaders decided to do something bold—certainly not without risk. Instead of reaching into their wallets right then and there, students and their youth ministry leaders were charged to go back to their churches to support the 1,000 X $1,000 CHOG TraffickLight goal by Freedom Sunday 2016. Believing in the power of God and the inspirational influence of students, each of the more than twenty youth groups could bring in $20,000 for the cause of freedom around the world.

“One of the things that has always surprised me about students is that when they are presented with a worthwhile cause, they are extremely generous!” exclaims Josh Boldman. Josh, student ministries pastor at White Chapel Church of God in South Daytona, Florida, also contributes his time and talent to the state youth convention. His experience told him that students can set the example for the rest of us. Tapping into the unlocked generosity of students, he continues, “Unfortunately, I think this is a fact that is often overlooked and, a lot of times, students are given a pass when it comes to obeying Christ’s call to care for the widows and orphans of the world. What we are hoping is that students will realize that learning and worship must meet action in their day-to-day lives. When it comes to big conventions, it’s really easy to dissociate those teachings from everyday life, but when the challenge involves going home and making a difference, those teachings become more real. That’s what we’re going for.”

This year’s convention theme was “Unashamed”—a theme which echoed the movement-wide emphasis on being bold for Christ. It was a bold move for youth convention leadership to give up the certainty of an onsite offering for the prospect of students raising more money after the convention’s conclusion. But the convention offering always corresponded to the convention’s theme, and the speaker, Cody Bracy, of McDowell Mountain Community Church in Scottsdale, Arizona, is a strong advocate for trafficking awareness. He and his wife Kristen desperately want to see an end to such a global injustice. “When we realized that TraffickLight was asking for 1,000 churches to contribute $1,000 each toward this goal,” Josh recalls, “we knew that we had found a perfect fit.”

Don’t let your passion for CHOG TraffickLight fade as the newness wears off. Josh’s heart for this issue offers important insights that remind us we’re still in the heat of the battle. “Sadly our culture has allowed us to live as if slavery is something that only happened in the past, while the truth is that, though slavery in our country was abolished many years ago, it has simply taken a different form,” Josh explains. “One of my favorite things about the Gospel of John is the image that Jesus came to shed light on that which was previously content to hide in the darkness. That’s what I feel like we are trying to accomplish by keeping the issue of human trafficking in the forefront of our ministries. We are trying to do what Jesus showed us is possible—to shed light on something that generally goes unnoticed and therefore unchanged.”