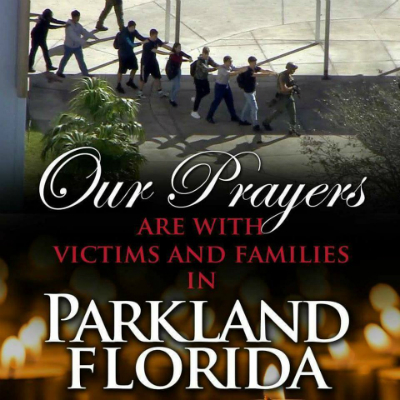 A graphic posted on the Coral Springs Church Facebook page.

The night before the devastating tragedy at Marjory Stoneman Douglas High School, Pastor Kimberly and her daughter Anna each had the same disturbing dream. At some point during the night, they both imagined being in the middle of a violent situation where they each had to use guns to defend themselves. They awoke and shared with each other just how terrifying their dreams were and how they hoped they’d never find themselves in such a situation. A few hours later, news broke about what had taken place a couple miles from their home. Kim’s husband, Anna’s father, is the lead pastor of Coral Springs Community Church of God, the closest Church of God to Parkland, Florida.

At 2 AM on February 15, Pastor David Konstantopoulos lay awake, unable to sleep due to the trauma of the previous day’s events in his community. He posted the following thoughts to the church’s Facebook page: “As I am praying, my heart is so heavy for the many lives that have been forever altered. For many, it may seem that evil has won. We believe, however, that the power of God, found in the name of Jesus, can bring the ultimate and final victory.”

Emotions were raw, the pain was fresh. Thankfully, none of the youth group at Coral Springs Community Church were at the school that day. The city of Coral Springs has four high schools; the current students aren’t represented at Stoneman Douglas. “However, as you might expect, most of them—and us—are connected in some way to the school, as well as some of the victims,” David explains. One of the victims was a close friend of a Coral Springs student, having taken dance class together. Pastor David’s next-door neighbor is a junior at Stoneman Douglas and recounts the horrific ordeal, including hearing shots fired. Sadly, friends of David’s neighbor were among those who were killed, including Coach Aaron Feis. The tragedy also hit close to home for the church’s day school, which cares for seventy children. The daughter of the coach whose life was claimed that tragic day is one of the day school’s former students.

Though Coral Springs Community Church isn’t within Parkland’s city limits, it’s only a few miles away. As you can imagine, the scene that unfolded on February 14 was marked by chaos and panic. “When we were trying to return home,” David recounts, “the scene was unbelievable. Emergency response and police vehicles were everywhere, helicopters were in the sky, and there were hundreds of cars with parents trying to get to the school. Traffic was blocked so badly that it took thirty-five minutes to drive just a couple miles.

Prayer is one of Coral Springs Community Church’s core values. Every month, they hold a Sunday night prayer gathering to specifically bring the needs of their church and community to a loving heavenly Father. Their first response to the tragedy in Parkland was to schedule a candlelight prayer vigil. On Friday night, the scene was solemn, tears were shed, and cries could be heard. David explains that they wanted to “give an opportunity for day school families and church families to come together to grieve, find strength in each other, and surrender pain, fear, and questions to Christ.” In addition to scripture reading and music, candles were lit for each victim. David’s son played a song he wrote during a particularly difficult season their family had to endure a couple years ago. The words of the chorus resonated with those in attendance:

Following the song, as each victim’s name was read aloud, someone from either the congregation or the day school came forward with a white carnation to lay next to each candle. Pastor David also shared his testimony of his experience with fear and pain in that difficult season his family endured where he and his wife nearly died, causing their world to come crashing down all around them. “I was very open and shared that I knew what it felt like to want to give up,” David recalls. “But in those moments, we must keep the faith. Even when it doesn’t make sense, even when we don’t have the answers, even in the midst of our deepest grief, we keep the faith. And while we do so, we cry out to God. When we don’t know what to say, we can cry out in pain and the Holy Spirit will make intercession for us.” 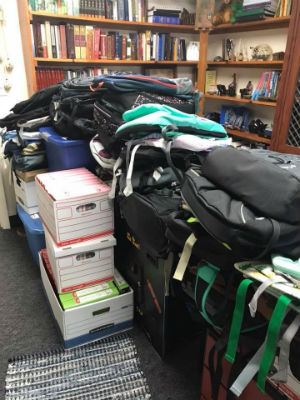 Backpacks, other school supplies at the church office.

Sunday night, the church met again for their regularly scheduled prayer meeting. “We spent a couple of hours sharing our stories, hurts, questions, and pain regarding the shooting that had taken place,” David explains. “Then we spent a considerable amount of time talking about how God, in his infinite mercy and grace, can take what was intended for evil, and use it for good. That is specifically what we prayed for, in addition to remembering our community and those families that lost a love one.”

For Coral Springs Community Church, prayer is the priority. But it’s also only the first step. In the past seven months since David Konstantopoulos became their lead pastor, the church has grown by nearly 80 percent. More and more, they’re actively seeking ways to make a tangible difference in the community. So, when Christine Smalley, a layperson in the church, approached David with a plan to collect supplies for Douglas Stoneman High School, it was met with great enthusiasm. Pastor David explains that, in the commotion of the students, faculty, and staff fleeing for their lives, backpacks, books, and other school supplies were destroyed, lost, or in some way mixed up in the crime scene. With donations from the church and community, including a local office supply store, Coral Springs Community Church has become a drop-off location for a tangible expression of love for the students and teachers. Additionally, the church is assembling care packages for the first-responders who went to the high school that day, and they’ve scheduled a blood donation event with the Red Cross. 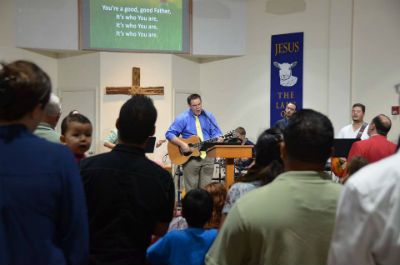 “As you pray,” Pastor David asks, “remember that we are not wrestling or fighting against flesh and blood, but against spiritual forces. Pray that our movement doesn’t forget that when evil presents itself in such an overt way, it is a spiritual battle. Seeking solutions that are physical and temporal, without including the spiritual aspect involved, will serve as Band-Aids at best. When I began at Coral Springs Community Church, the vision my wife and I developed for the church was this: ‘Living life and finding faith together.’ In other words, we share life—the good, the bad, and the ugly, even when it doesn’t make sense. We do all of this together. Please pray for continued faith and unity as we seek to fulfill God’s call for our church in our community.”