Eyes on the Prize: A Missionary’s Experience at the Tokyo Olympics

Originally scheduled for the summer of 2020, the Games of the XXXII Olympiad instead commenced a year later. The COVID-19 pandemic cast a long shadow of doubt over whether the Olympics would even take place in 2021, complicating matters for the city of Tokyo, the Olympic committee, and athletes everywhere. In an unexpected series of events, however, these difficulties and delays ultimately opened doors of opportunity for one missionary to serve others while experiencing the Tokyo Olympics firsthand.

About three years ago, Mike Wagner first heard about the possibility of applying to volunteer for the Olympics. The special assignment missionary for Global Strategy has called Japan home for three decades and believed God had given him something valuable to offer the iconic international tradition. Mike considered it a once-in-a-lifetime opportunity; he applied, ensured the necessary time off, and then the pandemic brought the world to a screeching halt. 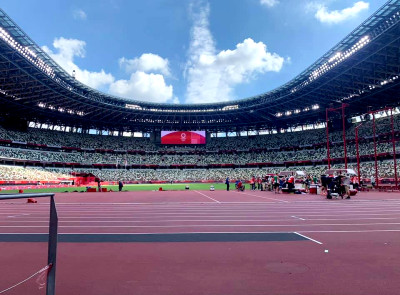 Mike recounts the uncertainty over this year’s Olympics lingering into the new year, even up to a hundred days prior to the opening ceremonies. His application had been accepted, though, so when word came that the pandemic would not force the cancellation of the games, Mike Wagner was given the green light. Assigned to serve among the event staff, he would handle matters related to the multitudes of spectators expected to fill the stands and cheer on the numerous world-class athletes going for the gold. Sadly, a summer surge of COVID cases meant disappointment for hopeful spectators. Due to Mike’s language skills, however, it would not spell the end of his journey to the Olympics.

When organizers learned Mike Wagner was a native English speaker, they recognized having him around could prove very beneficial. They weren’t wrong.

“I was also blessed to attend the closing ceremony, even though I wasn’t scheduled,” Mike explains. “Because [the organizers] saw my potential, they made a place for me. An interesting thing that happened was I was still involved in seating of the photographers, and part of our section was right above the VIP section—which included the Emperor of Japan and the IOC chairman. At one point the security force for the Emperor came over and was trying to communicate to the person in charge from the Olympic staff, and was failing terribly. I was able to step in quickly and translate, smoothing over an exchange that was getting a little heated.”

Of course, a moment like that will live on in Mike’s mind, but such high-profile interactions weren’t the sum of his service at the summer Olympics in Tokyo, Japan. Mundane moments like pointing people to the restrooms were interspersed among special privileges like standing in for athletes at the rehearsal for the opening ceremony. Though he began serving in various ways under close supervision, as the days passed Mike would earn the respect and trust of his superiors and be offered more responsibility. Ultimately, he secured a role directly under the chief photographer for the Olympics. Throughout the experience, Mike saw and encountered recognized athletes from across the globe. 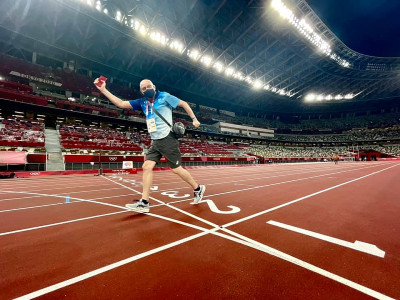 Mike poses as a runner crossing the finish line at Olympic Stadium.

“Many coaches and fellow athletes were in the stands behind me, and it was usually right next to me that the winners would come and grab their national flag,” Mike recalls. “During the women’s 400m final, things got interesting. After her world-record win, Shaunae Miller-Ubio [Bahamas] came over right in front of me to grab her flag and fell to her knees, staying there in tears of joy and receiving encouragement from her coach and fellow athletes. Then that was when the silver medalist Marileidy Paulino [Dominican Republic] came over to get her flag, and before the taking the flag her friends handed her a Bible.”

Serving guests from all over the world, however and whenever he was needed, was something missionary Mike Wagner will never forget. The Lord allowed him to experience that which most will never experience. For this, he is ever grateful.

“I think I realized a couple of things,” Mike concludes. “First, no matter how small your task, it is important, and you will be recognized for your efforts. Second, don’t give up on pursuing a dream. It may not turn out exactly how you planned, but it can turn into something bigger than you dreamed.” 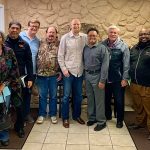 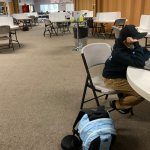