By chogministries
Posted November 6, 2019
In All Church of God, Central, Give Life
English + Spanish + Arabic = 3 Congregations Under 1 Roof2019-11-062019-11-06https://www.jesusisthesubject.org/wp-content/uploads/2016/07/ChogLogo-Light.svgChurch of God Ministrieshttps://www.jesusisthesubject.org/wp-content/uploads/2016/07/ChogLogo-Light.svg200px200px 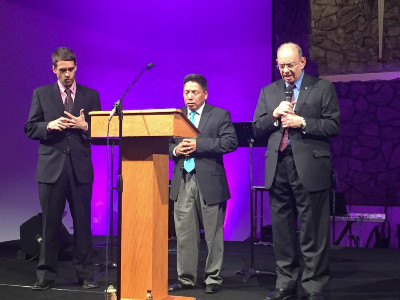 While race, language, culture, and politics are just a few of the things that often keep people apart, at 14400 Northwest Freeway just off US Highway 290 in Houston, Texas, Jesus Christ brings people together under one roof. Houston First Church of God, Houston Primera Iglesia de Dios, and Arabic Christian Church offer weekly ministries separately in English, Spanish, and Arabic, but each of these Church of God congregations come together for different purposes throughout the year. One recent example of such unity took place in early October when the three churches gathered at the table for their annual “International Feast.”

Tim Gould, who’s served on the Ministries Council for the past two years, has also served as lead pastor of Houston First Church of God since 2015. Warning: his description of this grand occasion could lead to severe cravings: “The International Feast is the most amazing church potluck that has ever happened.”

There you have it. But even while the tantalizing spread reflects the delicious diversity among the three groups, it’s not the food that captures Pastor Tim’s focus. The special day in October, which generally begins with a joint worship service in three languages, also includes fervent prayer and enriching cross-cultural fellowship. Huber Maxwell, pastor of the Spanish-speaking congregation, echoes Tim’s sentiment.

“The International Feast is a great opportunity,” Pastor Huber Maxwell explains, “for everyone to realize that there are others who enjoy praising God as much as we do, with the only difference being that they do it in a different language.”

Tim Gould’s predecessor, Don Bergstrom, who now serves as regional pastor in Wyoming, remembers fondly when the Holy Spirit orchestrated the beginnings of the triad of congregations about twelve years ago. Reviewing the results of a community survey, Houston First Church realized the primary language of a high percentage of their neighbors is Spanish. It was clear that a Spanish work was needed, and the church welcomed Pastor Huber Maxwell from El Salvador to their campus. A master calendar was created to help prevent confusion and to keep the two congregations’ calendars straight. “Though there were probably a few misunderstandings in the beginning,” Don recalls, “we all believed this was God’s idea. So, we prayerfully and honestly worked through those minor issues and a wonderful partnership was born.” 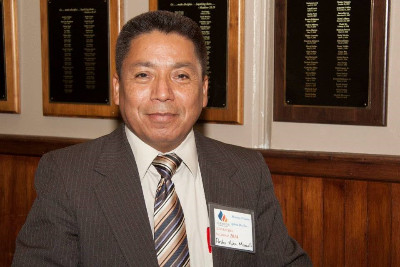 Following complications from a hurricane that led to the closure of one of the church’s ministries, the door of opportunity opened to another. “Pastor Soliman had come to the United States from Egypt, seeking treatment for his wife’s cancer,” Don explains. “But the Holy Spirit had also put it on his heart to stay and plant an Arabic-speaking church in Houston…thus, three Church of God congregations worshiping under one roof. Hallelujah!” The pastor of Arabic Christian Church also rejoices.

Since 1967, Mounuir Soliman had served as a pastor in the Church of God. For twenty-five years, he presided as president of the Egyptian General Assembly of the Church of God. “I would like to thank Houston First Church of God for their love and cooperation,” he reflects. “They opened not only their building, but also their hearts, to our congregation.” 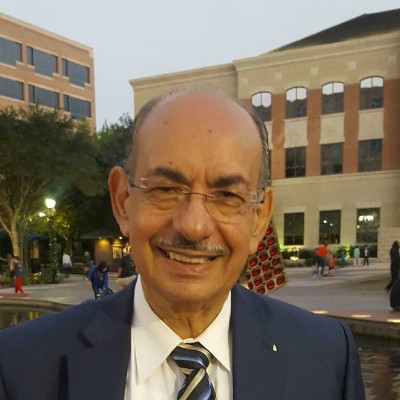 Only a couple years ago, in a move that reflected both cooperation and stewardship, Houston First Church and Arabic Christian Church merged their children’s ministries. Sarah Mathewes, Houston First Church children’s pastor, reflects, “We have enjoyed having our children’s ministries combined,” Sarah explains. “The children benefit from learning about one another’s cultures, and the teachers benefit from having a week off every other week, allowing them to participate in the worship service.”

Scheduling works well for the unique combination, as Houston First Church worship services begin at 10:45 and last until noon, while Arabic Christian Church’s services take place in the east wing of the building from 11:00 until about 12:30. Primera Iglesia de Dios gathers for worship at 4:00 in the afternoon, and various ministries take place at different times during the week, all run with intentional strides toward clear communication.

God opened the doors for yet another partnership when Houston First Church faced vacancies last year for worship pastor and youth pastor. David Rivera, who leads worship and youth for the Spanish-speaking church, was recruited to help Houston First Church find the right replacements. In the search process, it quickly became apparent to Pastor Tim that David was the one for both jobs. “This gave him the opportunity to step away from the forty-hour work week outside the church and instead work full-time for Houston First Church,” Tim explains. “Not only does he still hold leadership with Iglesia, but also his role was formalized by the Spanish-speaking church as they recognized him as an associate pastor alongside his father as the lead pastor.” 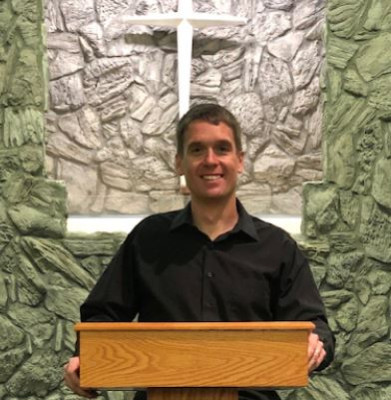 The three congregations get together for various activities throughout the year. Youth activities and game nights attract attendance from all three congregations. Two of the congregations have partnered to host a combined VBS. Bilingual worshipers regularly attend more than one service. The children of Primera Iglesia de Dios and Arabic Christian Church, who usually speak English, are frequently involved in the Houston First Church worship service. In everything, Pastor Tim is most encouraged by the opportunities to be the hands and feet of Jesus together in their community. What a powerful witness that Jesus is the subject! Tim cites the circumstances that unfolded post-Hurricane Harvey a couple years ago.

“All three congregations came together for a supply drive, for which we were able to use all three languages to our advantage,” he explains. “We were able to go out into the neighborhoods to deliver supplies and literally knock on doors to ask them if there was anything they needed. When we came to a Spanish-speaking home, for example, we spoke the language! And, we were able to quickly refer them to each other’s churches, knowing we could trust each other and that each one would minister wonderfully to these individuals. As we’re ministering to people, they may not end up being a part of Houston First Church due to the language they speak, but our goal is to see them be a part of the kingdom. Three congregations under one roof really help make this possible!”

In Texas, across North America, and around the world, the Church of God is taking back what hell has stolen. Join the movement. Give life. Donate today at www.jesusisthesubject.org/give.