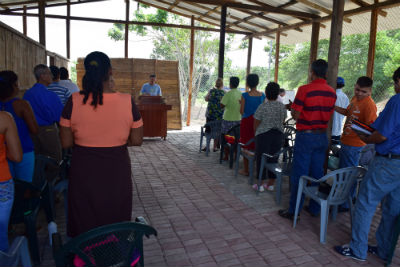 Photo: The Tonsupa church worship under a temporary structure.

By Jon and Karen Lambert

On Saturday, April 16, 2016, a 7.8-magnitude earthquake hit us here in Ecuador. The quake lasted 49 seconds. The weeks that followed seem like a dream—a bad dream. The death toll for the first weeks steadily rose to 655, and then the government decided not to share the final totals, so the actual death toll may never be known. We know 17,638 people were treated for injuries, and 25,091 were housed in temporary shelters. Cities and towns at the epicenter are 70- to 90-percent destroyed. The United Nations estimates that 350,000 people in Ecuador will need some type of assistance due to damage or loss of income. It is a blessing that none of our church family were killed or seriously injured in the quake. The mental anguish we still see on faces in the devastation zone is heartbreaking. Parents who searched for children buried under debris and small children who didn’t understand why “Mami” and “Papi” never came home have accepted the sad truth that their loved ones are gone. Cities along the coast from Manta to Tonsupa were without water and electricity for over a month. Some rural areas are still without basic services. Three of our congregations and one house church are in the areas heavily affected by the 7.8 earthquake and the severe aftershocks that continue to this day—nearly three months later.

The Tonsupa church building is a complete loss. All interior walls had fallen, and in the front of the church, a gaping crevice has opened up diagonally, splitting the sanctuary into two halves. They will not be able to rebuild a permanent building on that site. There is a fault line running under the church property and the ground continues to separate more each day. The Tonsupa congregation is now meeting in a temporary structure built partially with materials salvaged from the church building. The plans are to use the temporary structure on the existing property while another site is found to relocate the church facilities. Pastor Delia’s house was also damaged. Several concrete support pillars have collapsed and must be replaced. Pastor Delia would not discuss the damage to her home because she said, “The church needs are more important than mine.”

As areas closer to the epicenter opened to the public, Pastor Delia and her adopted daughter, Susana, went to Pedernales, the hardest-hit city. There they brought food, water, and school shoes from the “Happy Feet” program to orphans living on the beach. There were about a hundred homeless children who gathered to hear the gospel message.

The Quevedo church was slightly damaged, and some homes of those in the congregation were damaged. In talking with the pastor’s wife, we learned that four of her work associates were killed in the quake.

The Piedra Fina house church and pavilion behind are made of wood and bamboo, which can sway in earthquakes without falling. There was only minor damage to the homes in that area.

The Concordia church building had two badly cracked walls, which had to be repaired, and six support columns which need to be added to stabilize the structure. At the end of May, twin tremors—a 6.2 and a 6.4—hit the area, bringing down the interior walls of the church. The congregation’s leader Gloria Solano is a paraplegic confined to a wheelchair. Gloria was the first convert in the church and began a Sunday school from a small window in front of her home. She could prop herself up enough to lean out the window and teach the children about Jesus. 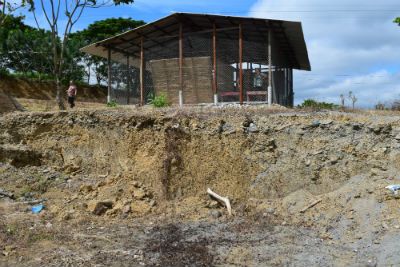 Photo: Sinking land caused by the earthquake at the site of the old Tonsupa building.

Gloria’s house partially collapsed during the quake and subsequent aftershocks. Her house has been condemned and must be torn down. Gloria is unharmed physically and is now living in the church building. A week after the quake, eight of us from Quito loaded a truck and our car and took food and water to Concordia. There we met Sister Delia, who came from Tonsupa to take some of the supplies back to Tonsupa and Piedra Fina. Most of the food we dispersed was provided by the Hands 4 Ecuador – Food Project.

We traveled to Tonsupa last weekend (July 9–11, 2016). We visited the new temporary structure built by the Tonsupa church. The original building’s foundation has now dropped over two meters and continues to slide toward the ocean. Sunday night after the service, we returned to our hotel for the night. At 9:00 PM, a strong tremor of 5.9 drove us outside, where plaster and bits of cement were raining down. Eleven minutes later, a 6.4 tremor hit, almost knocking us off our feet, bringing down more plaster and parts of walls. And then the entire city lost electricity. We spent the next few hours in the dark by the pool that had been partially emptied by the seismic waves, wondering if a tsunami was coming.

The crisis that started with falling oil prices, which have fallen to less than half of what Ecuador’s fiscal budget requires, along with the earthquake in April, has thrown Ecuador’s oil-dependent economy into a tailspin. As government programs were scaled back, the number of jobs decreased. Now in the aftermath of the earthquake, the economy has weakened even further as tourists cancel trips and jobs disappear.

The Ecuadorian church is receiving help from the Disaster Relief Fund of Church of God Ministries. We appreciate all of those who are supporting this fund that reaches all over the world to make a difference. Here we are trying to rebuild and restore our churches in the provinces of Santo Domingo and Esmeraldas. Funds to help those affected by the earthquake can be sent to the Disaster Relief Fund (Project # 45.04502) or given online at www.jesusisthesubject.org/disaster-relief/. Reconstruction funds can also be sent to Anderson through the project fund: Church Planting and Construction – Ecuador 42.40190.