By chogministries
Posted October 10, 2014
In All Church of God, Global Strategy
Ebola Outbreak: Update from CHOG in West Africa2014-10-102014-10-10https://www.jesusisthesubject.org/wp-content/uploads/2016/07/ChogLogo-Light.svgChurch of God Ministrieshttps://www.jesusisthesubject.org/wp-content/uploads/2016/07/ChogLogo-Light.svg200px200px 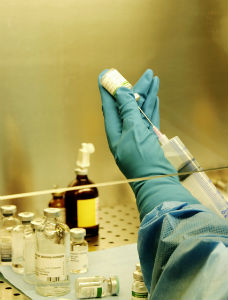 Photo: Breakthroughs on the Ebola virus continue to elude the medical community and scientific researchers. (stock)

Ebola. The term conjures up images of officials and medical personnel in hazmat suits, stirs up anxiety over news reports of recent fatalities, and triggers fear of the unknown. The world watches anxiously as the virus expands its reach. Though sustained by divine hope, Church of God people are certainly not immune from these concerns. Larry and LeAnn Sellers, missionaries to Côte d’Ivoire, offer an update on the impact of Ebola on the church and community in West Africa.

Ebola has not crossed the border into Côte d’Ivoire, but it has spread widely in neighboring countries of Guinea and Liberia, as well as nearby Sierra Leone. In Yamoussoukro, where the Sellers live, government officials have set up quarantine stations and required school children to disinfect hands before and after classes. Television ads emphasizing prevention regularly inform the public of important safety measures. Though the cause for concern is legitimate, Larry Sellers is taking it all in perspective. 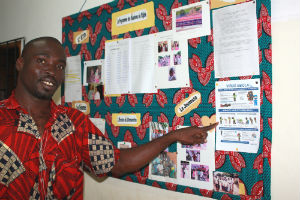 “Realize that the land area involved in these three countries is fairly small,” he says. “More than 90 percent of West Africa remains untouched by Ebola. Though the possibility of its spread is still a deep concern, only 8,500 out of more than 340 million people living in West Africa have come down with Ebola, which represents less than three thousandths of one percent of the population. Still, this is little comfort to those who have been affected by the deadly disease.”

Larry Sellers explains that the work of the Church of God in Côte d’Ivoire has been primarily one of education regarding the disease, and prayerful support. The churches have displayed posters to inform people how to recognize the signs of Ebola, as well as to lower the risk of contracting the disease. Once a month, many of the churches host all-night prayer vigils. Urgent concerns like the Ebola outbreak have been covered in prayer by these faithful saints.

“People here in Côte d’Ivoire are very concerned and alert to the possible spread of Ebola into their country,” Larry explains. “As a result many people are changing their behavior to reduce physical contact with others. For instance, while it is customary for people to greet each other with a handshake, or by 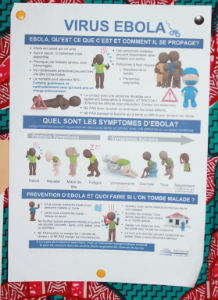 touching cheeks or foreheads, now instead of these physical greetings, people tend to wave to each other or touch their heart as a sign of greeting.”

One of the greatest threats facing these West African countries is not Ebola itself, but the impending economic impact on the region. Recent restrictions on food sales, trade, and travel have left West African nations in a financial bind. “In the infected countries many people are not able to work in their fields,” Larry reports, “thus having no assurance of food for the coming dry season. Even in countries where there is no Ebola outbreak, such as Côte d’Ivoire, the sale and consumption of wild game or bush meat has been banned, causing the cost of other meats to go up, robbing traditional bush-meat hunters of their source of income.”

At this point, evacuation procedures are not under consideration for Larry and LeAnn Sellers. They are monitoring the situation closely, and if the virus should spread into Côte d’Ivoire, they will consider a contingency plan for evacuation “if and when it becomes necessary.”

Larry insists that the best weapon against the spread of Ebola, as while as the heartaches and challenges of life, is prayer. The Church of God in Cote d’Ivoire continues to grieve the loss of national leader and radio speaker, Daniel N’Goran—unrelated to Ebola—which only added to the challenges the church faces. But Larry explains that the church continues to press on. “We continue to preach the same gospel that we have always preached, that our ultimate security, strength, and salvation is found in placing our full trust in Jesus Christ as Savior, Lord, and Healer. While we do not believe that God is the author of disease, pain, suffering, and evil, we recognize that he can use such things to increase our trust in him and not in things of this world.”

Please join Larry and LeAnn Sellers in prayer that through the Ebola crisis, West Africans would be receptive to the message of hope in Jesus Christ.

To stay up to date with the latest on global prayer efforts to end Ebola, Larry and LeAnn recommend visiting www.praytoendebola.org. To learn more about Global Missions, visit www.chogmissions.org. Thank you for you prayers.