By chogministries
Posted September 21, 2012
In All Church of God
Dr. James Williams Remembered2012-09-212012-09-21https://www.jesusisthesubject.org/wp-content/uploads/2016/07/ChogLogo-Light.svgChurch of God Ministrieshttps://www.jesusisthesubject.org/wp-content/uploads/2016/07/ChogLogo-Light.svg200px200px

James E. “Jim” Williams, 80, of Anderson went to be with his Lord on September 20, 2012 at his residence following an extended illness.

He was born on June 4, 1932 in Anderson, IN to William Perry Williams and Gladys (Williams) Williams McGinnis.

He was an Ordained Minister of Church of God serving in Centralia, IL for 6 years, Racine, WI for 7 years, and 31 years at Church of God World Service.

He worshipped at Park Place Church of God. He was a member of Kiwanis Club. He enjoyed playing golf. 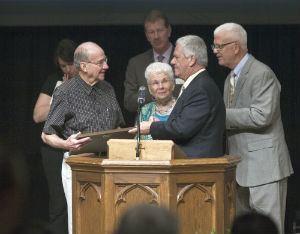 He is preceded in death by his father, William Perry Williams, mother and step-father, Gladys and Olen McGinnis.

A service of celebration of his life will take place on Monday, September 24, 2012 at Park Place Church of God at 11:00 am with Dr. David Markle and Rev. Dwight Dye officiating. The burial will take place at a later date at East Maplewood Cemetery.

The visitation will be on Sunday, September 23, 2012 from 2:00pm until 6:00pm at Rozelle-Johnson Funeral Service and friends may call at the church 1 hour prior to the funeral on Monday.

Memorial contributions may be given to Park Place Church of God Community Center or St. John’s Hospice.

The family would especially like to thank Dr. Jalal, staff, and volunteers at Simon Cancer Center in Indianapolis, Dr. Scott Green of Anderson, and Saint John’s Hospice Service and special nurse, Kathy Z.

During his tenure with World Service in Anderson, Indiana, he was active in both East Side and Park Place Church of God congregations. From 2003 to 2004, he served as a prayer partner with the general director of Church of God Ministries, Dr. Ronald V. Duncan.

Though illness plagued the final days of his life, Williams remained steadfast in his commitment to the Lord and family. He leaves behind his wife, Rosemary Williams; son James Dwight (Katherine Hicks); daughter Joy Lynette (Timothy Coppess); and grandchildren Dylan, Joel, Jacob, and Joshua.