By chogministries
Posted April 4, 2018
In All Church of God, Give Life
Double Adoptee Walks Across Country for Foster Care, Adoption Awareness2018-04-042018-04-04https://www.jesusisthesubject.org/wp-content/uploads/2016/07/ChogLogo-Light.svgChurch of God Ministrieshttps://www.jesusisthesubject.org/wp-content/uploads/2016/07/ChogLogo-Light.svg200px200px 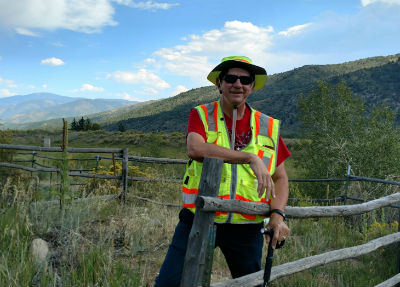 Glenn Koster takes a break along the scenic countryside.

Abandoned and alone, Glenn Koster was adopted at age six. Due to neglect and abuse, he had to be adopted again at age ten. Sadly, this traumatic childhood did little to prepare him for the real world and, as such, Glenn found an outlet for his pain in alcohol and violence. The Lord turned his life around though, and in 1989, he forever left his alcohol and abuse in the past. Desiring to pay it forward, but not permitted to foster or adopt because of his record, Glenn has instead determined to raise awareness for foster care and adoption. As he walks across the continental United States, the Church of God minister and Leadership Focus participant is encountering not only a wide variety of people, but also his heavenly Father in a fresh and powerful way.

Think about it. He’s got 4,400 miles and eighteen states to cross by October. Glenn and God have had plenty of one-on-one time! Having started in Miami, Florida, and planning to finish in Seattle, Washington, Glenn Koster has already covered hundreds (soon to be thousands) of miles toward his goal. During this time, he’s noted that God has taught him the discipline of silent listening. “By nature, I am one to listen briefly and then begin formulating solutions,” Glenn reflects. “With the mechanical issues and medical issues, I’ve had to learn to be quiet and listen while God takes control.”

Indeed, the journey has been rewarding, but taxing, as well, and not only because of the close brushes he’s had with vehicle traffic. As his wife tags along in their RV, they’ve endured the frustration that accompanies recurring mechanical failure. Not only that, but Glenn recounts the cellulitis that broke out on his leg. But God did take control. It was during those same days Glenn was in recovery that the RV was in the repair shop. No additional time had to be cut from their cross-country progress. 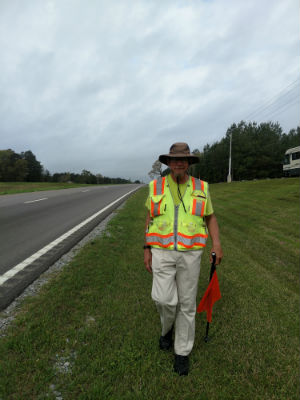 Glenn walks along a highway in the South.

Of course, Glenn didn’t set out for alone time. That’s been a byproduct of a greater mission God’s called him to embrace this year. From the parking lot of Walmart to the dozens of newspapers featuring his story as he travels through local municipalities, to the pulpits he’s been blessed with the opportunity to stand behind, this journey’s all about telling anyone and everyone about the need for—and accessibility of—foster care and adoption. “It’s been a blessing to see the light bulb go on for people who thought they could never be involved in the foster care system,” Glenn explains. “When they discover that there are things they can do without being a foster parent, it opens up a whole new world. With foster care, people can be foster parents, respite parents (taking foster kids for a weekend to allow recovery time for foster families), CASA volunteers, providers of backpacks or bags to first-time foster kids, and mentoring. With adoption, they can become a foster parent or support the family that brings home a newly adopted child—much like most churches support families with newborn infants. They can also support the financial needs of adoptive parents, covering both legal and personal expenses related to someone adopting a child.”

In situations where local agencies don’t exist, Glenn is happy to connect them with state resources. If necessary, he’ll connect them with national agencies. Through information and resourcing, Glenn has already proven to be a God-send on the ground. One family he met has dealt with an adopted child now thirty-four years old and struggling. Glenn’s story offered them hope. The pastor of a church where Glenn spoke had recently learned that there are no qualified foster homes in their entire county. He’d been wrestling with the best way to communicate the need to his congregation to somehow get involved. The intersection of Glenn’s walk and that church was providential.

Glenn and his wife call First Church of God in Hutchinson, Kansas, home. Among other involvements there, he’s served as a Bible study teacher and she’s served on the worship team. Thanks to video and Internet technology, he’s been able to continue to teach his class while on the road! But perhaps the biggest blessing regarding his ministry is the perfect fit he’s been for Leadership Focus. Currently licensed as a Church of God minister and scheduled for ordination next year, Glenn Koster has valued greatly the camaraderie and the flexibility of the experience. “Honestly, how many programs are there that would enable me to keep going, even when on a cross-country walk?!”

When Glenn Koster crosses the finish line this October in Seattle, his ministry definitely won’t be done. In addition to the published author continuing to write books and planning to co-host a revival, he anticipates ultimately accepting a pastorate at a local church.

Across North America, and around the world, God is on the move in the Church of God. Reach our world. Donate today at give.jesusisthesubject.org.