Door to Door Evangelism in India

By chogministries
Posted December 9, 2013
In All Church of God, Global Strategy
Door to Door Evangelism in India2013-12-092013-12-09https://www.jesusisthesubject.org/wp-content/uploads/2016/07/ChogLogo-Light.svgChurch of God Ministrieshttps://www.jesusisthesubject.org/wp-content/uploads/2016/07/ChogLogo-Light.svg200px200px

Being called to spread the gospel to those where you live might not seem like a large task, unless that includes over twenty million people!

A monumental task has been undertaken in Kolkata, India, by the Assembly of NEW Indian Church of God (ANEWICHOG). The PIN Code Project is the way the ANEWICHOG, led by national director Sudipta Nanda, intends to systematically reach every person in the city. PIN codes are essentially the same as ZIP codes in the United States. There are 156 PIN codes in Kolkata.

Sudipta Nanda shares more about The PIN Code Project: “The ANEWICHOG strives to knock on each door in the PIN codes to provide an opportunity for every person to [receive] the gospel and read for themselves.” He continues “We also share through DVDs, so they may experience the life story of Jesus Christ at least once in their lifetime.” 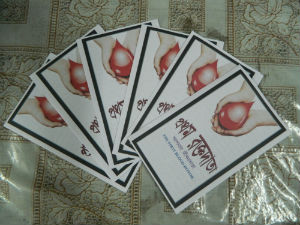 Their strategy is to provide a gift that includes a New Testament titled Premer Vani (Message of Love) and a gospel tract, “Pratham Raktadata” (The First Blood Donor). Both are prepared with colorful ribbons. Additionally, Campus Crusade for Christ produced two DVDs, The Life of Jesus and The Transformation of a Hindu Priest. These are available to be purchased by those who would like more information.

Fourteen volunteers began this project in a section of Kolkata known as Kalighat. This is a Hindu center for the goddess Kali, a place where animals are sacrificed every day to appease the goddess. “It was a big challenge,” Sudipta shares, “but our evangelists prayerfully marched forward to take the good news from door to door.”

The results that are being realized are nothing short of a miracle. In the first four days of the effort, 99 percent of those approached accepted the gospel gift pack. More than 2,500 gospel packs were provided to interested families, 506 DVDs were sold, and 55 individuals spent time with the evangelists—with some requesting prayer immediately.

Richard Fields, director for Helping Hands in Motion, a Mission Connection partner with Global Missions of the Church of God, has been working with the Assembly of NEW Indian Church of God. He believes in the power of Christ revealed through their hard work. “There are so many stories of where people have given their lives to Christ in spite of persecution from family and friends,” says Richard.

When someone converts from Hindu or Muslim to Christianity, the persecution experienced can be quite severe. The result can be banishment from the community or family and even the threat of death. Richard Fields shares one such story: “When one young man informed his family he had become a follower of Jesus Christ and was no longer a Hindu, his family took him out of town and threw rocks at him to kill him.” They were unsuccessful, and the ministry that he shared eventually brought his own mother to Christ as well.

When asked what it will take to continue ministry in India, Richard answers, “It will take us working together, putting aside our differences, and realizing we are in this together to reach the unreached for Jesus Christ.”

As those around the world prepare for Christmas, Sudipta Nanda and his team also prepare. “We want to seize the opportunity of Christmas when people are ready to hear about Jesus.” Their goal for December is to reach more than half a million people with the gospel of Christ. “We need your prayers to move forward,” Sudipta says. “Our time seems less, yet the task is huge. Please pray.”

If you would like more information about this ministry, please contact Richard Fields at Helping Hands in Motion at www.helpinghandsinmotion.org and watch this YouTube video about the project.