By chogministries
Posted March 3, 2015
In All Church of God
Dentist Delivers Hope, Healing to ISIS-Ravaged Iraq2015-03-032015-03-03https://www.jesusisthesubject.org/wp-content/uploads/2016/07/ChogLogo-Light.svgChurch of God Ministrieshttps://www.jesusisthesubject.org/wp-content/uploads/2016/07/ChogLogo-Light.svg200px200px 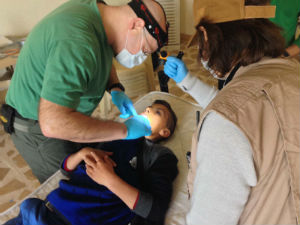 Some would say only a fool runs into a burning building. But any good parent would brave the blaze to save a son or daughter in danger. In many Middle Eastern countries today, children of the heavenly Father are facing raging infernos on a daily basis. David Sperow, a dentist from Eastland Church of God in Lexington, Kentucky, has discovered that when God’s concerns become our concerns, we look at every soul as worth saving—regardless of the flames that may flare up on all sides. David recently delivered relief supplies to refugees in Iraq who have been displaced by ISIS. Considering what’s at stake, it’s nothing for David Sperow to storm the gates of hell and reclaim what has been stolen.

Near the onset of fall 2014, David Sperow helped coordinate a mission trip to Iraq on which team members brought food, clothing, medical supplies, and Bibles to more than 4,200 refugees. Pastor Austin Abney of Revolution Church in Wichita, Kansas, accompanied the team and offered much-needed spiritual support. By Christmas, it was David Sperow’s turn to step foot on Iraqi soil. Along with his wife Marty, and an experienced team that also included two physicians and a former military contractor, David helped distribute twenty-five thousand pounds of food, more hygiene supplies, and Bibles. The team selected refugee camps to visit that had not been helped recently by aid agencies. These refugees are entirely dependent on aid because 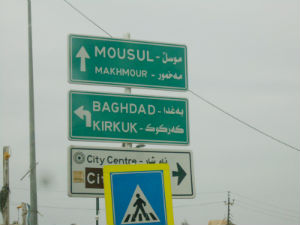 ISIS forced them to leave behind nearly everything in fear for their lives. “One of the camps had people who were down to eating cornmeal,” David explains, “because it had been at least two months since any food aid had arrived from an aid agency.” David’s team dared to stand in the gap.

Dental and other medical services were also provided to refugees, as needed. While the dental needs weren’t the worst David has seen, there was at least one medical incident that he will never forget. At the end of a busy day, David was packing up his supplies and gazed over the camp, taking it all in. Children were playing and others were waiting in lines, but David’s attention shifted to a young woman in her twenties who was carrying a toddler. This young mother moved quickly ahead of the line, but her frantic behavior was explained when her young son bent over, “vomiting profusely.” The image of this desperate mother will be forever seared into David’s mind. 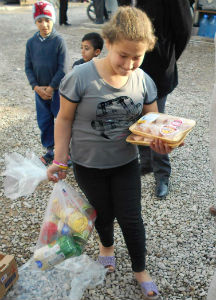 “I saw the look of love that a mother has for her child, but realized that there was absolutely nothing she could do to ease the suffering of this little one,” David recalls. “Just a few months before, she was doing whatever it was she did. Her husband was going to work, and she was raising her child. She had a future, and so did her child. That all changed when ISIS rolled in and they had to run for their lives. At that moment, I was overwhelmed with emotion, stepped into the shadows where I had a little bit of a breakdown. God was very clearly telling me that it is essential that my heart break for the same things that break his. God told me, ‘This is why you are here. I always hear the cry of the oppressed, and I send my own to answer that cry as my hands and feet. You are serving the least of these in my name.’ I knew that we were there for such a time as this, and that the physicians were going to use their skills and knowledge. God made it clear to me that if we hadn’t said Yes when he said, ‘Will you go to Iraq?’ that the outcome for this mother and her child had the potential to be much different than what it was going to be now.”

David Sperow isn’t an ordained pastor. He’s doesn’t have a degree in theology. But he bears the name of Christ, and he’s not taking that lightly. Though the ministry he conducts may be physically dangerous, David doesn’t flinch. “ISIS is still fully-functional,” David explains. “A couple of days ago, they launched an offensive that was only about twenty-eight miles away from where we were in Erbil. But every ministry is dangerous. We are not doing anything different than any other believer acting in obedience. We were all born into a world at war. The enemy of souls has been trying to kill, steal, and destroy since the day we were born.”

Jesus is the subject. So take a risk. Be bold. Reclaim what hell has stolen. David offers a word on risk tolerance to sum up the kind of boldness Jesus offers: “If you don’t push beyond it, you will never know how far it can go. The comfort zone is not a safe place; it’s a prison. It’s merely something that defines the known boundary of today…Boundaries are for other people. This is a situation where you are the captive and you can set yourself free. Just sitting there, doing nothing new, never accomplished anything. It may not make sense to those around you. Don’t worry about them—they are still in their comfort zone prison. Their opinions of your prison break are meaningless. They can catch up later if they ever realize they too were made for so much more.”