Dayton Churches Distribute Love in the Wake of Disaster

By chogministries
Posted July 25, 2019
In All Church of God, Disaster Relief, Give Life, Great Lakes
Dayton Churches Distribute Love in the Wake of Disaster2019-07-252019-07-25https://www.jesusisthesubject.org/wp-content/uploads/2016/07/ChogLogo-Light.svgChurch of God Ministrieshttps://www.jesusisthesubject.org/wp-content/uploads/2016/07/ChogLogo-Light.svg200px200px 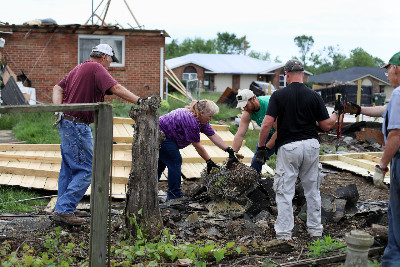 Memorial Day weekend wasn’t all barbecues and sunshine across the Midwest. Especially from central Indiana to the Dayton, Ohio, area, festivities were cut short on May 27 due to an outbreak of tornadoes, the likes of which most residents had never seen. More than a dozen tornadoes touched down between the state line and the Interstate 75-Interstate 70 interchange, with winds up to 170 miles per hour in the worst twisters, one of which was a half-mile wide. To make matters worse, these storms came after dark and hit many low-income neighborhoods the hardest. Without hesitation, the Church of God sprang into action, offering assistance wherever it was needed. Even since the newness of the tragic events has worn off and the national spotlight on Dayton has dimmed, congregations like Salem and Hopeland continue to distribute helping hands, supplies, and love in the wake of disaster.

Salem Church of God is situated on the west side of Dayton in a community called Clayton. South of most of the storm damage, the congregation was still affected greatly. Thankfully, only a few homes of families in the congregation sustained major damage. But, on the Sunday immediately following the tornadoes, Kyle Hayes, outreach and missions pastor, posed the following question to the congregation: “How many of you were impacted directly or know someone close to you who was impacted?” In a signifying response, nearly everyone in the congregation rose to their feet.

Kyle and his wife Jessica, who serves as Salem’s outreach coordinator, weren’t sure what kind of volunteer pool would be available right away, as widespread power outages persisted. The next day, when the city of Clayton asked Salem Church of God if they would help distribute water through the Red Cross, they were blown away by the response. Jessica explains, “People responded immediately. We had volunteers passing out water from our parking lot for three days straight.” 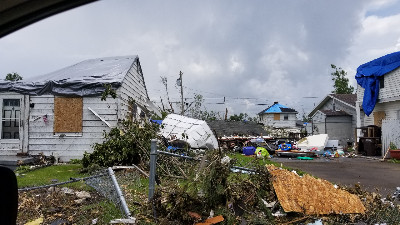 Destruction in Dayton area after the May 27 tornadoes.

Of course, water distribution was only one of many aspects involved in disaster relief for Dayton. Debris cleanup was an imminent need, with some homes having been partially or totally destroyed (some parts of homes have never been located). Volunteers came in droves to support their community. One of the church’s biggest “Serve Days” was the one that took place after the tornado disaster. At one point, Jessica explains, “Authorities had to turn people away because there wasn’t enough room for all the volunteers.”

Additionally, the church raised $20,000 over the weekend following the storm, even without much advertising. $5,000 more has come in since, and Ohio Ministries of the Church of God has collected an additional $25,000 for relief efforts. Salem has coordinated eleven service projects in the weeks since, tallying up some 1,300 hours of community service. 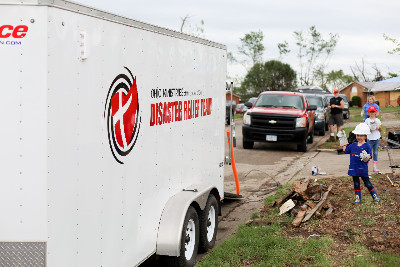 All ages have come out to bring disaster relief to Dayton.

Few locals had ever experienced a disaster like this one. Kyle had been to Panama City, Florida, on a hurricane relief trip and had witnessed firsthand what weather can do, but neither Kyle nor Jessica had ever seen it happen in their community. Though they wouldn’t have chosen the means, Kyle explains there has been a lot of good coming out of this.

“One of the biggest blessings after the storm has been seeing Dayton come together,” Kyle says. “We now have outreach partners we didn’t have before the storm. We now continue to work with nonprofits we simply didn’t know about, and it’s kind of been a silver lining.”

The other opportunity the church has seized is the chance to get acquainted with more of the neighborhoods. “We were invited into homes and people’s front and backyards, meeting people we would have never met otherwise, and spanning across racial divides,” Kyle explains. “Because of how the storm’s path affected everybody, our congregation partnered with a predominantly black church across the street from us and will continue to partner with them.” 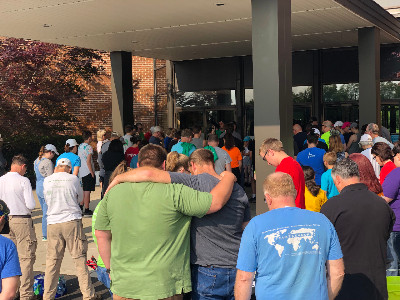 Moved by the Spirit, the church allowed the disaster to disrupt their normal summer routine. Vacation Bible School, as it would have normally taken place, neither seemed appropriate nor helpful for the community Salem is called to serve. Leadership decided to cancel the usual VBS experience at the church and will instead host two community block parties in August as a part of the church’s month of intentional community service projects—“Love Does.” One will take place in the heavily damaged and lower-income neighborhoods of Trotwood. The other will take place at Hopeland Church, a sister Church of God congregation on the north side of Dayton. One of the primary thrusts of these block parties will be to distribute back-to-school supplies, especially for families displaced by the tornados. Because, though the news about the Dayton tornadoes has died down, disaster relief could be ongoing for two or more years. Few understand the importance of this like Hopeland Church.

Through Facebook, Pastor Joel Burton of Hopeland has communicated the urgent and ongoing need of the community. He says volunteerism was strong at the outset, but it has started to wane. The survivors of the storm are displaced, some living in apartments, others in hotels, others out of the area with relatives, and others are choosing to remain in uninhabitable homes damaged by the tornadoes. They’re collecting brand new school supplies, bookbags, shoes, and monetary donations with the goal of distributing love—in the form of 15,000 backpacks and 5,000 new shoes.

They, along with Salem and other local churches, will not forget that this disaster relief effort is a marathon, not a sprint. They will continue to walk alongside local families as they make the transition into permanent, safe housing, all the while distributing the love of Christ by whatever means possible.