By chogministries
Posted January 11, 2019
In All Church of God
D. S. Warner Life Story as Told by AU’s First President2019-01-112019-01-11https://www.jesusisthesubject.org/wp-content/uploads/2016/07/ChogLogo-Light.svgChurch of God Ministrieshttps://www.jesusisthesubject.org/wp-content/uploads/2016/07/ChogLogo-Light.svg200px200px 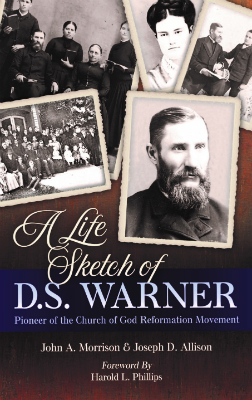 A new biography of Church of God pioneer D. S. Warner brings together a series of articles that appeared in the longtime Church of God magazine, Vital Christianity, leading up to the church’s centennial in 1980. Drawn from an unpublished book manuscript by John A. Morrison, former president of Anderson College (now University), A Life Sketch of D.S. Warner tells the evangelist’s story as a colorful narrative.

“Call it creative nonfiction,” says Joseph Allison, former managing editor of Vital Christianity. “Dr. Morrison researched the facts with care, but tells the story with imaginary dialogue and rich details that draw a reader into the experience.” Allison compiled and completed Dr. Morrison’s storyline for the series. A Life Sketch includes a foreword by Harold L. Phillips, who was editor-in-chief of Warner Press when the articles were first published. The book also includes half a dozen historic photos from the Church of God Archive.

D. S. Warner taught a radical message of Christian unity and personal holiness. He challenged believers to leave their rival denominations to show that they were all one in Christ. These “come-outers” held no formal church membership, had no governing church officials, and recognized no ministerial credentials. Warner promoted this movement through a weekly paper known as The Gospel Trumpet, which became Vital Christianity in 1962.

“We can still learn a great deal from Warner’s life and message,” Allison explains. “He was unafraid to confront the injustices of his age, both in the church and in secular society. Though he lived during the Gilded Age, when there was a deep chasm between those who lived in affluence and poverty, Warner extended the love of Jesus Christ to all kinds of people. And he dared to try innovative methods of communication to reach as many people as possible.”

A Life Sketch of D.S. Warner is available in paperback and e-book formats from Jordan Publishing. Search for it on Amazon and other major book retailers.