Crisis in Ukraine: Reflections and Opportunities

By chogministries
Posted February 24, 2022
In All Church of God, CHOG, Disaster Relief, Global Strategy
Crisis in Ukraine: Reflections and Opportunities2022-02-242022-03-09https://www.jesusisthesubject.org/wp-content/uploads/2016/07/ChogLogo-Light.svgChurch of God Ministrieshttps://www.jesusisthesubject.org/wp-content/uploads/2022/02/pray_for_ukraine_graphic.png200px200px

As news spread around the world of the Russian military’s drive into Ukraine, the Church of God, like so many others, paused to pray. The invasion, which began overnight on February 23 and 24, is a sobering reminder that, even in the heart of Europe, peace and stability can suddenly evaporate. While world leaders had warned of the danger for many days before, much of the world—and much of Ukraine—found it hard to believe that in the year 2022 Europe would find itself in such crosshairs.

The headlines and talking heads have, of course, drawn attention to the geo-political and national tensions provoking the invasion. But, the Church of God is today focusing on our vibrant church families in both Russia and Ukraine.

The Church of God in Ukraine was born in the 1980s and 1990s by the ministry of Christians Broadcasting Hope (CBH) in the Russian language. Produced in Germany and beamed behind what was then the Iron Curtain dividing Europe, CBH’s Russian language broadcast found an audience all across Ukraine. Considered a Soviet Socialist Republic in those days, taking its cues from the Kremlin in Moscow, Ukraine was without a free press or other channels of free expression. Religious broadcasting was forbidden in a Soviet orbit grounded in atheism. Nevertheless, CBH radio got through, and whole communities were formed, clandestinely, in homes, gathered around the radio, to hear the gospel, to learn about Jesus, and to embrace His way and calling.

These house churches were not discovered until the unraveling of the Soviet Union, when batches of letters addressed to CBH found their way through the fissures and cracks in the wall of a crumbling Iron Curtain to our studio in Germany. Ultimately, CBH staff from Germany and the United States traveled to Ukraine to establish face-to-face contact. Today, the Church of God in Ukraine is a dynamic and flourishing assembly of churches distributed across the country, with extraordinary young adult leadership standing tall on the shoulders of a first-generation gathered around their radios. They love Jesus. They love the Church of God. They love their country. And they love their brothers and sisters in the Church of God across the border in Russia.

The Church of God in Russia dates to the mid-1990s, as Russia walked away from its Soviet past and looked for new anchors in its society. Teams of Church of God pioneers from the United States and Canada were welcomed in Russia, as they taught English, using the Bible as a textbook. Again, a world framed by atheism gave way to a thirst for God and discovered Him in Christ. Great souls who love Jesus, who love the Church of God, and who love their country, as well, are firmly planted now in Russia, too.

Now both of these important parts of our global family find themselves swept up in a tide of political events redrawing the map of life as they have known it for decades.

Our congregations of the Church of God in Ukraine are all now under threat. The explosions, and the advance of tanks, missiles, and soldiers are turning their world upside down. Church of God families are already uprooted from their homes and fleeing for safety. But they have quickly discovered that now part of the country is safe. Many Ukrainians are seeking refuge by fleeing to neighboring Poland. Like a natural disaster, this manmade disaster is disorienting and terrifying. The losses are staggering. The future appears dark.

We have received reports from some of our Ukrainian pastors, even as communication is being interrupted. “Thousands are on the run, but you don’t know where to flee.” “The massive attacks came simultaneously from the entire east, from Belarus, and from the south….” “[We have been] already over twenty-four hours on the road.” “We expect God’s intervention. Only He can stop the further bloodshed and destruction of Ukraine.” “The brothers and sisters in Ukraine thank you all for your support.”

These words have come to us from the field within hours of Russian forces crossing the Ukrainian border. The Church of God in Germany has close ties to the Ukrainian church and is also in touch with us, as we work together to provide relief. Germany, which also stands to suffer some losses in the wake of the Ukrainian crisis—as does much of Europe—is gravely concerned, also. The German Church of God leadership has written to Church of God in the United States and Canada, “Thank you; (we) know that you stand behind us and support us and especially our brothers and sisters in Ukraine in prayer.”

Church of God Ministries, on behalf of the General Assembly, has already set in motion relief for the Ukrainian Church of God and its members, providing emergency cash to bridge the gap in the crisis. Some are already refugees, without shelter, on the run. Others are trying to navigate all of the challenges, from physical danger to scarcity of supplies, near their homes. We carry all close to our hearts.

If you would like to help, your gifts are needed and welcome. Working together with the Church of God in Europe, Church of God Ministries will see that your sacrifice is delivered in Jesus’ name to the suffering Church of God in Ukraine. Just visit our Disaster Relief page: www.JesusIsTheSubject.org/disaster-relief and stay tuned to CHOGnews at www.chognews.org.

And pray. Pray for the Lord’s prevailing mercy and provision. Pray for peace. 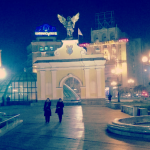 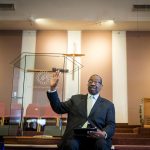 Indelible in Every Sector: Reflections on T. Allen Bethel’s Impact on Church and SocietyAll Church of God, CHOG, Northeast, Western