By chogministries
Posted June 12, 2014
In All Church of God, Colleges & Universities
Covenant Productions wins Emmy for AU’s Candles and Carols2014-06-122014-06-12https://www.jesusisthesubject.org/wp-content/uploads/2016/07/ChogLogo-Light.svgChurch of God Ministrieshttps://www.jesusisthesubject.org/wp-content/uploads/2016/07/ChogLogo-Light.svg200px200px 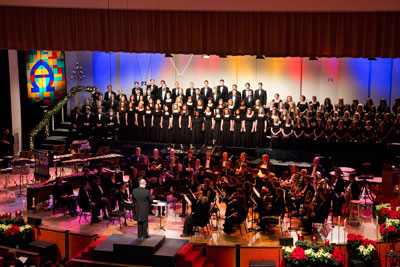 Three AU faculty/staff received Emmy® awards for their work on Anderson University’s Candles & Carols: David Armstrong, director; Dr. Donald Boggs, producer; and Mark Dawson, editor. Armstrong is the operations director for Covenant Productions®, while Dawson is the producer/director. Boggs is a professor in the Department of Communication Arts and general manager at Covenant Productions®.

“We’re gratified by the Emmys awarded by our professional peers to our work on Anderson University’s Candles & Carols,” said Boggs. “Part of our Christmas joy each year is delivering this program to audiences across the country and the world.”

Covenant Productions® has received over 50 awards including Emmy® awards for A Ripple of Hope and a previous production of Anderson University’s Candles & Carols. In 2013, an Anderson University communication arts class received a Student Emmy® for Indianapolis Island in the Student: Arts and Entertainment/Cultural Affairs category.