By chogministries
Posted February 6, 2019
In All Church of God, Global Strategy
Côte d’Ivoire: Missing Miracles in Our Midst2019-02-062019-02-06https://www.jesusisthesubject.org/wp-content/uploads/2016/07/ChogLogo-Light.svgChurch of God Ministrieshttps://www.jesusisthesubject.org/wp-content/uploads/2016/07/ChogLogo-Light.svg200px200px 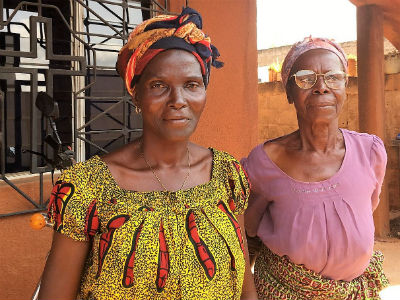 Abigail and her friend who had been blind.

We get busy with so many things in our lives, that we sometimes miss important things in the lives of our family or friends. Do we not also get so busy that we miss something amazing that God is doing right in our midst?

In visiting a friend this week, I was amazed at the first sentence she said to me: “Mama, God has really done something amazing! Let me tell you what he has done!” As my friend Abigail began to share, there was such excitement in her voice that I was listening to make sure I caught every word.

Abigail’s voice intensified as she continued: “I was asked to help a woman in our village that I did not know very well get back to her home. As I approached the woman, I felt my heart skip a beat and wondered if the Lord was telling me something. As we walked I realized this woman was blind. We talked a little as we came closer to her home. Just then, a man came by shouting, “If anyone is blind or having eye problems, they need to go to the orphanage on the other side of town tomorrow.” Abigail shared, “I felt my heart skip again!” She thought, “Lord, am I supposed to take this woman to the orphanage on the other side of town?” 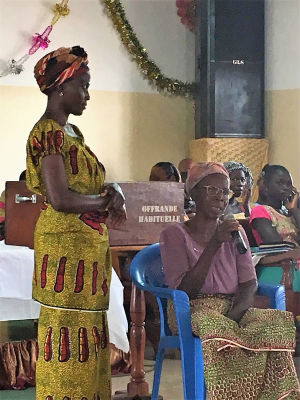 Abigail’s friend testifying to her miracle.

Early the next morning, Abigail took the woman to the orphanage, though she had never been there before. She learned that people had come very early to see some doctors to check their eyes. Abigail continued, “When we arrived at the place, there were so many people, I wondered how I would be able to help this woman to see the doctor.” She continued, “I had my friend sit down while I stood in line to get a ticket for her to see the doctor.” Abigail continued, “When we got into the office, the doctor examined my friend’s eyes and then said that she needed to come back very early the next morning—to have an operation!” Abigail, not having the means to pay for this woman’s operation, said, “If that is what God wants to happen, then we will go and see what God will do!”

The two women went back the next morning; the doctors took the woman for her operation as Abigail waited. Nothing was said about having to pay for the procedure. When the operation was finished, the doctor told Abigail that her friend would need to stay the night. The next morning, Abigail went to see her friend. When the doctors removed the bandages, the woman was so excited that she began to shout, “I can see! I can see!” The doctor told Abigail that her friend had cataracts and had them removed. The woman needed to go home to rest and keep the bandages on for one more night.

Abigail was thrilled to know that God had spoken to her and that she did not miss his still small voice. In that moment, he helped her see what she needed to do to witness a miracle right there. Because she was listening for God to speak, she did not miss a miracle in her midst.

LeAnn and Larry Sellers are missionaries for Global Strategy to Côte d’Ivoire. Learn about the Sellers and discover opportunities to partner with them at https://www.chogglobal.org/llsellers/.