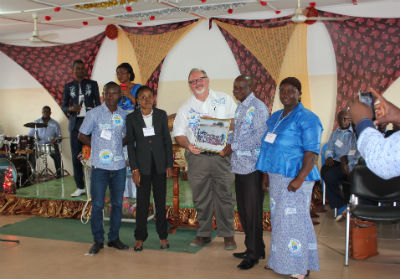 An early member of the church presenting a gift of a photo of the first congregation in Abidjan.

Twenty years ago, the picture of the Church of God in Côte d’Ivoire looked nothing like it does today. Roughly twenty-five individuals, mostly English-speaking immigrant Christians from other African countries outside of French-speaking Côte d’Ivoire, composed the new fellowship. Near the end of November 2017, the Church of God in Côte d’Ivoire celebrated its twentieth anniversary, and the incredible kingdom gains that have taken place approximately twenty-five pastors—and two thousand believers—later. Missionaries Larry and LeAnn Sellers have been there since the beginning and were present at the anniversary. To mark the occasion, we offer the Church of God beyond Côte d’Ivoire a brief look back at how God has been at work over the past two decades in this West African nation, as well as a glimpse of where the ministry is headed.

Early on, the goal was to see indigenous leadership take hold. With this in mind, leadership development has always been at the core of what the Church of God has been about in Côte d’Ivoire. “We went in with the assumption that we would not be there forever,” Larry explains. We would train local leaders to carry on the church whether we were there or not. For the most part, all of our churches have been led by African pastors from the beginning.” 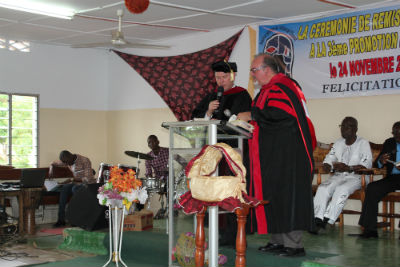 To ensure leadership development would take place on a consistent and high-quality basis, IBAO was established in 2007—an acronym which, in English, means West Africa Bible Institute. For ten years, IBAO has set and raised the standard for ministry education and preparation in the region. Newer missionaries like Bobby and Jenny Mihsill have since come alongside the work, offering their teaching skills and cross-cultural experience. The tenth anniversary of IBAO was celebrated in conjunction with the twentieth anniversary of the Church of God in Côte d’Ivoire, along with the graduation of eight students.

Challenges have been mixed with blessings over the years, but the Sellers and the Church of God in Côte d’Ivoire have persevered. The celebration in November gave the missionary couple a chance to reflect on what God had accomplished through them, the indigenous leadership, as well as Sherman and Kay Critser, who served alongside Larry and LeAnn for twelve years. Of course, the greatest blessing has been witnessing God’s call and raising up new Christ-centered leaders in the church. Larry says the most exciting part is watching the second generation of leaders take their place in ministry—many of whom are now in their twenties and grew up in the church from childhood. The church is “maturing,” as Larry puts it, even while the church is composed of young believers primarily under the age of thirty-five. Only a few people remain who were in the church twenty years ago, as early congregants were transient, but the newest and youngest demographic are establishing roots that should bear much more fruit in the years to come. 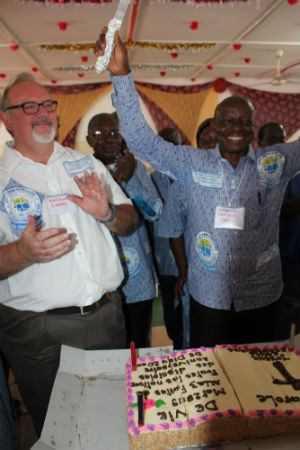 Pastor Emmanuel, national superintendent of the Church of God in Côte d’Ivoire, along with Larry Sellers, cutting the 20th anniversary cake.

Speaking of the years to come, Larry and LeAnn anticipate many more blessings for and through the Church of God in Côte d’Ivoire. As the Church of God in Côte d’Ivoire received God’s love and favor, they have no intention of hoarding it for themselves. They want to pass it along, a practice which they’ve already done by beginning to send missionaries to the neighboring country of Burkina Faso. Larry and LeAnn look forward to this happening more and more, and expanding to other French-speaking West African countries. Additionally, the dream is to see even more indigenous leadership take hold, including at the West Africa Bible Institute.

But first, it was time to celebrate—and celebrate, they did! Ivorians—people of Côte d’Ivoire—know how to celebrate! Through song, dance, a parade through Yamoussoukro, and special speakers from across the globe (including the Webbs and Pastor Kerry Robinson of East Side Church of God in Anderson, Indiana), the twentieth anniversary celebration was a beautiful reminder of God’s faithfulness and love.

To support the Church of God in Côte d’Ivoire, visit http://chogglobal.org/mission-projects/projects-africa/. Learn more about Global Strategy at www.chogglobal.org.