By chogministries
Posted June 25, 2015
In All Church of God
Convention Wednesday: Storming the Gates of Hell, Bold Reclamation2015-06-252020-02-29https://www.jesusisthesubject.org/wp-content/uploads/2016/07/ChogLogo-Light.svgChurch of God Ministrieshttps://www.jesusisthesubject.org/wp-content/uploads/2016/07/ChogLogo-Light.svg200px200px

A boy delivered from the chains of captivity. An inner-city strip club purchased by a church and transformed into a community center. Barriers broken in secular Europe, making way for a new leadership development initiative. Women who’ve discovered the God-given, therapeutic qualities of horses—and the generous giving of people like you to make it possible. A stone rolled away from a tomb, ushering in the chance for all of our hearts to sing, “I’ve just seen Jesus and I’ll never be the same again!” And finally, God’s anointed, positioned in the world for such a time as this, to bring healing, to bring laughter, to bring necessary challenge. This is the witness of the Church of God, brought to fruition at different points over the past two thousand-plus years, but brought once again to our attention on Wednesday at Church of God Convention 2015.

June 24, 2015, at Crossings Community Church in Oklahoma City kicked off with a meeting of the General Assembly of the Church of God. Rebecca New-Edson, chair of the Assembly, offered a report that stirred the souls of the gathered saints with the same vigor and spiritual application as a camp meeting sermon for the ages. “There may be risk in moving away from the status quo,” she explained, “but most assuredly there is risk in staying there.” As such, the stage was set perfectly for honest and loving debate that reflected our unity in Christ. During the latter half of the General Assembly (look for a summary soon at www.chognews.org), others in attending the convention met in the Chapel at Crossings to worship the Lord and testify to his goodness through the heritage songs of the Church of God. 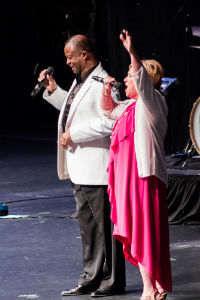 Proverbs says that a merry heart does good, like medicine. Based on feedback from last year’s convention, the planning committee agreed that at some point during the heart of this year’s gathering, convention-goers should be given a moment to breathe, process back-to-back sermons, and allow our souls to enjoy some lighter fare. At the Christian Women Connection luncheon, and then following during a session in the sanctuary, comedienne Anita Renfroe provided just the right dose of humor, time to rest, and spiritual sustenance.

After a short break, Steve Rennick, pastor of Church at the Crossing in Indianapolis, shared riveting stories of God’s heart for bringing about freedom for the captives. When believers boldly choose to step out of a life of ease, no longer accepting the culture’s lies about materialism and consumerism, miracles begin to happen. Sometimes we must “pray wild prayers” and truly ask God to transform communities through us. In this session, the Church of God also celebrated the commissioning of Mike and Heather Webb as newly appointed regional coordinators for Global Strategy to Africa.

Between the afternoon and evening sessions, a reception was held for the newly ratified fifth president of Anderson University, John Pistole. During the evening service that would follow, each Church of God college and university president joined Pistole and family on stage for a beautiful time of prayer and commissioning.
The much-anticipated evening event on Wednesday began with worship by the Crossings Venue Band. A capacity crowd was at hand to hear soaring vocalists Sandi Patty and Larnelle Harris sing several inspirational classics, including “More Than Wonderful” and “I’ve Just Seen Jesus.” Shrouded in mass anticipation, noted author and speaker Francis Chan then stepped up on stage. But he didn’t remain on his feet for long. In a humbling demonstration of his heart for the Lord and a strong desire to say only what the Holy Spirit would lay on his heart, Chan got down on his knees and asked the gathered saints to pray with him. 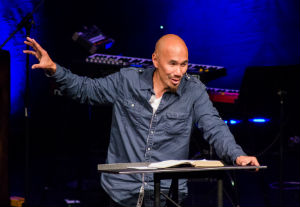 “The biggest thing the Enemy has stolen from us in America is our faith in the supernatural.” “Christ wants us to love each other so deeply that the world will know we are his.” “Loving self is actually opposite of love.” “A believer that’s rooted deeply survives even when everything goes wrong.” These are just a sample of the powerful words Francis Chan brought to the Church of God. So, do we preach the gospel by words alone? Do we preach by good deeds alone? Chan declared we must do both. Do we seek to follow Jesus for the treasure it can bring? Jesus is our treasure! Church of God, are we not just dreaming and visioning, but dreaming the right things? Thank you, Francis Chan, for being a vessel God could use for his church.

Thursday is upon us—the final day of Church of God Convention 2015. The General Assembly will convene, then Jim Lyon will join the Crossings Venue Band and Larnelle Harris for the closing session. Don’t forget—several great conferences are scheduled for the afternoon (check your program book)! Don’t forget also—the Spirit has spoken to us at CHOG Convention 2015. Now it’s time to accept the challenge he’s given to us. The Enemy of our souls may have stolen much, but God has called us to storm the gates of hell and boldly reclaim in Jesus’ name.

Learn more about Church of God Convention 2015 at www.chogconvention.org.