“It feels a bit like Christmas. You plan for it, you wait expectantly for it, and then it’s over. But, is it really over?” Jim Lyon’s words resonated not only through the grand World Center Marriott ballroom, but also in the hearts of hearers full of the spiritual feast consumed for four days straight. Prayers and plans had certainly preceded such Christmas-like celebration, as members of the Church of God family from coast to coast and across the globe descended upon Orlando, Florida, for the first international reunion since 2013. It was more than a reunion, though, more than a spiritual feast, and not just a passing highlight on the calendar. As featured speaker Lori Salierno-Maldonado put it, “When we embrace our unique place in history, in his larger transcendent story, we can make our contribution to God’s kingdom for such a time as this!” What happened at Church of God Convention 2019 and General Assembly in Florida will neither stay in Florida nor in the past. This really isn’t over.

In catalytic fashion, the Holy Spirit used the people, preaching, location, schedule, topics, timing, and flow of “Give Life 2019” to reignite fire in the souls of weary pastors, inspire leaders to realign their ministries with nothing but Christ at the center, and launch new ministries and ministers to advance the kingdom of God at home and abroad. New faces, new eras of ministry, and new ministries were announced, commissioned, and celebrated between Thursday, June 27, and Sunday, June 30. Strategic shifts and purposeful pivots highlighted and augmented what God is already doing, setting the stage for a new season of bold reclamation of that which hell has stolen. 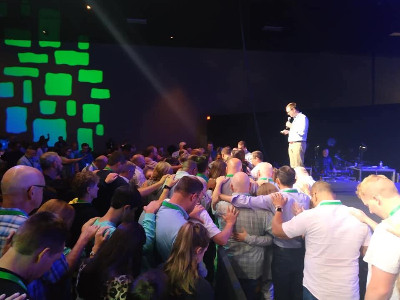 Commissioning of the Tatmans on Saturday, June 29.

But first, we gave God glory for what he’d already accomplished in and through the Church of God. What a celebration it was to hear Tapan Borman, national leader for the Church of God in Bangladesh, tell of the hundreds baptized, the thousands of children sheltered from harm, and the adherents to other religions converting to Christ! Funds sent to Bangladesh because of the generosity of Church of God people through Trafficklight fueled the work there that made it all possible. Then, to witness a check for $100,000 given to Cathy Turner of Hope Ranch for Women in Kansas, in support of their fight for freedom—what another moment of celebration that was!

The movement’s generosity was on display early Thursday morning, too, when the initial total raised for Pink Door (Berlin, Germany) was announced as nearly $2,500. Of course, these, by far, aren’t the only examples of God’s activity in recent years in the Church of God. A few others were celebrated, too, like the financial assistance granted to ministerial students through CARE, and aid given globally through Disaster Relief, as shared in the Pre-Convention elective that saw an unplanned change in leadership; one of the scheduled hosts ended up in the hospital. 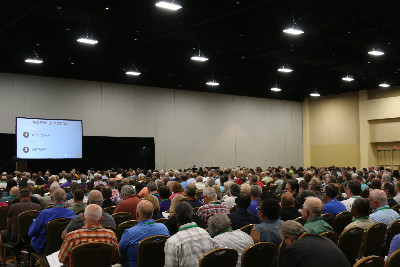 Prayer would play a potent role in Convention 2019 and General Assembly, as the scheduled prayer gathering on Thursday morning proved not enough for participants. Led by the Spirit, unscheduled daily prayer gatherings and walks continued, and one pastor formed a prayer group on social media specifically for Convention 2019 and General Assembly. How we rejoiced when news of answered prayers came, including, but not limited to, news that the conference host had returned from the hospital!

Prayer was also the banner of the evening on Saturday when Nate and Stacy Tatman were commissioned. Their home church in Auburn, Indiana (County Line Church of God), had been in the midst of what they call a “Matthew 9:38” prayer initiative, where the congregation was challenged to pray for workers to be sent into the harvest each evening at 9:38. While the Tatmans were on stage to be commissioned at Convention 2019, the alarm on Stacy’s phone went off. As Nate and Stacy were being commissioned, their home congregation was actively praying for workers to be sent into the harvest! The Tatmans’ work in Europe and the Middle East is expected to have far-reaching impact on the kingdom for years to come. 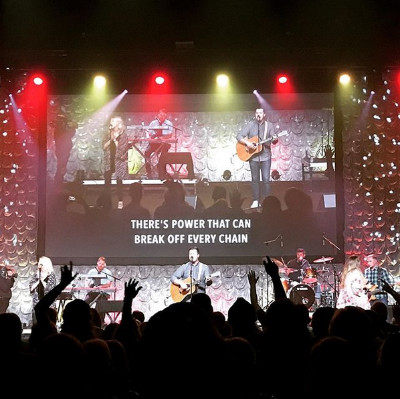 Other moments were just as pivotal: Servant Solutions’ Jeff Jenness passed the baton of leadership of the agency to Jim O’Bold. Children of Promises’ Paul Maxfield passed the baton to Mike and Heather Webb. Christian Women Connection announced the launch of Arise, a new ministry designed especially for women in ministry. Church of God Ministries announced a partnership with Faithlife, radically updating and enhancing the way the “base camp” office operates and communicates with the Church of God. KidzLIVE! and a convention hotel full of family-friendly amenities again changed the way the Church of God gathers. Diana Swoope, chair of the General Assembly, received three standing ovations in honor of her position that would be passed on to Timothy Clarke. A global forum of international guests convened to spark dialogue about creative ways the global Church of God can move forward together. Accompanied by several spoken affirmations, Jim Lyon received overwhelming support for a second term as general director. 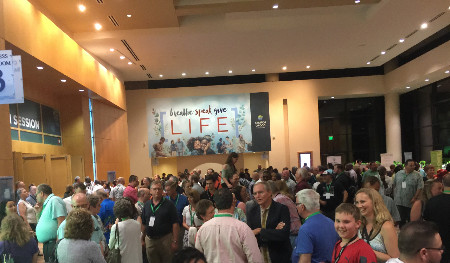 Crowd in “The Commons” area of the Convention hotel.

Bob Brooke reflects, “I came away full of God’s Spirit and more in love with Jesus.” Theresa Robertson exclaims, “I had the best time at Convention 2019. I can’t wait to live out what I learned!” Mike Parks concludes, “What a fantastic week it has been…thankful for the direction we are heading as a movement!”

It’s certainly not over, Church of God. Our time is now.

Regional Conventions have been announced for 2020: April 24–26, Inglewood, California; June 26–28, Anderson, Indiana; and September 18–20, Brooklyn, New York. The next Church of God Convention and General Assembly is scheduled for June 26–29, 2021, in Denver, Colorado. Stay tuned for more information and learn more about the Church of God at www.JesusIsTheSubject.org.