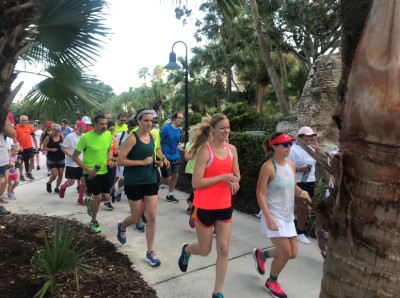 The Church of God was “on the move” at Convention 2019 on Thursday; the Pink Door 5K was only the start. Credit: Rebecca New-Edson.

While most of the guests of the sprawling Orlando World Center Marriott were still sleeping on Thursday morning, June 27, some were lacing their sneakers and lining up at dawn’s early light. From the blast of the air horn signaling the start of the Pink Door 5K, to the last prayer breathed with a pastor in response to the opening worship session, the Spirit was active and effective on Day One of Church of God Convention 2019. So were those moved by the Spirit, who raced from start to finish and trekked from bedroom to ballroom, all the while shedding calories and burdens amid engaging electives, powerful preaching, and refreshing reunions.

About 120 runners, joggers, and walkers had signed up for the Pink Door 5K prior to Thursday morning’s “fun run.” In spite of high humidity and scorching sunshine, women and men of all ages exercised their physical and spiritual muscle as they advocated for the fight against sex trafficking. Though some made it to the finish line before others, everyone came out winners as Global Strategy’s Andrew Gale announced they’d raised nearly $2,500 for Pink Door. Praise the Lord! 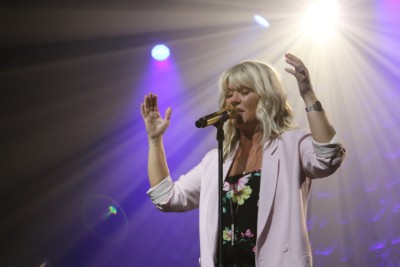 Throughout the day, God was on the move and so were his people. Pre-Convention electives highlighted God’s activity both at home and abroad. Though many pastors and laypeople had already arrived, others continued to check-in and crisscross the lobbies, hallways, and ballrooms, raising their heart rates and preparing their hearts for what God had in store. While some may have been in a hurry—the writer included—a crowd had gathered Thursday morning to slow down and seek God’s face on behalf of the entire Convention. Moved to do something bold and keep the prayer focus going, one pastor started a Facebook group devoted solely to prayer requests and reports of answered prayer during Convention 2019. Join the group at https://www.facebook.com/groups/358547328177711/. Answered prayers are already a reality!

As the Holy Spirit continues to be active and effective, indications are that other informal prayer gatherings are also forming.

At midday, a celebration service at nearby Solid Rock Community Church of God in Kissimmee, Florida, honored the life of one man who faithfully moved to the rhythm of the Spirit but went home to be with the Lord earlier this year. D. Dewayne “Reep” Repass served a season of ministry as an executive for Church of God Ministries, among various other God-ordained roles. His common refrain, “Better and better,” was a response to the standard conversation-starter, “How are you?” Moving—weaving—through dense Orlando-area traffic en route to the church from the World Center Marriott, Convention-goers were nevertheless committed to giving tribute to a life that epitomized Christ-centered leadership. A packed house at Solid Rock further underscored the broad scope of this “Jesus guy’s” influence. 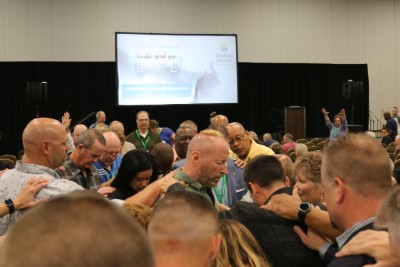 When the afternoon Town Hall with Jim Lyon was about halfway through, the Holy Spirit once again showed he, too, was on the move. A poignant, powerful, and unplanned moment, now etched in the minds of attendees, took shape when one of the Movement’s younger pastors took to heart the Town Hall’s theme—“Go Ahead, Ask Anything.” “May I pray for you, Jim, right now?” he asked. The expected flow of the session was interrupted as people rose from their seats to lay hands on the general director of Church of God Ministries. Then Jim returned the favor, and prayed for the young pastor.

As the Spirit moved among hearts again at the close of Thursday evening’s crowded session, worshipers moved forward to pray. Natalie Grant, award-winning Christian gospel artist, testified of healing from cancer and led a series of soul-stirring songs that moved fellow worshipers to their feet. She ended an evening of eloquent exhortations derived from Matthew 8’s account of Jesus cleansing a leper, expounded upon by Jim Lyon, with a song simply titled, “Clean.” Listeners young and old were reminded that the cleansing power of Christ is constantly available, giving life, and compelling Christians to give life to others.

Friday’s Convention lineup of activities include the first gatherings of the General Assembly and KidzLIVE!, as well as a variety of main sessions, conferences, and receptions. How will the Holy Spirit move on Friday? Let’s move with him and find out!

For Convention schedule and other details, visit www.chogconvention.org.