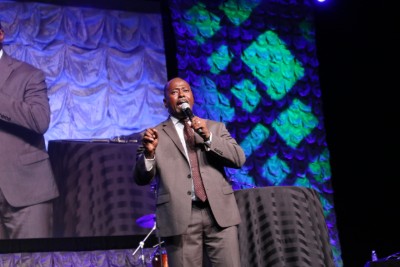 Nike coined the phrase but, as General Assembly chair Diana Swoope insisted on Sunday at Convention 2019 and General Assembly, the Bible said it first. Before Sunday’s schedule was in full swing, Church of God people in Orlando, Florida, were likely already on information overload. After multiple messages, plenary sessions, conferences, and workshops, no one could complain about a lack of great content. But as the morning hours unfolded on Sunday, June 30, the Spirit was leading us to do something with it. As was mentioned in the General Assembly, in the context of resolutions, “let’s not sleep on it.” In the worship session that followed and closed out Convention 2019, Harvey Carey affirmed the necessary step of application.

“Information is not the challenge for us,” Harvey explained. “Application is the challenge. We have been given, in order to give.”

Application requires doing something. Too often our doing something is delayed or altogether overlooked when we think about doing something so much that we never actually get around to doing it. Again, as Diana Swoope said on Sunday morning, “Just do it.”

In doing something with what we believe, our theology becomes transformative. We don’t retreat from the culture, but we help to shape it. We don’t take our cues from the culture, as Jim Lyon asserted in his general director’s report this year, but we take our cues from Jesus. So, echoing last year’s message to the Movement at the Columbus, Ohio, Regional Convention, Harvey used Jesus’ analogy of salt and light. “The salt has to leave the shaker,” Harvey pointed out, in order for it to be useful. Until it actually leaves the shaker, it’s useless. 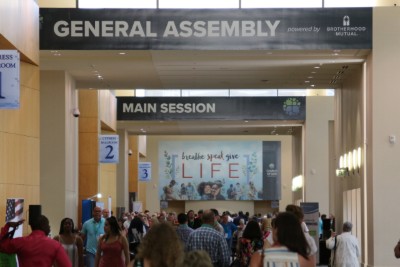 Crowds form in “The Commons” on Sunday between sessions.

Expounding upon 2 Corinthians 5, Harvey further pointed out that the job of reconciliation, which God has given to the church, is the church’s responsibility. He insisted that this responsibility is something we cannot abdicate to any other entity.” Of course, fear is one roadblock to fulfilling that responsibility to reconciliation, and the church must recognize its power over fear in the name of Jesus Christ. In other words, be bold. After all, Jesus is the subject! (and the whole sentence, in fact, as Diana Swoope added!)

“Church of God, let’s change the world in the name of Jesus!” Harvey Carey appropriately concluded.

God spoke to us on Sunday, God has spoken to us this week, and now it’s time to just do it. Christ’s love compels us.

Look for a full recap and conclusion to Church of God Convention 2019 and General Assembly later this week! To look back at pictures and what people are saying about Convention 2019, search #GiveLife2019 on Facebook, Twitter, and Instagram. Don’t forget to log on to Faithlife, too!