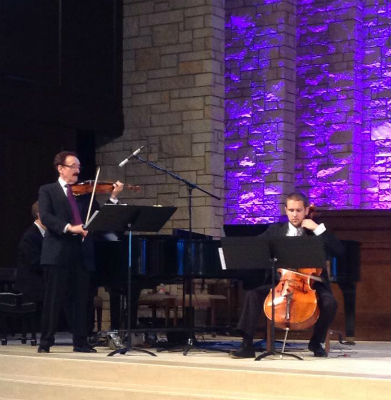 Church of God heritage is in his bones. Music flows in his veins. George R. Skramstad is third-generation Church of God and the product of a family steeped in classical, folk, and church music. He started playing piano at the age of three, and at the age of eleven he picked up the violin. Over the course of his ministry, he’s served several congregations, and led worship for many churches through seasons of incredible growth, including North Hills in Phoenix, Arizona; Crossings in Oklahoma City; and Central Community in Wichita, Kansas—the host church of CHOG Convention 2017. Today he serves as music and worship arts pastor at Central Community. In a recent interview with Church of God Ministries, Pastor George Skramstad shared some insights gleaned from his church, music, and family experiences, and offered a preview of how these influences will translate into his worship leadership at Church of God Convention 2017.

George’s grandparents were a part of the Church of God congregation in Milton-Freewater, Oregon. His parents raised him in the Moscow, Idaho, Church of God. Both Mom and Dad were connoisseurs of music, and took their children to every concert they could, whether classical, folk, or sacred music. Dad’s desire for his children to play piano and Mom’s ability to play some violin spilled over into young George’s life. But so did his children’s church teacher and a certain evocative painting. 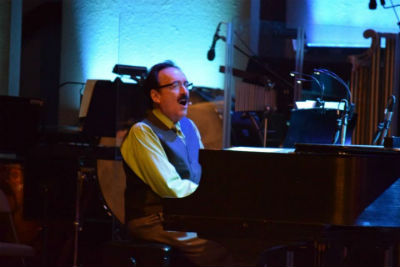 Photo: George leading from the piano at Central Community.

“Early in life, I recognized that music was part of God’s creation, and that it spoke to my inner being,” George recalls. “Our pastor’s wife, Winona Ogle, crafted worship services that took place in the basement of the church during ‘big church.’ It was there that she had a boy’s quartet, taught the one who was to give the prayer, and had me accompany the hymns and singing on the piano. She had children soloists, and sometimes we took turns preaching. It wasn’t long before we as children played church on the porch of the old farmhouse where we lived. I remember putting together worship services, and even the neighbor kids joined in with us for these rather impromptu services.”

“One other great influence,” he continues, “was a painting that hung over the old upright piano I practiced on for a dozen years. It was a print from a major painter of the crucifixion of Christ on the cross. Standing and leaning against the cross was his mother Mary, and the skies were a turbulent green and black with flashes of lighting flickering in the clouds. It was a Renaissance piece, and Christ had just died with rivulets of blood visible in the water running from the rocks and surrounding stones. From this painting, I would play music that, from the depths of my heart, depicted what I thought was the heart of Christ, the suffering, the loneliness, and the love.”

So, piano or violin? “Quite frankly, they both are about par with each other depending on what it is being called upon to accomplish,” George explains. “Piano works best in terms of leading and guiding worship for me. However, for special touches and intimate solo lines, the violin can talk in special ways that the piano cannot. They are equal in my mind, but am stronger on the keys.” George’s favorite songs for worship are “Immortal, Invisible, God Only Wise,” “In Christ Alone,” and “I Then Shall Live.” His favorite musical piece that ordinarily wouldn’t be heard in a worship service is Saint-Saëns’ “Organ Symphony.” 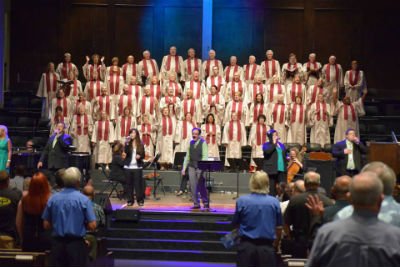 But it’s not just about the music for George. It’s about so much more. That’s why, for more than twenty years, George has been a part of a spiritual formation expression known as Renovaré. Richard Foster and his team had asked him to lead worship for their regional conference, and George was hooked. “At that time, spiritual formation was a new concept for many believers, and the need for the church to gain understanding as to how that process takes place was something I wanted to help spread.” 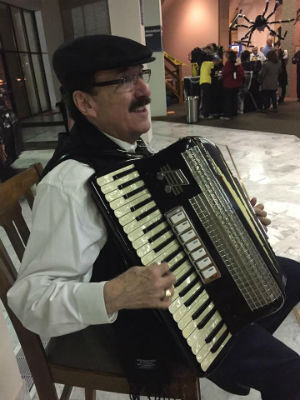 Photo: Once a year for the fall festival, George brings out the accordion!

As a veteran worship minister, George was asked to offer some encouragement to aspiring worship leaders in the Church of God. He responded, “We have to get over ourselves so that we can be all about God. It isn’t about us, but about what God has done in us and desires to do through us. In other words, as Dallas Willard has said, ‘What would Jesus be if he were me?’ Once we get past ourselves, we have to know our craft and niche of worship so well that we can worship along with those we prompt in worship without worry. I believe that there is nothing more fulfilling than to know that we have ‘touched the hem of Christ’s garment’ as the people of God. Mistakes don’t define us. Rather, it is the glory of God on our faces and from hearts that have been changed that make us real. Make sure you have people who pray for you. Be encouraged, be creative, have fun, and be authentic!”

What can people expect from Pastor George Skramstad’s worship leadership at Convention 2017 in Wichita? “We will have our worship team, choir, and full orchestra to prompt and support us as together we celebrate the work of Christ in our lives, in our movement, and in our call to change the world,” George concludes. “I look forward to hearing the sound of God’s people united in praise, thanksgiving, worship, confession, prayer, hearing the spoken Word, and commitment.”

Register for Church of God Convention 2017 at www.chogconvention.org.