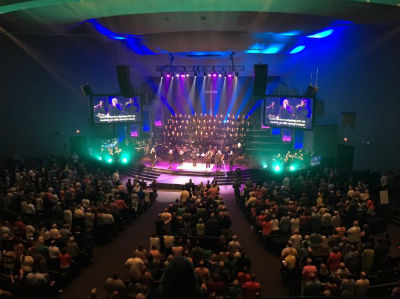 Just in case anyone had forgotten, Thursday at Church of God Convention 2017 was a reminder to everyone that an anointed woman of God cannot be discounted. On June 22, the Church of God Convention featured not one, not two, but three different women leaders who have had an extensive impact on the church and culture around us. Ann Smith, Anita Renfroe, and Danielle Strickland offered messages oozing with wisdom, wit, and, in Anita Renfroe’s case, sheer hilarity, too. It was the women—not the men—who led the way on Thursday.

Though she has every right, Ann Smith would never brag about her list of accomplishments or display her portfolio of lives forever touched in Jesus’ name. Humble, loving, and genuinely caring, the former Church of God missionary has become mentor to many, friend to all. In her nineties, and not ashamed to talk about it, this source of encouragement and profound insight sat down for a living-room-style conversation with the congregation. “Live with expectancy, not expectations,” she said. “It’s not our weaknesses and failures that hinder the kingdom, but our lack of admitting we have them,” she insisted. With vulnerability and a close-up view of her own struggles, she posed the question, “What would happen if you used the energy for the kingdom that you use for hiding?” Few left the sanctuary with dry eyes after former missionary David Reames joined Jim Lyon on the platform for a prayer of thanksgiving for the gift Ann Smith has been, and continues to be, to the movement. 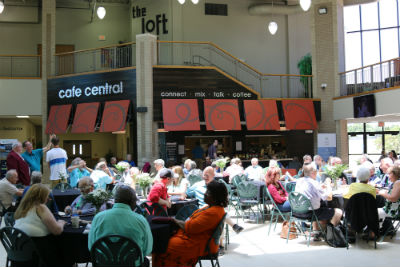 Photo: Fellowship in the Atrium at Central Community Church.

Recovering from Robert’s Rules of Order wasn’t too hard on Thursday afternoon, thanks to the clever comedy of Anita Renfroe. A minister in her own right, she communicates the joy of the gospel as humor disarms the fortified soul. Routinely poking fun at Church of God Ministries general director Jim Lyon, Anita Renfroe’s quips relaxed remaining muscle tension leftover from the morning General Assembly session and readied the masses for an evening of heavenly worship and the Word.

The Tuesday evening and Wednesday evening services were exceptional. How could it get any better? But many would say Thursday night, in fact, surpassed every previous session. Could it have been the amazingly talented choir, orchestra, and ensemble? Could it have been the powerful moving of the Holy Spirit as missionaries—both international and domestic—were commissioned? Perhaps it was the way Danielle Strickland of the Salvation Army pulled listeners into her stories, inspiring them to take bold action. Once again, the front of the sanctuary filled with men and women, driven to their knees, ready to obey the Lord at any cost. 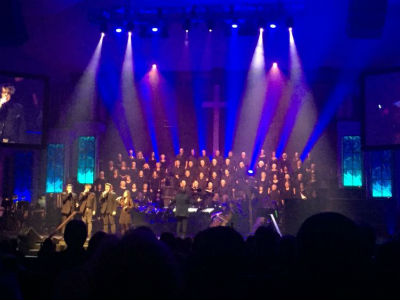 Silence swept across the sanctuary after Jim Lyon closed the session in prayer. As convention-goers trickled back into the lobby, they carried the words of Danielle Strickland with them. “We need a willingness to surrender, to go, to obey—before we understand it, before we ‘get it.’” Not easy, but often such a readiness is required for kingdom living. Sometimes, so is being confused and disturbed!

“Faith only makes sense in reverse,” she explained. “You need a God-sized revelation!” If we need to be disturbed to take action against human trafficking, or any other human scourge, then bring on that which is disturbing! Learn more about Trafficklight 2.0 at www.chogtrafficklight.org and experience the rollout at today’s Freedom Summit in Wichita.

Don’t forget to stop by the registration desk in the Atrium at Central Community Church before the convention’s end to save 20 percent on registration for any of the 2018 Regional Conventions! See the program book for more information: https://www.jesusisthesubject.org/wp-content/uploads/2017/06/2017_chog_convention_program-guide-web.pdf.