By chogministries
Posted May 24, 2013
In All Church of God
Congregation Hosts Field of Flags through Memorial Day2013-05-242013-05-24https://www.jesusisthesubject.org/wp-content/uploads/2016/07/ChogLogo-Light.svgChurch of God Ministrieshttps://www.jesusisthesubject.org/wp-content/uploads/2016/07/ChogLogo-Light.svg200px200px 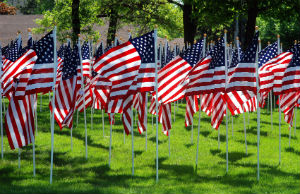 On Oct. 21, 2006, 22-year-old Nicholas Manoukian lost his life in Iraq. Three years earlier, Damian Bushart, who would have been 32 on Memorial Day this year, lost his life during Iraqi Freedom.

The parents of both young soldiers traveled from northern Oakland County Saturday to hear their sons’ names read among the 226 Michigan residents who were remembered at the Field of Flags on the front lawn of the Farmington Hills Church of God on Power Road [in Farmington, Michigan].

“You accept it and you carry on,” said Bushart’s father, Skip, about the death of his son.

Bushart is the president of the Fallen Heroes Memorial Foundation, which is building 31 memorials throughout the state.

Mary Manoukian Calhoun said her son, Nicholas, joined the military because he wanted to one day tell his grandchildren that he served his country. He was killed during his second deployment in Iraq.

“There is a story behind every flag here,” Manoukian Calhoun said.

And that’s the reason for the traveling display, The Field of Flags, that arrived at the Church of God May 3. On the lawn, the 6,600 flags each represent a service man or woman killed in Iraq or Afghanistan.

Now less than a week after the display arrived, church members and volunteers will already have to plant additional flags representing soldiers from Michigan who were recently killed in Iraq or Afghanistan.

The Field of Flags will remain at the Church of God until a 7 p.m. closing ceremony on Memorial Day, May 27.

The well-attended opening ceremony Saturday began with music by the Metro Detroit Police & Fire Pipes & Drums, followed by the posting of colors by members of the Michigan Veterans Foundation.

While guests stood in honor and remembrance of Americans who lost their lives in service to their country, the pledge of allegiance was led by members of the Novi Parkview Daisy Troop No. 70053, Parkview Brownie Troop No. 70904 and Cub Scout Pack No. 279.

“Today, we have come to honor your loved ones and their service,” said the Rev. Gordon Steinke of the Church of God. “You have sacrificed greatly.”

As visitors and family members gathered to celebrate the loss and the lives of the soldiers, Steinke urged all to pray for peace. “We are talking about lives, many lives,” he said.

The Field of Flags, Steinke told the audience, is a poignant exhibit that makes a statement of pain and hope and the human cost of war.

“The pain is real and deep,” Steinke added.

Carron Odokara, associate pastor, urged families to hold on to the memories of their fallen family members. “God bless the families who have given more than we can imagine.”

As the fallen soldiers were honored and remembered, Steinke told the audience that the church is hosting the Field of Flags to pay tribute to the spirit of hope. In doing so, Steinke said, church members:

• Honor all who have served their country.

• Sacrifice to love others.

“We do this without emphasis on politics or a specific religion,” Steinke said.

Lt. Matthew Duncan, who recently returned from a tour of duty in Afghanistan, thanked families for their sacrifices. “There’s no way to put it into words. But they (American soldiers) are the greatest people who have walked this earth.”

The ceremony ended with Amazing Grace by the Metro Detroit Police & Fire Pipes & Drums, Taps and a gun salute by the Berkley VFW.

This article was originally published on May 9, 2013 by The Observer & Eccentric. Republished by permission of O&E Media. For more information on the Field of Flags event at Farmington Hills Church of God, visit http://fhchurchofgod.org/fieldofflags.htm.