By chogministries
Posted May 17, 2013
In All Church of God, Colleges & Universities
Concert to Feature Patty, Gaithers, McLaughlin and More AU Music Alumni on Sept. 222013-05-172013-05-17https://www.jesusisthesubject.org/wp-content/uploads/2016/07/ChogLogo-Light.svgChurch of God Ministrieshttps://www.jesusisthesubject.org/wp-content/uploads/2016/07/ChogLogo-Light.svg200px200px 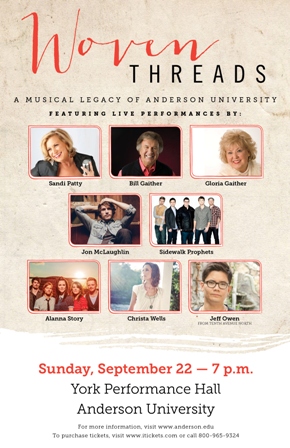 Anderson University alumna and renowned award-winning Christian recording artist, Sandi Patty, will host a special concert of several musically accomplished AU alumni on Sept. 22 at 7 p.m. in the York Performance Hall on the Anderson University campus for the benefit her alma mater. Patty will be among an amazing list of performers for a live performance featuring legendary gospel artists, Bill and Gloria Gaither and pop rock singer-songwriter, Jon McLaughlin. Also taking the stage will be Dove Award-winning Christian band Sidewalk Prophets, as well as Jeff Owen, lead guitarist of Tenth Avenue North. Dove Award-winning songwriter Christa Wells will join this impressive list of artists as well as singer-songwriters Ally and Anna Long of the Christian band Alanna Story. Tickets may be purchased through iTickets at: http://www.itickets.com/events/305856.html.

“Anderson University has made a huge impact on my life for the good,” said Sandi Patty. “When the university asked me to be involved in this event, it got me thinking about all the stories and lives I know who have been influenced through AU. My parents both graduated from AU and many of my children have had great experiences at AU. When I think about my own growth as a student – musically, intellectually, and spiritually – I can’t help but be overwhelmed with gratitude toward all the people that make AU what it is today.

Entitled “Woven Threads,” the concert will bring together some of AU’s most well-known alumni musical talent to support the university where each developed their talent and where each began their careers. This amazing collection of performers and artists will be supported by faculty musicians from the School of Music, Theatre, and Dance at Anderson University. “Woven Threads” will feature many familiar songs specifically selected by Patty herself and performed live through a unique acoustic setting. Music performed during the concert will be uniquely arranged and presented by each artist and featured on a special live recording by the same name for future release.

“When I was a student, I remember the music department being located down in the basement of Park Place Church of God,” added Patty. “I also remember seeing the current Fine Arts building constructed and finished, and what an amazing growth opportunity that became for students across the country to learn about music and God in that great facility. Now that I’ve seen the beautiful acoustic space that is the York Performance Hall, I am more excited than ever to perform at my alma mater with so many world class musicians. Many of my friends who are changing lives through music will tell you the same thing. As I’ve talked with Bill & Gloria, Jon, Dave & Ben, Jeff, Christa, Ally & Anna about giving back to AU through this event, they’ve all said the same thing: Anderson University was life-changing and affirming to each of us in unique ways, and we are honored to perform in this beautiful new hall to honor God and this place.”

About Sandi Patty:
Sandi Patty has won 40 Dove Awards, five Grammy Awards, four Billboard Music Awards and became a Gospel Music Hall of Fame inductee in 2004. Her albums have sold more than 11 million units, garnering her three platinum and five gold recordings. As the most-awarded female vocalist in contemporary Christian music history, her voice is still the gold standard by which all who follow are measured. For more information, visit: www.sandipatty.com.

About Bill and Gloria Gaither:
Gospel music legends Bill and Gloria Gaither began their relationship with Anderson University as students. After their college days, they launched successful careers in music ministry. The Gaithers have collaborated on hundreds of popular gospel songs, winning many Grammy Awards and Dove Awards from The Gospel Music Association (GMA). They have earned the title of the GMA’s “Songwriter of the Year” eight times. In the year 2000, Bill and Gloria were named “Songwriters of the Century” by ASCAP (American Society of Composers Authors, Publishers. For more information, visit: www.gaither.com.

About Jon McLaughlin:
Jon McLaughlin has sold more than 170 thousand albums and more than 1 million digital tracks. McLaughlin released his 2007 debut album Indiana, followed by OK Now in 2008. The albums yielded placements on the TV Series Scrubs and movies including Georgia Rule and Bridge to Terabithia. Jon’s most recent album Promising Promises was released last year and includes his latest single “Summer Is Over” featuring Sara Bareilles. For more information, visit: www.jonmcl.com.

About Sidewalk Prophets:
Sidewalk Prophets is a contemporary Christian band from Nashville, Tenn. Their album These Simple Truths contained the single “The Words I Would Say,” which is also featured on WOW Hits 2010 and WOW Hits 2011. The group has won the 2010 GMA Dove Award for “New Artist of the Year.” The band has toured in the Rock and Worship Roadshow with MercyMe and Francesca Battistelli, among others. For more information, visit: www.sidewalkprophets.com.

About Jeff Owen:
Jeff Owen is the lead guitarist for Tenth Avenue North, a contemporary Christian band from West Palm Beach, Fla. The band has toured with David Crowder Band, Casting Crowns and MercyMe and headlines their own dates throughout the U.S. They won the “New Artist of the Year” award at the 40th GMA Dove Awards in April 2009. The band’s song “By Your Side” won the GMA Dove Award for Song of the Year in 2010. For more information, visit: www.tenthavenuenorth.com.

About Christa Wells:
Known for the past several years for her poignant, poetic and honest songwriting, Christa Wells is finding her own place as a performing artist. Christa has written with numerous Nashville artists and had songs cut by artists such as Plumb, Point of Grace, Sara Groves, Selah, and Natalie Grant. Several have been hit singles, including most notably “Held” recorded by Natalie Grant, which received airplay in both Christian and mainstream markets and earned her the GMA “Songwriter of the Year” award in 2006. For more information, visit: www.christawellsmusic.com.

About Alanna Story:
Born in Bellingham, Wash., into a family with a deep faith and musical heritage, Ally and Anna Long were captivated by the musical arts from an early age. In 2009, Alanna Story released an 8-song EP entitled “Keep Breathing.” The sisters—along with band members Stephen West (guitar), Joel Burkhead (bass), and Ben Hodge (drums) came back in 2012 with a with a 9-song EP called “Flickering Spark.” Both projects have earned high praise from music critics and listeners alike. For more information, visit: www.alannastory.com.