Compelled by Christ to Curb Sex Trafficking in Honduras

By chogministries
Posted August 26, 2014
In All Church of God, CHOG TraffickLight
Compelled by Christ to Curb Sex Trafficking in Honduras2014-08-262020-02-29https://www.jesusisthesubject.org/wp-content/uploads/2016/07/ChogLogo-Light.svgChurch of God Ministrieshttps://www.jesusisthesubject.org/wp-content/uploads/2016/07/ChogLogo-Light.svg200px200px 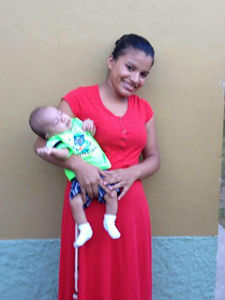 Photo: Anahi with her newborn.

When he saw her smile, Keith Barker knew that God was changing Anahi’s life.

Anahi had not smiled once in all her months at Compelled by Christ Children’s Home. But then, life had not given Anahi many reasons to smile. Her father started raping her when she was just a little girl. This is a horrible fate shared by many little girls in Honduras. When she became pregnant, her father kicked her down a set of stairs and she lost the baby.

One day Anahi’s father told her to put on her one pretty dress and meet him in front of their home. The fourteen-year-old girl dressed excitedly, thinking she would be taken somewhere special. When she stepped into the front yard however, her father handed her over, in her pretty dress, to four men. Her father had sold her into prostitution.

Anahi spent several months as a prisoner, was forced to have sex with multiple men every day, and was chained to her bed in a small room at night.

Somehow in the midst of all that hell, she managed to look up to heaven and pray. Anahi tells the missionaries who visit Compelled by Christ that one night, as she was praying, the handcuffs that chained her to the metal bed frame just slid off. She saw a light fill her room and she escaped into the streets of San 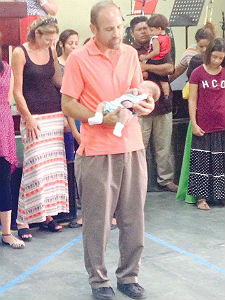 Pedro Sula. With the help of a concerned passerby, she arrived at the offices of the local government agency for orphans.

Normally Anahi would have been placed in a home for girls. However, just a few months prior, the director of INFHA had met two U.S. citizens from HighPoint Church of God in Lake Wales, Florida. Keith and Bonnie Barker had been making missions trips to the nation of Honduras since 2005, but in 2011, during a visit to a government-run orphanage, God had laid a burden on Keith’s heart. This burden was to start a children’s home in the nation of Honduras that would partner with local churches and believers to show the love of Christ to these abandoned and forgotten children.

So in 2011, Compelled by Christ Children’s Home was formed with the support of their HighPoint Church of God family, as well as many friends and believers across the country.

Like most people who walk with the Lord, the Barkers learned that Christ tends to reveal life’s journey one step at a time. By 2013, Compelled by Christ was home to fourteen girls—including Anahi—all of whom had been rescued from some form of sex trafficking. None of them are older than seventeen. A few of them, like Anahi, have shown up pregnant as a result of the rapes they have suffered. Not only is Compelled by Christ ministering to the girls (providing schooling and job training, and connecting them to HighPoint’s sister church, Centro Cristiana de la Roca Church in Choloma, Honduras), but they are also the place where two babies have been born. These babies are born bathed in prayer that God will break the generational curses and wickedness that their mothers have suffered.

The church in Choloma, the Barkers, HighPoint Church, and supporters all over the country pray and give and work to see the Holy Spirit regain ground in these little girls’ broken hearts one painful inch at a time. Sometimes the gains are obvious, such as the time when seven of the girls were saved and baptized at Centro Cristiana Church. But sometimes the victories are subtler.

For instance, the day Anahi was taking her turn preparing dinner: She and a friend convinced Keith to take a bite of the pit of a mango. He had the predictable, gag-reflex, reaction to the bitterness and bent over the wastebasket to spit it out. When he turned to face the pranksters, one of the girls was laughing hysterically. But Anahi smiled.

“Tasting that pit was well worth it,” Keith said, “Anahi never smiles.”

The Psalmist wrote, “When the Lord brought back the captives…our mouths were filled with laughter, our tongues with songs of joy” (Psalm 126:2 NIV1984). Anahi’s wasn’t a full-blown laugh, but it was a smile, and that is proof enough that God is able to heal even the most broken and shine light in the darkest places.

If you would like to learn more about Compelled By Christ, visit their website and read Keith’s blog at www.compelledbychrist.com.

Jack Hilligoss is the lead pastor of HighPoint Church of God in Lake Wales, Florida. For more information on the Church of God response to the epidemic of sex trafficking, visit www.JesusIsTheSubject.org/CHOG-TraffickLight.