Combined Efforts Lead Egypt Church Out from Under Rickety Rooftop

By chogministries
Posted October 26, 2016
In All Church of God, Global Strategy
Combined Efforts Lead Egypt Church Out from Under Rickety Rooftop2016-10-262016-10-26https://www.jesusisthesubject.org/wp-content/uploads/2016/07/ChogLogo-Light.svgChurch of God Ministrieshttps://www.jesusisthesubject.org/wp-content/uploads/2016/07/ChogLogo-Light.svg200px200px 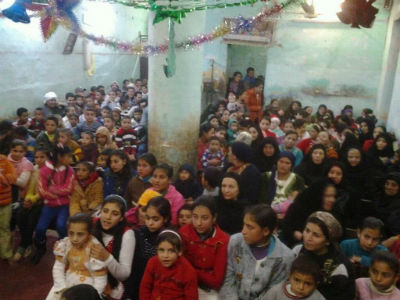 Photo: The El Dara congregation crowded into their old building.

Things are changing for the better in Egypt. Recent legislation has relaxed laws that formerly constricted the ability of churches to build or renovate. The only legal religions in Egypt—Islam, Judaism, and Christianity—maintain a unique coexistence, even as only 10 percent of the country profess Christ. Intending to promote peace among all three, the government made a practice of assessing the majority population in the area surrounding a building project of a religious entity—would such a building bring conflict or disrupt the peace in any way? Now that regulative barriers have been removed, the Church of God in Egypt is hopeful that much-needed renovation can take place with several church facilities, and that multiplication can take place with future church planting.

The El Dara congregation could really use a safer place to meet. “The former building was literally falling apart, and the open roof that used to accommodate a small group, while others met in the ground floor sanctuary, could barely support its own weight,” Global Strategy representative Ken Oldham explains. “The new building will offer sanctuary space, a floor dedicated to fellowship or teaching space, and a rooftop that can be used throughout most of the year in our mild climate.” The added benefit of the new building is that it provides a living space for the pastor’s family, which now lives in a small apartment. Before the pastor was married, he lived in the old church’s one-room rooftop apartment—only about eight by ten feet. Can you imagine?

The new building will not only function as a lighthouse in the community for the gospel it spreads, but it also stands out with its cathedral-like appearance in a relatively plain-looking, rural area. The church hopes to resume its tutoring ministry in the new facility and do even more for the community. What the church is doing and will be able to do as a result of a completed new building is not the only hopeful part of this story. How they got to this point is equally encouraging. 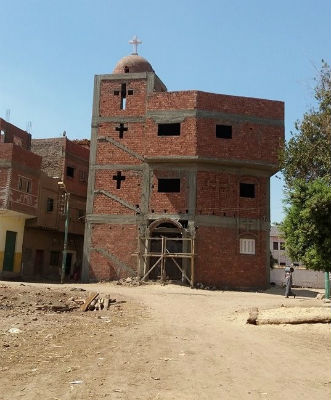 Photo: The new building under construction.

To this point, each of the eleven other Church of God congregations in Egypt have contributed to this project. In fact, over half of the total amount of the project has been raised by the other churches as they have considered the needs of this one church above their own. “The unity of the Egyptian Church of God is truly inspiring,” Ken reflects. “Though there are twelve congregations, and twelve pastors, there is no competition, jealousy, or attempt to do bigger/better than the other; they sincerely rejoice when one rejoices, and mourns when one mourns…perhaps this is a ‘benefit’ of being the minority religion and having endured periods of persecution. There is no room for attitudes that claim what is mine or yours. When the opportunity presents itself, all must join together to act before the moment is lost.”

Beyond Egypt, the Spirit has been at work to bringing the people of God together to accomplish what just wouldn’t happen alone. In 2015, at the European Theological Conference, hosted by the German Church of God, two congregations were convicted to get to know their Middle Eastern brothers and sisters better. Confessing their previous lack of commitment to inter-connectivity, they were divinely prompted to visit Egypt. Soon the two churches from the United Kingdom knew they had to invest in the renovation of the El Dara congregation to a better meeting place. The U.K. congregations gave an offering of $11,000 to the El Dara renovation!

“The conviction and commitment of the U.K. pastors alone is very encouraging for our Three Worlds Team, who have made it a priority goal to create inner-connectivity within and among the countries of the region,” Ken explains. “The encouragement continues in their request to have us help facilitate that interaction, demonstrating a level of trust in our leadership. And the encouragement is further magnified by their example to the other pastors and countries in the region, whom we hope will also be inspired to do the same.”

You can partner with the El Dara congregation, too. Go to the Egypt Church Planting and Leader Development project under the Egypt header at http://chogglobal.org/giving-opportunities-europe-middle-east/ to contribute to this exciting new project. Donations can also be mailed to Church of God Ministries, PO Box 2420, Anderson, IN 46018; please note that your gift is for Project 42.30170. Learn more about Project Link at http://chogglobal.org/projects/.