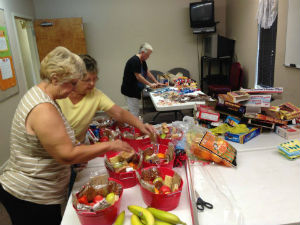 Just about everyone over the age of eighteen can remember exactly where they were and what they were doing when the first plane struck the North Tower of the World Trade Center in New York City. Thirteen years ago, September 11 left horrifying images of evil and chaos seared into our minds. Though the damage done cannot be erased, God has turned much of what was meant for evil into good. Churches and communities across the country responded to the attacks in ways that speak of the unquenchable hope found only in Christ. The first-responders to the scene have since been hailed as heroes, and rightly so. Since 9-11, one church that has intentionally reached out to honor and encourage local heroes is First Church of God in Danville, Kentucky.

Throughout the years since September 11, First Church of God has taken deliberate steps to show local law enforcement, leaders, and authorities that they care. In the past few years, the Christian Women Connection group at First Church has taken the reigns of the ministry to package and deliver gift bags to area fire departments, the police station, the Sheriff’s office, and more. First responders don’t always get the honor they’re due, but in September, those in the Danville area were the surprised recipients of a blessing. 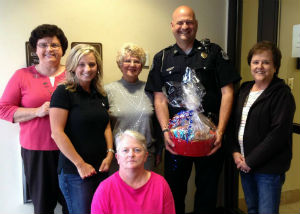 Lois Pike, administrative assistant of First Church—and member of the CWC ministry—explains that the ladies took charge of the project again this year, but they were sure to garner the support of the entire congregation. “We got the word out to our ladies,” she explains, “and I did a sign-up sheet with an announcement asking people to bring snacks for the baskets. The church responded well with fruit and other snacks and monetary donations. We took the baskets out on Friday evening, and the recipients were just very, very thankful to be remembered. We were also able to take pizza to the main fire station and 911 call center.”

Lois recalls that when the crew made a stop at the 911 call center last year, one employee was particularly impressed. She indicated to the team from First Church that while various organizations occasionally distribute gift baskets, most overlook the emergency call centers. This September, First Church made 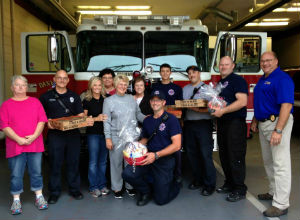 sure they didn’t forget to return. Then after stopping at a fire station, they realized they’d left just in time and were reminded why expressing appreciation to first-responders is so important. “If you could have seen those smiles on the faces of the firemen!” Lois exclaims. “And just to think—only thirty minutes after that, there was a really bad accident out on the road and these men had to rush back into harm’s way. I really think we were able to help them along that night.”

First Church of God knows that connection with the community around them is key to living out the life that Jesus exemplified. “We’ve been a church for many years that has reached beyond our walls,” Lois explains, “We want them to know that we care. And if they’re not saved, we hope that they would see the hands and feet of Christ.” First-responders throughout the Danville area surely saw the hands and feet of Christ that night.

Learn more about the Church of God, and how you can help change the world, at www.JesusIsTheSubject.org.