By chogministries
Posted September 17, 2015
In All Church of God, Southeast
Church on the Battlefield—Literally2015-09-172020-02-29https://www.jesusisthesubject.org/wp-content/uploads/2016/07/ChogLogo-Light.svgChurch of God Ministrieshttps://www.jesusisthesubject.org/wp-content/uploads/2016/07/ChogLogo-Light.svg200px200px 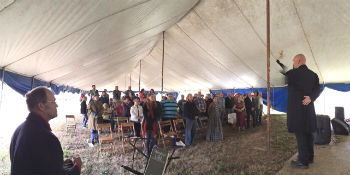 On September 13, 2015, Prestonsburg Church of God was blessed with a unique opportunity to hold “Church on the Battlefield” during a three-day Civil War re-enactment of the Battle of Middle Creek. Living history intermingled with the contemporary as Pastor Jason Johnson led the congregation, and God revealed just how similar our current difficulties are with those of our war-torn nation of the distant past.

Historically speaking, the actual Battle of Middle Creek took place on January 10, 1862. Almost five thousand men took part in this battle, representing both the Union and Confederate sides equally. Kentucky was a border state during the war, and was very much the embodiment of the iconic visual of family members fighting against one another—father against son, brother against brother. The spirit of division had ripped them apart.

The re-enactment of this battle has been occurring for well over a decade, drawing approximately seventy re-enactors from as far south as South Carolina and Alabama, and educating about six hundred viewers of the battle per day. The church service is always held on the final day, and is open to the re-enactors wearing their period clothing, as well as to any community worshipers that would like to participate.

The Sunday morning service began with Bruce Austin of Prestonsburg Church of God—a veteran re-enactor—blowing the “church call” on his bugle. During the war, this unique call was also used during the battle as a signal for peace negotiation. Pastor Jason, along with the praise team, donned historically accurate attire as the mixed congregation sang period-appropriate songs and shared their requests for prayer, leading up to the message.

Pastor Jason’s sermon first focused on the value of history, and then specifically discussed how both the Union and Confederate sides not only believed so strongly in their “rightness” that they were willing to die for it, but also that both factions firmly believed that their stance was biblically supported. The division that ripped apart the country in a very physical sense also spiritually divided believers in Christ.

This spiritual division was the opposite of what Jesus wanted. He specifically prayed for unity of the church in John 17, reminding his followers that we are to be one with the Father, just as we are with him. The only way this spiritual unity can occur is to follow his example of love. Even when we were at odds with him as sinners, he still loved us enough to be willing to die for us. What a powerful example of love-driven unity triumphing over division!

As the message was wrapping up, and those in attendance were reminded that the souls of people were vastly more important than our differences, it was not difficult to see how this lesson is fully applicable to the current state of relations in our country. Showing grace has never meant that you agree with a person or their actions fully, but instead that they are valued and cherished as a person—regardless of any ways they may be at odds with you.

Pastor Jason quoted Abraham Lincoln, saying “My concern is not whether God is on our side; my greatest concern is to be on God’s side, for God is always right.” That resounding message, received in the midst of the evidence and memory of a terrible battle, is the perfect reminder to seek unity, to keep Jesus as the subject in our minds and in our hearts. Perhaps then  God’s church can help to heal the division growing around us.