Church Offers Compassion and Care in the Bitter Cold

By chogministries
Posted March 27, 2021
In All Church of God, Change the Story, CHOG, Great Lakes
Church Offers Compassion and Care in the Bitter Cold2021-03-272021-03-26https://www.jesusisthesubject.org/wp-content/uploads/2016/07/ChogLogo-Light.svgChurch of God Ministrieshttps://www.jesusisthesubject.org/wp-content/uploads/2021/03/main_street_anderson_winter_scene.jpg200px200px

When that well-publicized winter storm caught Texas utilities off guard in mid-February, stranding millions without heat and water for days, Indiana had already been struggling with its most challenging winter in years. As frigid air and above-average snowfall moved in, some nonprofit organizations jumped into action to protect the vulnerable—the homeless.

Main Street Church of God in Anderson geared up the first week of the month and turned their fellowship hall into a warming center, opening February 7 just as the state started a two-week-long streak of days with sub-freezing high temperatures. About six inches of new snow also fell that weekend, on top of smaller snowfall amounts from earlier.

Anderson’s homeless shelter, The Christian Center, would not be able to take in all who might need protection from the elements, so Main Street mobilized when the extent of the coming storm became clear. 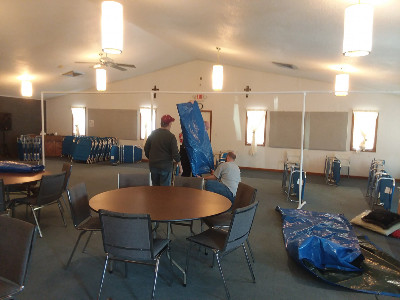 Volunteers set up for a previous warming shelter.

“We had done daytime warming centers several times over the years,” senior pastor Don Billey said. “Emergency response is not new to us,” he added, noting that the church also opened its doors for a four-day stretch of very cold weather two years ago and helped two dozen people with food, warmth, a cot, and clothing needs.

This time, the temporary shelter stayed open for two weeks. “We had some people who came inside for meals and some that dropped in to get warm,” Billey said. In addition, two women stayed overnight for almost two weeks, and up to nine men per night took shelter overnight.

More people could have been helped were it not for pandemic restrictions. The church set up only eleven spots for cots this year and added more distance between seating in socializing areas and at meal times.

Getting the word out was a community effort.

“A local firefighter who is very involved with the homeless population ‘advertised’ that we were opening,” Pastor Billey said. “Hospitals spread the word that we were open. Police brought the last two guys in that they had found suffering from the bitter cold. 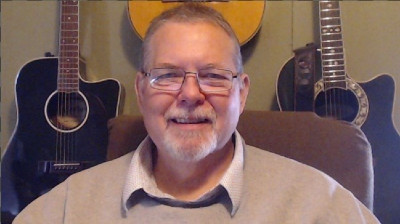 This project has not had much financial cost for the church because of how the community and the congregation have stepped up. The cots were donated by Community Hospital Anderson, and a nearby laundromat offered to clean clothes. A fitness center allowed the men and women to use the showers. Also, businesses donated food and snacks, and members of the general public brought things like hot pizza. That included a surprising gift on February 10 from one Anderson resident named Mike.

“I’ll confess, I teared up just a bit,” Don Billey said in a church Facebook post about Mike. “Here’s a guy who, almost exactly two years ago, was living anywhere he could find to throw down cardboard, a blanket, or a sleeping bag—dumpsters, doorways, abandoned homes, and ‘homeless camps.’ Today, he’s living in an apartment and reaching out to help those who are living as he did then—and bringing not only food and supplies, but also a message of hope.”

Not only that, but Mike walked several miles to get there because the snow was too deep for him to ride his bicycle. “That’s the story right there, how the community works together in times of need,” Billey said.

Main Street Church of God began preparing for this role several years ago when leaders went through training offered by Red Cross, by Southern Baptist shelter management, and from local emergency services. The church is a member of COAD, Community Organizations Active in Disaster. It’s kingdom work—“showing people God’s love.” “We have prayer before meals and did devotional times. Our men’s group did breakfast there instead of at a restaurant, but there also was a lot of talking one-on-one.” 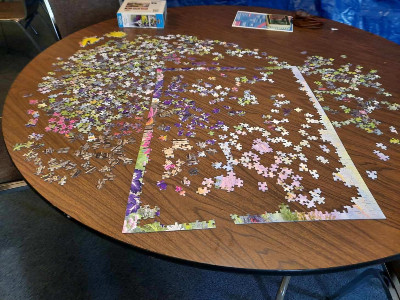 Some guests of the warming shelter enjoyed putting puzzles together while they stayed warm.

“There are four people who are alive because of this ministry,” Billey said. “For example, one guy had severe pain and cramping. He kept getting worse and worse and was taken to the ER. Found a life-threatening infection. One girl was in the first steps of hypothermia, with frozen fingers and toes and crying from the pain in her nerve endings.”

“Four of the people we housed are now in rehab, getting their addictions under control,” Billey said. “Because the warming center was open two weeks this time, they weren’t using, and it gave them a chance to start fresh.”

“I don’t care if they’re impaired when they come in, but they’re not going to ‘use’ while they are here,” he added.

Now that spring is here, Main Street looks ahead for next time. “We have a women’s group that, through the year, gathers hats, gloves, socks, coats, and other clothing.”

Those items will come in handy to help in the future when temperatures drop. 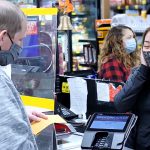 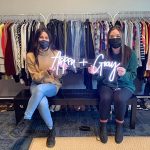