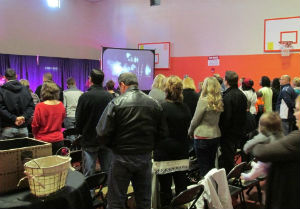 The response to the new Church of God parachute plant in northwest Indiana has been overwhelmingly positive. Pastor Charlie Arms and family moved to the Chicago suburb of Crown Point to start a church that would effectively communicate Jesus to a fast-paced, busy urban culture. In November, Momentum Church launched at the local YMCA and is already gearing up for a baptism service in January. Charlie and his wife Rebecca are thrilled for the opportunity God has given them in Crown Point. Starting a church from the ground up was the farthest thing from their minds, however, for these two whose previous church experience once turned them away from the faith.

Rebecca attended church as a child, but Charlie didn’t grow up in church at all. Both wandered in the wilderness for several years looking for a source of water that wasn’t merely a mirage. “Our perception of church was that it was old, irrelevant, boring, and stuffy,” Charlie explains. On the church’s website, Charlie goes on to emphasize that it was not a church building or fancy program that drew them to Christ. Believers who boldly reached out to them with more than a trite hello made all the difference. “Most churches claim to be friendly,” Charlie continues, “but are very difficult for a newcomer to break into the social circles. There is a difference between being friendly and being inclusive. What made a difference in both our lives were people who not only said hello to us when we went to church but who said, ‘Come over for dinner!’ or ‘Let’s get together and talk!’” 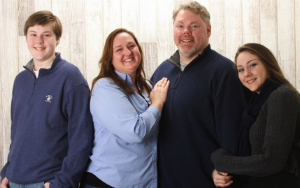 Since receiving God’s call to plant a church, Charlie and Rebecca have dreamed of a community of faith that would be genuinely welcoming, authentic, and focused on mission. That’s why one of the phrases Charlie uses to describe Momentum’s approach is “real simple church.” In an age where worship services have become overly programmed, Charlie suggests that much of the faith community has lost sight of the object of our worship amid all the packaging. “When we package worship in such a production-oriented fashion and only put on shiny, smiling perfect people on stage, people are often left with a picture-perfect image by which to compare themselves,” Charlie explains. “In short, people’s lives are falling apart and we’re spending our time on lighting, media, and presentation.”

Charlie also underscores the value of simplicity in mission and planning. He says that structures, plans, and goals should be simple enough to communicate to the congregation. “Churches try to do too much and appease too many people,” Charlie asserts. “Find the two or three things your church does well, and run with them. People appreciate this in an age of complexity. Every time you have an activity or event, define the one thing you hope to accomplish. Celebrate that success. Everything should have a clear purpose and a clear way to measure its success. If you’re asking for money, be clear. If you’re asking for volunteers, be clear. This removes hidden agendas and builds trust. This creates momentum!”

From the very beginning, Momentum Church has aimed high. Their goals aren’t based on half-hearted wishes, however. They’re believing in a God who added three thousand people to the church in one day in the book of Acts. Considering that 70 percent of the area population does not attend church regularly, Momentum believes that ultimately the church will reach 10 percent—seven thousand people added to the kingdom of God. “We wanted to create the culture early in which we embrace the fact that we serve a big God and he is able to accomplish great things through willing servants. There’s a high level of ownership here at Momentum. People are jumping in and contributing right away. We are part of a growing, urban culture here where people embrace big ideas and want to be involved in something that makes a tangible impact. We believe this region is optimal for a great movement of God.”

Momentum Church is witnessing firsthand a powerful move of the Holy Spirit. They are incredibly grateful for the support of Indiana Ministries and the great number of congregations that have come alongside them to bring them to this point. Please pray for the momentum to continue!